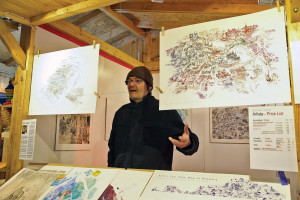 Christmas is near. The markets are open, it is getting colder and more places are offering mulled wine to warm up. It can be stressful finding gifts for our loved ones. A special present might be one of graphic designer Béla Magyar’s drawings: these not only tell the story of a city but also of a man who once hit rock bottom.

When you walk on Déak Ferenc utca towards Vörösmarty tér, you pass market stalls offering not only traditional Hungarian dishes but also all kinds of handmade goods: toys, pottery, soaps and more. Right in the middle, Magyar is selling his art this year. Hardly anyone who passes the wooden hut, decorated with fairy lights and fir branches, fails to at least cast a glance at the colourful sketches of Budapest.

“I had never thought that I would sell my pictures,” says the 61-year-old. He started to draw during his architectural studies in the mid-1970s, and “does not even remember why”. Later, when he began to work as a graphic designer, he put pens and paper aside for more than 25 years. “I completely forgot to paint,” he says.
During the communism era his building designs and his conception of aesthetics, the connection of different materials, were not recognised. “Not even my teachers liked them,” he says. Nevertheless, as a trained architect his heart beats for buildings.
Magyar is inspired by the works of surrealist artists. He “does not copy the drawing techniques but their way of thinking”. From the books of Colombian writer Gabriel García Márquez he “learned a lot. Márquez writes important things in brief, sometimes in only one sentence. Unimportant things are sometimes described on several pages.”
And this is how the artist worked: big buildings with several floors he drew with only two or three floors, but very detailed so “you can see every brick”. This way, viewers always discover something new, even after several times.
For Magyar, Budapest is “a living creature with a long history that is constantly changing”. He grew up in the city and knows it like the back of his hand. This story is reflected in the old, slowly decaying buildings but should not be forgotten. In his pictures he processes not only the story that is told by the city, but also his personal life story. 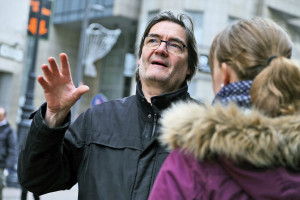 Previously he worked as an editor of architectural magazines. Later he began to design newspaper covers and logos. Magyar spent much time in printing houses and learned the processes. “For me, a picture will only be complete when it is printed and not when it is painted,” he says.
But in 2013 his life took a dramatic turn. After his company went bankrupt, he lost his job, his house and his long-time partner. Béla Magyar faced the ruins of his existence. He “no longer wanted to distribute homeless newspapers”, and was looking for a way to escape the spiral of unemployment, alcoholism and self-reproach on his own.
After nearly 30 years, he went into his cellar and pulled out the old drawings and set up his present company, Citygraph. He began “to work up the images and digitise” them. “Today I can live from the sale of my pictures,” Magyar says proudly.
All images that he sells today come from his student days. They were simply digitised, enlarged and printed. “Back then there were no drones or anything”, so Magyar photographed houses and sites, drew them and gradually added the individual drawings together into one large art piece.
His most successful picture is “Bird’s Eye View Map of Budapest”. This took him 1000 working hours. Since he wanted to represent the development process of Budapest, he also used books with old pictures. “People should know the buildings in detail,” he adds.

However, his drawings are not quite the ones they used to be 30 years ago. To digitise them, he totally redrew them with a technical pen. Through this process he developed them and added new sections.
His work “Judith”, which he began to draw in 1983, still has many open spaces and will be repeatedly developed by the artist. Pictures that were previously only black-looking shine in bright colours today. Due to the high quality of the prints allowed by the technology of the 21st century, “pictures can survive up to 200 years without loss of colour”.
Magyar has not drawn new pieces lately because he needed all of his energy “for trying to get back on my feet. But I hope that my sales are so successful that next year I can paint new pictures. I feel better than ever. That’s the best part of my life”.
Meanwhile the artist is to be found not only at the Christmas market. He maintains a web shop and a studio in Hermina Galéria. Furthermore his product range is not limited to his printed drawings but offers T-shirts, bags and other gift items with his motifs.