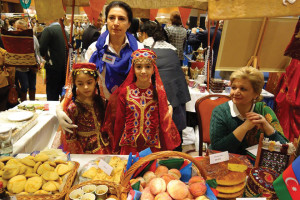 Forty embassies will be exhibiting their countries’ characters in specialties and souvenirs at this Sunday’s fifth annual Diplomatic Fair, with exotic items on sale just before Christmas and all proceeds going to charity.

About 25 countries will offer their national food and drink in the refreshment area, and frequent entertainment segments will include dancing and musical interludes from Thailand, India, Republic of Korea, Palestine, Serbia, Kazakhstan, Azerbaijan, China and others.
The fair is organised by the Diplomatic Spouses of Budapest and the InterContinental Budapest, where the extravaganza is being held from 10am to 4pm. It will be opened with a performance by Hungary’s ExperiDance, who fuse traditional Hungarian folk dance with modern styles and motifs.
There will be a children’s corner and raffles. The purpose of the fair is to create an entertaining day for the whole family in the spirit of the festive season, to present each country participating, and to raise funds for Hungarian charities.
Charities supported by Diplomatic Spouses of Budapest are A Mi Házunk, a children`s Home in Esztergom (educational program for Roma children); Kossuth Zsuzsa Gyermekotthon (orphanage in Bicske); Sofi, special education and development institute for educationally challenged children in Budapest; and Cházár András Egymi, special educational Institute for deaf and hearing-impaired children in Vác.
The event is organised under the patronage of Mrs Anita Herczegh, wife of the President of Hungary. Entry is HUF 500.