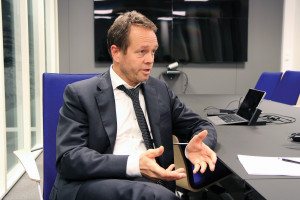 The MOL Group is not only active in processing and selling natural oil, gas and corresponding products, the largest Hungarian multinational company is taking on a growing share of oil and gas production as well. The most recent acquisition in this area is a Norwegian company, which concentrated on seeking natural oil and gas on the coastline of the Scandinavian country. The full overtake of Ithaca Petroleum Norge by MOL will be concluded in July.

The Norwegian company founded in the 1990s used to be part of the British Ithaca Energy Inc. When they had to sell their Norwegian branch for strategic reasons, the Hungarian MOL Group showed up as a potential buyer this spring and a little later their offer successfully won over the other bidders.
Now 20 geologists are working under the leadership of Lars Thorrud, the MOL Group’s business director, and the name of the Norwegian company was changed to MOL Norge. The logo of the new owner is hanging in a clearly visible spot at the entrance of the open-space office in a modern office building in Oslo.

Within the offices you can’t really feel the presence of the new owner, either visually or in any other way. They have exclusively employed Norwegians here up until now. However, Thorrud’s team will be expanded with four Hungarian geologists in the near future, for the MOL Group reasons that building a tighter relationship with the parent company is desirable.
To the question of whether Hungarian geologists are able to help with their know-how in the search for oil at the Norwegian shores, Thorrud explains that the formation of oil-bearing rock layers has been a similar process all around the world, and therefore the seeking of oil happens according to similar parameters and aspects everywhere.
“In the process it’s irrelevant whether the oil-bearing rock layers are out in the open or covered by water at the moment,” he says. The geologists are travelling regularly to study oil regions lying on dry ground, for example to the USA, in order to gather experience to understand the circumstances on the Norwegian continental shelf. In this respect the “mainland knowledge” of the future Hungarian colleagues will be also very valuable.
However, the knowledge transfer will not happen in only one direction. Dominic Köfner, director of communication at the MOL Group, explains that the takeover of the Norwegian company does not only aim for the possible discovery and later production of Norwegian oil, but also about gaining the know-how, which is applicable worldwide later on, “whether in the North Sea or in other regions of the world”.
With that the expert suggests that the MOL Group is still considering activities in fully new locations in addition to the already existing production locations. In terms of concluding new acquisitions they are not in a hurry, since even though oil prices have clearly reduced worldwide, the prices of companies working in the upstream sector are not appropriately attractive yet.
“The pricing still needs to adjust,” Köfner thinks. However, they are already examining possible options in detail. In case the MOL Group would stumble upon a lucrative possibility in order to further expand its activities in the so-called upstream sector, the needed financial reserves are available for any kind of situation.

Currently the MOL Group is active in 14 countries concerning the exploration and production of natural gas or oil: in Central-Eastern Europe, in Northern Europe, in some countries in the territory of the former Soviet Union and in both the Near East and Middle East.
While in some countries they are doing very well – “Pakistan is a great success story for MOL” – or at least giving a solid performance, the risks in certain countries have clearly increased recently. For this reason they already had to draw back from Syria, where MOL Group was active via its Croatian subsidiary INA.
The engagement in the Kurdish Erbil was also scaled back due to “increased security risk” and “unsolved financial risk with the Kurdish public administration”.  “However, we are not planning to bring our local activities there and in the region of Kurdistan to a complete stop,” Köfner clarified immediately.
In any case they would like to compensate the increased risk at certain MOL locations with a growing engagement in politically secure regions. The expansion of MOL activities in and for Scotland and the acquisition of the Oslo exploration company both serve this aim.
“Norway has an immaculate reputation worldwide due to its transparent and investor-friendly climate, and its modern infrastructure for the exploration and production of oil and gas,” Köfner said.
When awarding exploration and later production licences there is no discrimination at all regarding the national origin of the bidding company. “Only the quality of the application and the sound background of the applicant matters,” Thorrud emphasises. In addition to this Norway attracts potential investors with a very attractive tax model.

Thanks to MOL Group they may bore more and deeper 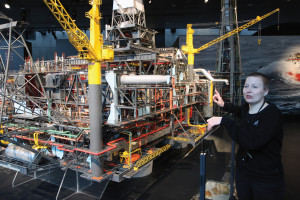 As for Thorrud, the Hungarian takeover was rather surprising.  He openly admits that he only heard about the MOL Group before as a sponsor in motorsport. However, he quickly got an impression of the company and in the meantime – based on the first experiences of doing business together – he is very happy that he has the opportunity to work for such an owner as MOL.
The main reasons for this are the “financial stability and long-term opportunities”. These opportunities mean among other things that Thorrud and his team are able to apply for new exploration licences with clearly more confidence, being backed up by such a potent partner as MOL.
At the moment they are applying for five further licences in addition to the 14 already existing ones. Furthermore, they have signed a so-called farm-in agreement with the Det Norske oljeselskap ASA company for three additional Norwegian North Sea licences.
According to Köfner’s words, MOL will now provide the financial background to enable significantly deeper test drillings than the usual practice used to be at the Norwegian company, making sure that they make the most of the available licences. Although this will increase the amount of necessary investment, the chance of getting lucky and finding oil also increases at the same time.
MOL Norge does not execute the test drillings themselves, they outsource this activity to a so-called operator, who has the necessary equipment and experience. The operator executes drilling at those spots under the sea which are marked for him by Thorrud and his colleagues.
Although the likeliness of success can be enhanced through the precise preliminary investigation of the territory, at the end there is always a certain luck factor. Also because for financial reasons it’s not possible to “punch through” with a tight net of test drillings the whole territory for which the company owns a licence.
As an example, Thorrud mentioned the recent superb oil discovery in Johan Sverdrup Field, 140 kilometres from the south Norwegian coast, where only the third owner of the territory’s licence got lucky. But then it was a real success: “They have not found so much oil in the Norwegian area since the 1980s,” he said. Since such strokes of luck happen, it’s not easy to tell how much oil there can be found in total under the Norwegian continental shelf.

Aside from the luck factor, it can be assessed that success, just like in so many other fields of life, is most likely to fall into the most capable hands. So Thorrud is sure that a persistent and thorough search will sooner or later bring success, namely the finding of an oil or gas layer.
Finding the right search strategy also helps. For MOL Norge this means for example that when they are applying for new licences, they always concentrate on a fixed region, and if possible they try to ensure the rights on the neighbouring search areas as well. While the licence map of other exploration companies looks like a patchwork quilt, which is drawn across the whole Norwegian continental shelf, the current research territories of MOL Norge are relatively close to each other at the south Norwegian coast about the level of Stavanger, the fourth-largest city in the country.
Once you own the exploration licence for a certain territory, you have two years to answer the question “Drop or drill?”, and if the territory looks “dry”, the licence should be given back, or in the positive case, when something is found, they can apply for a production licence and begin with producing oil or gas.
If the colleagues of MOL Norge manage to hit an oil or gas field one day, they will outsource production to an operator as well. It’s not planned in the near future that MOL will become such an operator via a consortium, but in the middle term they would like to develop to become a conveyor themselves in this region; not only because of the cost intensity but also due to the special know-how, a certain time is needed to prepare for this activity. MOL Group is active in producing oil or gas in eight countries actively, however all former production sites can be found on the mainland.
So in case of success, first an external service provider will be contracted to pump the oil for MOL out of the Earth. As soon as the “MOL oil” hits daylight, it will be traded on the global market by Total and Shell, just like all the oil produced on the Norwegian continental shelf. “So it will not be the case that the MOL Group fills its oil produced in Norway in tankers and delivers it to a refinery owned by the MOL Group,” Köfner clarifies. That would not make sense in terms of economics.

Much closer to the shared goal

So the MOL Group now plans to continuously invest in discovering new oil fields and persistently seek them out. After all, following the Norwegian acquisition now they own twice as large a global net than before, namely an area under which about 600 million barrels of crude oil can be found, according to the estimations. So the day when the MOL shareholders can be happy about the news of a large oil discovery has moved much closer thanks to the takeover of the Norwegian company.