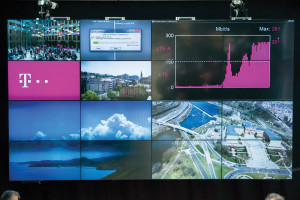 For the first time in Hungary, on December 3 the mobile internet service offering up to 300 Mbit/sec nominal download speed became available on Telekom’s network in Nyíregyháza,the first station of the Digital Hungary programme. This is the fastest mobile Internet technology available in Hungary today.

The technology enabling this transmission speed is LTE-Advanced, representing the next grade of 4G. Telekom’s 4G mobile internet service reached the 97 percent population coverage planned for this year, and the number of users exceeded 800,000.
Telekom announced exactly one year ago that they have tested the 300-mega­bit technology at multiple locations in Budapest, and today they have turned on the super-fast mobile internet service at nine stations in Nyíregyháza. Within the areas covered by the LTE-Advanced technology the clients may take advantage of up to double data download speed using capable devices and tariff packages.
The significance of LTE-Advanced can be felt mainly during activities involving high volume data traffic, such as downloading music, down- and uploading video content or applications, since it allows customers to take advantage of higher speed and better user experience even at peak times or mass events, for example in stadiums or at festivals. 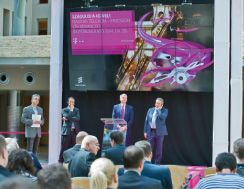 In April, 2014 the test of the LTE-Advanced technology by Telekom and Ericsson was the first in Hungary.

The LTE-Advanced Technology allows mobile services providers to use their available spectrum in a more efficient way and reach higher download speed.
The advantages offered by the LTE-Advanced technology can be enjoyed by the impacted citizens by using 15 types of smartphones by six manufacturers out of Telekom’s current offer, using the service provider’s Next M and Next XL package for smartphones, or the Net&Roll M and Net&Roll L mobile internet packages.
Telekom developed domestic residential outdoor 4G coverage to almost complete, up to 97% during 2015, with a speed reaching the maximum of 150 Mbit/s in most of the country. Telekom’s 4G services are currently used by more than 800,000 clients.

By 2021 the mobile data traffic will increase almost tenfold

According to the most recent Mobility Report of Ericsson (Nov. 2015), by the end of 2021 global mobile data traffic will increase almost ten times, to 51 Exabyte monthly. The number of smartphones in Europe will increase to 880 million and more than 70 percent of mobile telephone subscribers will use smartphones. In Western Europe, by 2021 the data traffic per smartphone will increase from the current 2 gigabytes to 18 gigabytes. All these will largely increase expectations versus mobile networks.