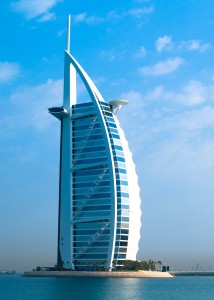 Strictly speaking, a hotel can have a maximum five stars, courtesy of rating bodies such as AAA and Forbes. Normal rules don’t apply at the super-luxurious Burj Al Arab Jumeirah in Dubai, which does in fact have an official five-star rating but is widely described by one and all as being “seven-star”. How else to describe the roof helipad, on-call Rolls-Royces, 2,000 square metres of decorative gold leaf and exquisite dual-level suites serviced by butlers? 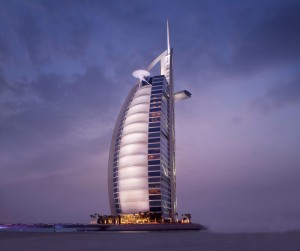 The Burj Al Arab is the much-photographed “bendy” sail-shaped hotel, probably instantly recognisable to nearly everyone as being in Dubai even if they don’t know its name or have a bank balance like Roger Federer or Tiger Woods to stay there.

The hotel opened in 1998, and while luxury on such a scale quickly saw it become the first hotel to be repeatedly referred to as “seven-star”, interestingly the hotel says the label originates from an unnamed British journalist on a press trip, and that they neither encourage its use nor use it in their advertising.

The Budapest Times has honoured a number of luxury hotels with its presence but never one where a helipad is the ultimate way to arrive. Visitors who arrive by helicopter will experience a 15-minute birds-eye-view of the extraordinary city, culminating in a dramatic landing on the hotel’s 28th level.

One-way airport helicopter transfer costs 10,000 Emirati dirhams (AED) (HUF 800,000) for one passenger and AED 1,500 (HUF 120,000) for every additional passenger, to a maximum of four passengers. Prices include access to the Al Majlis airport VIP lounge.

A passable alternative for the more frugally inclined is to be collected from the airport in one of the Burj Al Arab’s dozen-or-so white Rolls-Royce Phantoms, with the chauffeur, naturally, in matching white uniform. One-way airport transfer ranges from AED 900 to AED 1300 depending on the season. Hourly rate is AED 2000 and maximum capacity is three passengers. Airport transfer is also catered by Mercedes S400s and GL450s at a lesser rate.

Stepping out of the Rolls and into the sumptuous Burj Al Arab atrium, an explosive fountain shoot high into the air and rows of lavish designer shops are ready with that little jewel-encrusted souvenir for a loved one back home. 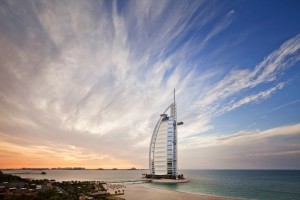 The hotel’s suite-only accommodation offers a dedicated reception on each floor with check-in conducted in the privacy of the individual suite, all 202 of them. Butlers are in attendance 24 hours a day to address the needs of each well-heeled guest, and with over 1,600 staff from 75 countries, the Burj Al Arab has a staff-to-suite ratio of 8:1, which it says is one of the highest in the world.

Conducted to the suite by one of these Jeeves, the full induction of the facilities takes a while, as the remote control induces a TV screen to shoot out from a mahogany desk, sends the blinds up and down, and operates various other indispensible conveniences. The butler will ask whether you would like assistance unpacking your luggage.

All the accommodation consists of these luxury two-floor suites each pushing the boundaries of lavishness with plush carpets and pristine furniture, a computer in each room, 17 types of pillow that can be selected from a menu and availability of a gold-plated iPad.

Burj Al Arab has nine signature restaurants and bars, including the famous Skyview Bar that hangs out in the air near the top of the 180-metre-tall building, and the Al Mahara Restaurant where you dine next to the sea creatures in a large wall aquarium.

The sumptuous Talise Spa is likewise perched 150 metres above the Arabian Gulf. There are four swimming pools (two outdoor and two indoor) and a private beach. The fleet of luxury cars is available for hire and offers Aston Martin, Ferrari and Lamborghini. A helicopter tour of Dubai can be booked for AED 13,000 (HUF 1,040,000) for four passengers. 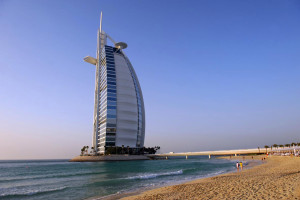 The suites are priced from £878 (HUF 390,000) per night for the deluxe duplex one-bedroom version, which at 170 square metres is the entry-level category.  It may be too frightening to ask the cost of the Royal Suite, even for Mssrs Federer or Woods, which at 780 square metres has exquisite furnishing, a library and cinema room, meeting room and two master bedrooms with revolving bed and full-size Jacuzzis. It also has a private lift.

The Burj Al Arab is operated by Jumeirah Hotels and Resorts, founded in 1997 with the aim of becoming a hospitality industry leader through establishing a world-class portfolio. They now have swishy properties in Abu Dhabi, Baku, Bodrum, Frankfurt, Istanbul, Kuwait, London, the Maldives, Mallorca, Rome and Shanghai, plus several in Dubai, and thus may be fairly said to have already achieved that aim.