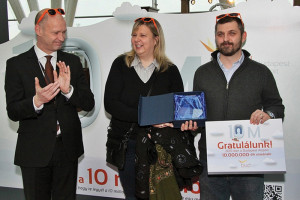 At noon on a mid-December day the number of passengers at Budapest Airport reached 10 million for 2015, a record. The milestone was passed by a married couple from Tata who can spend a four-day weekend in Istanbul as a result. 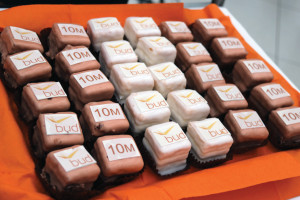 Agroup of Liszt Ferenc Airport employees greeted Zsolt Lukács and his wife Judit in Terminal 2A. To commemorate the record, airport CEO Jost Lammers received them in SkyCourt, also offering cakes to other passengers in the terminal.
The tickets and the weekend in Istanbul are courtesy of Pegasus, the second-biggest airline of Turkey. It entered the Budapest market in July 2014 and by last summer was operating five flights a week between Budapest and Sabiha Gökçen airport with modern Boeing 737-800s. “This is a proud moment for Budapest Airport, as surpassing the 10 million mark speaks volumes for our hard work and our staying power as one of the leading airports of Europe,” Lammers said at the ceremony. “Our strategy for 2015 has been to seek out new and exciting destinations, as well as solidifying our position in Central Europe. 2016 is already set to be even busier as we continue to do all we can to ensure Budapest, and Hungary, remain an attractive market, while we ensure the demands of our catchment area and beyond are met.” 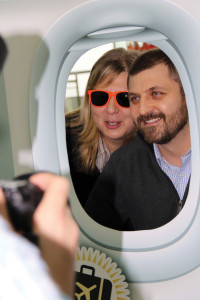 Achieving the record traffic was driven by new flights launched last year, extended airport capacities and increased frequencies, as well as the continuously developing touristic offer of Budapest and the favourable price/benefit ratio for foreigners. The average growth of traffic in 2015 exceeded 12% until November, more than double the European average, making the facility one of the fastest growing on the continent. Three new airlines came to Budapest in the past 12 months and 18 new flights were launched. Looking at the whole year, 100 routes of 44 airlines were available.