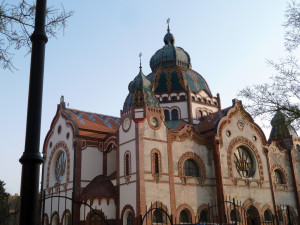 If you are an Art Nouveau partisan I highly recommend a visit to the town of Subotica, or Szabadka as it is known by Hungarians. This very deluxe town with such a nice sunny feeling is in northern Serbia, 10 kilometres south of the border with Hungary and similar to Szeged.

For those who have been this way before, this may not come as much of a surprise, and one could also include Timisoara, namely Temesvar in Romania, within a sight-seeing triangle. All were once part of Hungary pre-Trianon 1920 and all are at reasonably close crossroads with one another on the map. Subotica with its colourful, Mediterranean atmosphere is my favourite place in this region.
This artistic wonder is on the vast Voyvodina flatlands that continue from the sweeping and identical Hungarian Puszta. Travelling through these wide, open plains, by bicycle for instance, with a light sunny breeze is exhilarating in spring and autumn. But road and rail conditions in summer can be very demanding with the heat and dust of the day, as one ventures this way towards the Balkans.
If you like adventure but time is short, take the regular, three-hour inland train from Budapest Keleti station to end-stop Kelebia. Then cycle 20 kilometres to Subotica from this quaint border village. At time of writing, a passport is still required because Serbia is not part of the Schengen zone.
Once cleared by the authorities at the frontier, continue to follow the main road and the Subotica town hall tower will soon appear on the horizon. Everything from this point onwards is very easy to find, as well as obtaining Serbian dinars either at the border or in town.
Once in town, an array of charming and colourful secessionist buildings appears, mostly early 20th-century Art Nouveau, designed by Marcell Komor and Dezső Jakab, the town’s architectural legends. It is easy to orientate oneself from the town hall as all other attractions fan out in every direction from this obvious landmark. The tourist information office is in this alluring, deep cherry red building, as well as access to the tower for a fine view of the town.
The street cafés are often in full flow regardless of day or night. They line the Korso pedestrian streets and face the elegant neoclassical People’s Theatre with its deep orange façade and Corinthian columns. 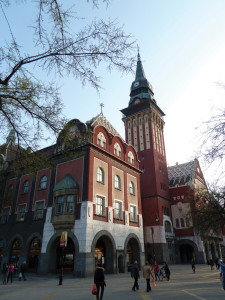 Close to the buzzing atmosphere is the exquisite synagogue built in 1902. Once again, the elaborate use of fine Zsolnay touches, terracotta ornaments, stained-glass windows and vivid floral motifs sees the synagogue at its most dream-like and beautiful, with further exquisite samples of Art Nouveau on the outside and wondrous décor inside.
Regrettably this other-worldly masterpiece was trashed by the Nazis in the Second World War and restoration work was slow until recent times. It is now possible to see inside this fine place of worship after years of closure.
Much can be said in similar tone for the fine Raichle Palace art gallery, facing the train station. Not forgetting the town’s Savings Bank, the Tenement Palace, the Austria-Hungarian Bank, the Papillon Café, the green and blue Zsolnay fountain and many others.
Near the synagogue is the fine marketplace and various buffets serving pleasing Balkan specialities at budget-friendly prices. Try Cevapcici, which consists of mini sausages in a bread roll bap, served with soup and salad. Pljeskavica, another national dish of Serbia, consists of meat, chips and a portion of lecso vegetables cooked in a mild spicy sauce. Then there are the regular  kebabs, bureks and baklavas that are instantly available and all delicious.
There is Hungarian influence in town. Street names and various buildings are often labelled in Hungarian alongside Cyrillic Serbian. So coming to Subotica from close by should not be much of a culture shock. I do not speak Serbian but communications are fine. Many friendly local people speak English and help me along the way. My foreigner’s Hungarian also gets me by.

A visit to Subotica is not complete without visiting Lake Palic, eight kilometres eastwards and another compulsive must-see for Art Nouveau enthusiasts. This swish, elite summer resort really comes as a surprise with its very well attended park and gardens, similar to any environment on the French Riviera. Unfortunately as of now, the lake is not suitable for bathing. Once this has been remedied, Palic will again be a fashionable, renowned resort.
Finally, for those searching for Yugo-Nostalgia there is, or definitely was, a Yugo-themed park called Yugo-Lend, 10 kilometres south of the town and commemorating all things Yugoslav during the twilight years of dictator Josip Broz Tito. This three-hectare orchard is redesigned into former Yugoslavia, highlighting each region’s distinguishing landmarks.
As I walked around, there were various Tito street names in place, prominent red star Yugo flags flying high and representing grandeur. Yugo-Lend started up at a delicate time, when in 2003 what was left of Yugoslavia finally lost its identity and became Serbia.
Nostalgia was high for some as Yugo-Lend soon attracted a following. I was invited to this “Yugo-Eden” by its president, who I met by chance at a Palic wine festival and who was quick to tell me everything great and wonderful about Yugoslavia. How could I refuse?
The ironies are now many as I recently heard that Yugo-Lend had closed down, perhaps only temporarily. I am not sure if it is possible to visit this place today because there is almost no tourist information available, just occasional news bulletins found online. Up-to-date inquiries are needed beforehand to find out if there is anything left to see there.
Glorious Subotica makes a wonderful weekend break. Should you wish to venture onwards, there is Novi Sad, or Újvidék to give it the Hungarian name. This fine university town with the Petrovaradin Fortress and its distinctive famous clock overlooking the city is very much worth a visit. Finally at the end of the railway juncture is intriguing Belgrade, where one changes trains for the oriental atmosphere of Nis, which is another story and also highly recommended.

Subotica is half-way between Budapest and Belgrade. At time of writing, new improvements will be carried out with this international train service. Check the MÁV Hungarian Railways website for the latest timetable information. There is also a Budapest-Szeged-Subotica bus service.
Driving from Budapest on the M5 on to Subotica via the busy Rözske-Horgos border is simple enough. It is far quicker than driving through the pleasant enough but sleepy atmospheres of the towns and villages on the dust-ridden single lanes to Kelebia, despite being a less congested border.

Although this is supposed to be a light, cheery article about tourism, I end on a troubled note. The last time I was there was in mid-summer 2015, before the refugee crisis got really big. The new controversial razor-wire fence is fully operating alongside all of southern Hungary.
Should you, dear reader, wish to visit Subotica, may I advise getting up-to-date information about    these mentioned border crossings because new regulations may be in place due to security reasons. Bicycles may not be permitted to pass through Kelebia until further notice. At time of writing, I am not sure. Good luck and enjoy Subotica! I shall return.