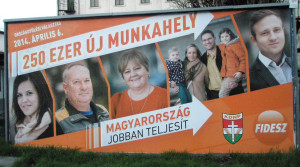 Regarding the Hungarian election system restructured between 2010 and 2014 it can be stated that it has not made its creators invincible. While a large number (but not all) of the system’s new components can be said to be applied by other countries as well, its constituent parts converge to create a whole where the current
governing party is granted a significant and unjustified – although not insurmountable – advantage over its rivals. However, in criticisms levelled against the election system arguments challenging the system’s democratic credentials and choice of political values and interests are often conflated.

The lack of regulation concerning campaigning outside the official campaign period

Since the campaign period starts 50 days before the election and there are no legal guidelines for the preceding period – i.e. the political parties are free to campaign, and they are not required to make an even symbolic account of the incurred costs – obviously the parties with significantly larger funds at their disposal than their rivals are in a much better position to exploit this legislative loophole.

Election campaign regulations are not extended to civic organisations

Neither the election procedures act nor any other act regulates the campaign activities of civic organisations and their accounting obligation doesn’t even come close to that applied to parties, which means that parties with the strongest financial backing enjoy disproportionate advantages. They are in a position to outsource a large part of their campaign to civic organisations, spending well over the established HUF 995 million limit.

Discrimination in transparency regarding list prices for political advertising

The discriminative practice where the print media was required to publish its list prices for political advertising, while transparency does not apply to public-space ads, has been clearly tailored to favour Fidesz and its business friends.

Some regulations covering election campaigns should be extended beyond the campaign period, and strict regulations should be passed as to prevent the outsourcing of the election campaign to bogus civic organisations. While working out the details of these regulations is undoubtedly a complex task, getting the job done is essentially a matter of political will (or, it is feared, the lack thereof).
Whether the publication of list prices for public-space advertising becomes law is likely to depend on the shape of the market following the break with Lajos Simicska.

Campaign regulations do not offer a level playing field for all the parties. While under the letter of the law all parties are treated as equals, the incumbent government always enjoys an unfair advantage.

The regulation of political advertising in commercial television and radio

The government in office can run an “information” campaign in commercial television and radio in the campaign period and beyond, whereas the other parties have no access to these platforms.
Originally Fidesz planned to ban political advertising in commercial television and radio, although when the Constitutional Court threw out the relevant passages of the election procedures act, within the framework of the fourth basic law amendment the government raised the state of unconstitutionality to a higher level. Eventually, under pressure from the European Commission in September 2013 it made a correction without resulting in real change: with the introduction of mandatory free advertising it left the commercial media no option but to turn down orders for political advertising, i.e., it managed to banish political advertising from commercial television and radio without administrative measures.
Clearly, the reform intended to make it more difficult for parties to reach voters turning their back on politics (the introduction of preliminary registration would have had the same effect, although the idea was eventually dropped by Fidesz).
Limiting political advertising in public media channels

While it has less effect, Fidesz also managed to limit political advertising in public media channels: opposition parties must share a total of 470 minutes in advertising time, even as there is no time limit when it comes to government advertising.

Access to public-space advertising by the parties and the government

Ordinance-level regulations related to public-space advertising had been modified three months before the 2014 election as to authorise the government to advertise free of charge in some media, while denying the same to other parties. While on March 17, 2014 the Curia resolved the situation, by that time all opponents of the governing party suffered a competitive disadvantage on a scale all but impossible to quantify. There are no guarantees that the same situation can be avoided in the course of a future election.

As a general rule, in all media where campaign activity is banned for opposition parties, advertising by the government, local governments and civic organisations should be banned as well.
Since commercial television and radio stations reach the largest number of citizens, the statutory environment should be changed as to make commercial media have a vested interest in accepting requests for advertising, i.e., in return for broadcasting ads, they should be allowed to charge for air time. Following the introduction of campaign financing involving hundreds of millions, the government’s argument that free advertising makes the campaign cheaper can hardly be taken seriously. As it would work against its interests, the government is not expected to change the regulation; making it more difficult to reach apolitical voters is a key component of the election regulatory environment created by Fidesz.
In this light, it cannot be expected that any of the problems delineated above would be remedied until, that is, Fidesz leaders come to feel that they may lose power.

Components unpredictable in the long term, working for Fidesz in the short term

A system defined by campaign financing and the nomination process 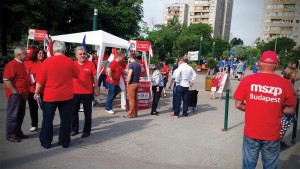 Earlier, extremely stringent nominating criteria have become significantly easier thanks to the election reform. Until 2010, to field a candidate a party had to collect the signature of roughly every 60th citizen, and since 2014 every 150th will do. In a further easement, a citizen may support more than one candidate with his/her signature.
Whereas in the earlier, byzantine system built on territorial lists 36,750 recommendations were needed to make sure that votes could be cast for party lists in all polling stations of the country, in today’s exclusively national list system 13,500 recommendations suffice. The easement of the nominating process on multiple levels would be a welcome development even if one admits that the decision-makers were clearly guided by political objectives. The radical reduction of the number of required signatures and the introduction of multiple nominations – with the simultaneous fulfilment of other criteria – may contribute to making the political offering more diverse.
However, in conjunction with campaign financing regulations, the nominating process has evolved into a system that in part benefits political opportunists, in part is equally suitable for misleading voters, invites fraud and simultaneously puts the fairness of the elections in doubt. For an extremely generous state campaign financing system has been introduced, and based on its detailed regulations we can state that the system has been conceived as to invite the founding of sham parties:
Individual candidates receive HUF 1 million and parties, depending on the number of their candidates, anywhere between HUF 150-600 million.
While individual candidates receive state funding through a card issued by the Treasury, as to prevent the withdrawal of cash, parties have access to funds in cash amounting to hundreds of millions.
Even as individual candidates must make detailed accounts of the funds received, the parties face extremely lax accounting obligations.
While individual candidates must repay the entire amount if they fail to receive a minimum 2% of the votes cast, the parties have no such obligation even if they fail to receive a single vote.
If one considers the institution of multiple recommendations and that today the parties collect signatures on recommendation sheets, it becomes evident that nothing prevents the parties from exchanging voter data and thus become eligible for generous state campaign financing.

Unless the system is changed, as in 2014, in 2018 billions of taxpayers’ money may flow without any control to “parties” without a serious political agenda to speak of.

In and of itself, the reduction of the number of signatures and the easement of nominating procedures would, in all likelihood, not lead to fraud. By itself, the option of multiple nomination cannot be considered flawed, although its introduction would have required more careful preparations. If it is to be maintained, election commissions and offices would require additional powers and longer deadlines to screen out fraud tied to data copying. Otherwise, the chances of being caught will remain negligible and a muddled nominating process will continue to threaten the fairness of the elections.
Beyond this minimum requirement, we are well aware that the nominating process can be placed on an absolutely clean footing if parties were denied the right to manage voter data, i.e., the system based on the collection of signatures were to be eliminated. However, this goes against the parties’ need to build data bases, which means that in the foreseeable future we are unlikely to be rid of this antiquated system.

The question arises why Fidesz considered it wise to encourage with such vigour the emergence of irrelevant political parties. In theory, the large number of individual candidates and national lists may actually improve the chances of the opposition in the event that a formation capable of splitting the Fidesz camp enters the ring. Presumably, Fidesz took the risk of setting up a chaotic system with the knowledge that formations capable of attracting disappointed leftist voters were ready to enter the fray, and at least in 2014 its bet paid off. This doesn’t mean that in a different political climate, unlike the one prevailing in the spring of 2014, the proliferation of sham parties could not backfire.
In conclusion, Political Capital and Transparency International Hungary’s October 2013 initiative for the amendment of the campaign financing act remains relevant to this day, and while the government side has yet to show interest in resolving the issue, the reform of campaign financing regulations openly compromising the fairness of elections could actually be put on the agenda