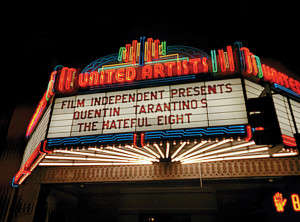 Surprise, surprise, some people are being shocked by provocative auteur Quentin Tarantino’s new film “The Hateful Eight”, which is in Budapest cinemas now. One of them is Italian film music composer Ennio Morricone, who says he is alarmed by the violent sequences – even though it is his praised score that helps heighten the tension.

“The Hateful Eight” is shot in Ultra Panavision 70, an arcane camera process last used in the 1950s and 1960s on horizon-stretching extravaganzas such as “Ben-Hur” and “The Fall of the Roman Empire”. It is the first film to use the process since “Khartoum” in 1966. Strange, then, that much of the almost three hours film takes place inside a shed.
The title suggests a sinister retread of “The Magnificent Seven” but it actually has more in common with a classic Agatha Christie drawing-room mystery – albeit one that descends into the kind of grotesque blood-letting that would probably cause Hercule Poirot’s moustache to unfurl before the elegant Belgian detective fainted face-first into a spittoon in the corner.
Here are eight of the orneriest varmints Tarantino has yet dreamt up – a rogue’s gallery without anyone to root for, and a soundtrack with 50 minutes of original music by Morricone plus three songs by The White Stripes, Roy Orbison and David Hess. The soundtrack won a Golden Globe for Best Original Score – Motion Picture this month.
Tarantino accepted on behalf of the 87-year-old Morricone. “This is really cool,” Tarantino said. “As far as I’m concerned, he’s my favourite composer. And when I say favourite composer, I don’t mean movie composer, that ghetto. I’m talking about Mozart, Beethoven, Schubert. That’s who I’m talking about.”
As Tarantino collected the Golden Globe at The Beverly Hilton Hotel on January 10, Morricone was readying his “60 Years of Music World Tour”, which reached Budapest’s Pápp Lazló Sportaréna on Sunday. With over 500 film and television soundtracks bearing his name, his opinion of “The Hateful Eight” should deserve hearing. Or, in old age, has he just become a boring old fart?
The composer admits that he was “nervous” about working with Tarantino on the epic western because “I thought he deserved something very special for what he had done [with the film]”. It is Morricone’s first western score for 40 years.
He added: “I have been impressed and even shocked by the violence of some of his sequences… but after giving a second thought to that I realised that yes, we are shocked by the horror of this violence, but if we think of the victims of this violence we realise that Tarantino’s position is always on the side of the underclass.”
Morricone may win more. “The Hateful Eight” is nominated for three Oscars on February 28: for Best Original Score, Jennifer Jason Leigh for Best Actress in a Supporting Role and Robert Richardson for Cinematography.
Tarantino offers his signature mix of action, humour and over-the-top violence. Its R rating is for strong bloody violence, a scene of violent sexual conduct, language and some graphic nudity. The gore content is high but, as usual with the director, some is done for comedic effect. The film has been described as a sort of Wild West “Reservoir Dogs”, the raw and gory effort that announced his arrival in 1992.
Morricone‘s “60 Years of Music World Tour” follows a successful European arena tour that ended in Zagreb last April, and which saw the maestro perform to more than 150,000 audience members in 22 European cities. Across the continent he apparently received standing ovations and overwhelming critical acclaim.
The “60 Years” tour opened in Prague on January 15, to be followed by Budapest, Bratislava, Dublin, London, Cologne, Antwerp, Amsterdam and further cities. As with previous tours, the production features around 200 musicians and singers on stage.
Morricone said: “Performing my work live in all these different cities for people of so many different ages and cultural backgrounds is an incredibly gratifying experience.” He said he is celebrating his prolific professional career of 60 years during which he composed over 600 works.
He has added his magic touch to earlier Tarantinos “Kill Bill” (2003), “Inglourious Basterds” (2009) and “Django Unchained” (2012), as well as co-writing the Pet Shop Boys’ smash hit “It Couldn’t Happen Here” in 1973.
With four Grammys under his belt, in 2007 Morricone joined Alex North as one of the only composers to receive an honorary Oscar as presented by film legend Clint Eastwood. Later that year a tribute album “We All Love Ennio Morricone” was released and featured Andrea Bocelli, Sarah Brightman, Bruce Springsteen, Celine Dion and Metallica.