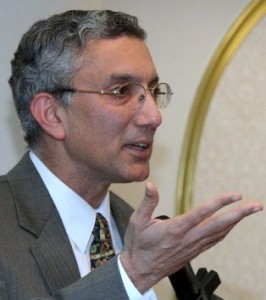 India’s Ambassador to Hungary, Rahul Chhabra, arrived in August. Prior to this post,  he served in the Ministry of External Affairs as Joint Secretary (Central Europe), New Delhi, and he has also served in the embassies in China, the United States, France, Belgium, Senegal and the Philippines.

How have you found the Hungarian experience so far?

The last few months have been memorable for many reasons. We  have received a very warm welcome from the Hungarian Government and the people. Their interest in Indian culture and appreciation of our traditions has helped considerably in my duties.

Have you had any particular high points or problems?

The one-on-one meeting I had a few weeks back with President János Áder was a great start.  We discussed all aspects of our bilateral and multilateral engagements. Referring to India’s historical traditions and cultural diversity, President  Áder  felt that they provided an unparalleled opportunity for Hungarians to get familiarised with India.

Do you need to improve the bilateral relationship?

India and Hungary enjoy a very good relationship. However, there is always scope for improvement in all activities of life. In that vein, I am aiming at taking  this excellent bilateral partnership to a higher plane. India is a big country and the Government led by Prime Minister Modi has envisaged a bigger role for India’s States in foreign policy.  Hungary and the State of Karnataka signed a Memorandum of Understanding in October 2015 to expand economic linkages. There could be more linkages with other states in various fields.

What other aspects do you want to concentrate on?

My focus will be on investment and trade relations. People-to-people contact will be the other area of focus. We are planning on organising a Festival of India, for the very first time, “Ganges-Danube” in June 2016. The Hungarian public will be able to enjoy music, dance, fashion, food, yoga and several other elements of Indian culture. People will get a taste and flavour of India. I invite Hungarians, particularly the youth, to connect with the embassy on social media platforms such as Facebook (India in Hungary) and Twitter.

What are the main business and political links between Hungary and India?

Prime Minister Orbán visited India in October 2013. There have been several other ministerial visits in both directions. Hungary has a huge locational advantage, well educated and industrious workforce, and niche technologies. India was the largest investor in Hungary  in 2014. Indian companies  have invested over USD 2 billion and already provide nearly 10,000 jobs to Hungarian nationals. They are looking at further investments in several new areas. Bollywood films are being shot in the beautiful Hungarian locales. Since Bollywood has a  huge influence on tourism, we expect to see a big boost in the number of Indians visiting Hungary.

Are you fluent in Hungarian yet?

After hearing “megszentsegtelenithetetensegeskedeseitekert”, I think I will take quite some time!