The European Union has so far failed in its management of the migration crisis because it has failed to protect the Schengen Area’s external borders, which is why the bloc is in need of a second line of defence, Prime Minister Viktor Orbán said in Prague on Monday after a Visegrád Four (V4) summit on migration.

Orbán reiterated Hungary’s stance that Europe’s migrant inflow needs to be stopped altogether. He said the line of defence between the European Union and Turkey has proven ineffective. Logic and political responsibility dictate that discussions should be held on a second line of defence, he said. What Hungary could do was provide help to those willing to set up that second line of defence south of Hungary’s borders.
The prime minister noted that security and migration would be the most important issues of 2016. He said the latest estimates indicate there are about 38.5 million internal refugees living in Europe’s surrounding regions, and they could set off for Europe at any time. “The V4 countries have so far been successful in preventing the flow of a large number of refugees into the EU from Ukraine,” Orbán opined.
The V4 prime ministers – Orbán of Hungary, Bohuslav Sobotka of the Czech Republic, Beata Szydlo of Poland and Robert Fico of Slovakia – were joined at the summit by Macedonian President Gjorge Ivanov and Bulgarian Prime Minister Boyko Borissov. Orbán said both Macedonia and Bulgaria have been successful in managing the migrant crisis, adding that Bulgaria should therefore be offered to join Schengen and Macedonia the EU.
According to a joint statement issued by the prime ministers upon the conclusion of the session – which also marked the 25th anniversary of the group – the Visegrád Four wants a strong Europe without dividing lines. Orbán, Sobotka, Szydlo and Fico warned of “the risks and negative consequences of any potentially emerging new dividing lines in Europe”. 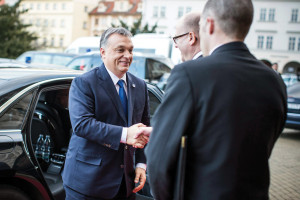 “We are determined to work actively and resolutely to prevent such new dividing lines to emerge,” the statement said. “We are convinced that all our European partners share our determination and are ready to act together with us in that spirit.”
They said the European Union must remain open to current and candidate members and European integration must be deepened. “We have unequivocally advocated for the EU enlargement as a means of expanding the area of stability and prosperity. It should be considered our moral duty, as countries which have used the opportunities opened by our own memberships, to keep the doors to the EU open for future candidates.
“Recent developments – whose common denominator is the challenging of peace, security and prosperity of EU citizens – demand a joint response from all European allies.
“We consider the deepening of the European integration crucially important. That is why we are determined to contribute to its strengthening and proper functioning. We want the European Union to be strong and a stronger European Union needs a strong Visegrád Group,” the statement said.

The country whose European solidarity should be questioned is not any of the Visegrád Four but Greece, because it made no attempt to stem the flow of migrants across its borders and protect the European Union, Hungarian Ministry of Foreign Affairs state secretary Gergely Pröhle told German regional public broadcaster Rundfunk Berlin-Brandenburg’s Inforadio on Monday. When asked why the V4 grouping of Hungary, Slovakia, Poland and the Czech Republic opposes the EU’s refugee quotas, Prohle said it is not just the V4 countries but also France that is against the relocation scheme, indicating that not even the older EU member states see eye-to-eye on the matter. He said there were historical reasons for the absence of Muslim communities in the V4 countries, meaning it would be difficult to relocate groups of people whose cultures differ significantly from that of the local population to these countries. Pröhle emphasised that the V4 countries oppose the quota system because they believe that “it is simply not a good idea”. He said the V4 had been calling for the strengthening of the EU’s borders since the beginning of the migrant crisis, noting that Hungary put forward a plan for financing the EU’s border protection as early as half a year ago. It was a “shame” that it took other countries, including Germany, “much longer” to realise the importance of protecting the EU’s borders.

Hungary has welcomed Bosnia-Herzegovina filing a formal application to join the European Union. The Ministry of Foreign Affairs said of Monday’s meeting of EU foreign ministers that Hungary is prepared to continue supporting Bosnia-Herzegovina’s EU accession process. One of the main topics of the meeting was the future of the EU’s relations with Belarus, and the ministers voted to end sanctions against 170 Belarusians including President Alexander Lukashenko as of the end of February. The EU, however, will maintain its arms embargo, the ministry said. Foreign ministry state secretary László Szabó, who headed the Hungarian delegation, said at the meeting that Belarus’ release of political prisoners last year and the country’s opening up to the EU overall contributed to the EU shifting its approach to Belarus.