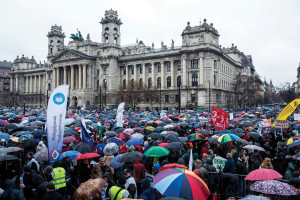 Participants in a demonstration organised by the strike committee of teachers demanded system-level changes in Hungary’s education, in front of Parliament on Saturday.

In her address to the crowd, which filled Kossuth Square, trade union PSZ leader Piroska Galló (pictured this page) accused the government of ruining the education through its reforms, which had yielded a system which is “bad for children, teachers, parents and the whole country”. Galló insisted that the education currently provided is insufficient whereas “the key to a country’s development is in the classroom”. She said the government’s “quasi-solutions” or “sugar rush measures” are unacceptable.
László Mendrey, head of PDSZ, the other large teachers’ trade union, said the direction of public education was “ill considered” and the situation of the sector was “worrying”. He told the crowd, which he estimated at tens of thousands, that teachers would go on strike unless their demands are met.
Viktória Szűcs, head of the trade union of creche employees, said that “whatever the ruling parties touch will get stolen or destroyed”. She complained about a lack of positions and demanded a 30 percent pay rise for the whole of the social services sector.
Mária Sándor, a civil activist nurse, said in her speech that nursing assistants’ wages had not been raised since 2007. “What country will turn a deaf ear to the cries of doctors, nurses, teachers or social workers?” she asked.
The speeches were often interrupted by the crowd chanting “We won’t allow them!”, “Orbán, out!” or “Traitors!”.
The strike committee earlier compiled a list of 25 demands including radical cuts in the curriculum and number of classes for children, restoration of the earlier employer and financial management rights of headmasters, lifting mandatory working hours for teachers, reducing their administrative burden and raising the schooling age to the earlier 18 years. 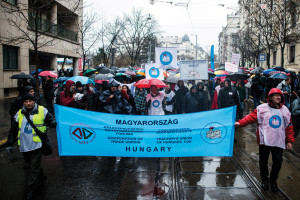 Education state secretary László Palkovics told a press conference that the demonstration was “aimless” and insisted that all issues had been raised at the recent public education roundtable or at separate talks. “It is a matter of taste whether one is ready to negotiate or stage a protest,” he said, and called for “professional talks” rather than “taking politics to the schools”.
The opposition Socialist Party expressed support for the protesters in an open letter, and said Saturday’s demonstration was “about Hungary’s future”.
Radical nationalist Jobbik also voiced support for the teachers’ demands. Jobbik’s deputy group leader and head of Parliament’s cultural committee, Dóra Dúró, attended the demonstration and told a press conference afterwards that the prime minister should “get off his high horse” and hear the voice of people that “want to see 21st-century level education, health and social sector” in Hungary. 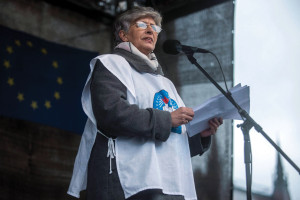 Ferenc Gyurcsány, the leader of the leftist Democratic Coalition (DK), said the demonstration could give hope to many, because the government could not “divide or bribe” participants; “for a moment those teachers were teachers for the whole nation”. Gyurcsány said all demands of the protesters were aimed at reversing changes introduced after 2010, by the Fidesz government, and suggested that his administration before that period could no longer be blamed for current problems.
Tens of thousands of teachers and 1.5 million children and parents think that education is heading in the wrong direction, he insisted. The core of the problem was not the contested central school manager KLIK. “The whole system is the problem, that the government treats nobody as equal partners,” Gyurcsány said.
It seems though that the demonstration was loud enough to raise attention within Fidesz. Lajos Kósa, the party’s parliamentary group leader,told public radio on Monday that Hungary’s public schools system is far from perfect and suggestions for improvement should get a fair hearing. “Experiences gained at the education roundtable and the compromises struck between representatives of teachers and the government should be built upon,” Kósa said, underlining the government’s message that teachers have already received what amounts to the biggest pay rise since the change of political system over 25 years ago.
A system for maintaining schools is needed, but it is “neither here nor there” what the institution in charge is called, Kósa said, referring to demands that KLIK should be scrapped. He said the previous system for maintaining schools under local council control had gone bankrupt and the central government had taken over accumulated debts of 1,300 billion forints, a large part of which were connected with schools provision.
Zsuzsanna Szelényi, a lawmaker for opposition Együtt, said the party calls for real consultations on education with the inclusion of participants who can directly take action in the interest of children. She said thousands of teachers and parents turned out at the demonstration to express concern over the future of children. “The government does not seem to understand what education should be in the 21st century, which is to achieve that children exploit their skills to a maximum,” Szelényi said. 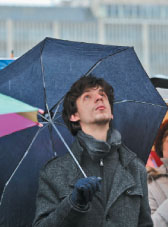 Speaking in parliament on Monday afternoon, Prime Minister Viktor Orbán said he supports talks in roundtable on public education. Orbán noted that teachers demanded an 18 percent pay rise, which he said he would “not contest”, adding however that fulfilling this demand is “at the moment impossible.”
He asked teachers to be patient and wait until the government concludes its pay rise programme in the law enforcement, health-care and public administration sectors. “Today, a primary school teacher earns 40 percent more than in 2010 and a secondary school teacher takes home 27 percent more in salary than five years ago,” said Orbán.
Dúró said in Parliament that fundamental changes “pushed through” unilaterally in education over the past five years by the government without consultations with teachers and schools had triggered the recent “scandal” in the sector. She stated concern that teachers deciding to participate at demonstrations were threatened with losing their jobs.
Bence Rétvári, state secretary at the Ministry of Human Resources, said Jobbik in 2010 had supported the concept of putting education institutions under state management. He rejected charges that teachers had been intimidated, and insisted that in Hungary everybody has the right to express their opinion at a demonstration.
István Ikotity, a lawmaker for opposition LMP, said the government was unable to realise the gravity of the education issue and sought to dismiss problems as non-existent. Rétvári responded by pointing out progress made in education such as increasing spending in the central budget on the sector and introducing a career model for teachers.

The Democratic Coalition (DK) opposition party has accused the police of paying visits to organisers and participants of Saturday’s mass demonstration of teachers the day before the event. DK spokesman Zsolt Gréczy said on Monday that the party was turning to the interior minister, demanding to know how many police were involved, how many people were targeted and what kind of questions were posed. He said such doorstep visits were redolent of Hungary in the 1950s.