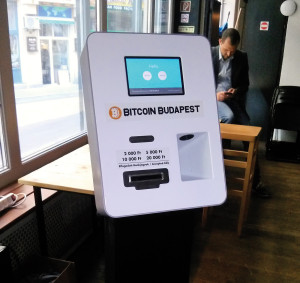 The digital currency Bitcoin is not that widespread yet, so its users are constantly looking for new fields of application, where the virtual money can be used as a means of payment. A couple of online traders – a start-up and a taxi company – accept Bitcoins but the Budapest “offline” world remains reluctant.

Since February 10 you can pay Budapest Taxi with virtual money in the capital. Although most Hungarians have probably heard nothing about Bitcoins (BTC) yet, Budapest is where the next bold step into the direction of cashless payments is under way. The first BTC cash machine in Europe went into operation in District VI’s Anker Klub in September 2014. But what exactly is a Bitcoin and what is its value?

The first mention of “Bitcoin” dates to 2008, written by someone under the pseudonym Satoshi Nakamoto in a post on a mailing list about cryptography. In 2009 the first free source Bitcoin software appeared with the first 50 units. It’s based on an even older idea of the cryptographic currency, described by Wei Dain as “b-money” in 1998, and later named as “bit gold” by the Hungarian-born Nick Szabo.
Bitcoin is made up of a payment system and the monetary unit, which is purchased or drawn using the corresponding online provider in a decentralised way through the computer network, using an own software called “Bitcoin Core”. The system is based on being part of a co-managed database, which records all transactions in a chain of blocks (in a virtual register) without using a central settlement agent – as is usual in ordinary bank traffic.
The balance of the participants is stored in personal digital “purses”. Cryptographic software helps ensure that only the Bitcoin owners make transactions and that the currency units won’t be used multiple times. This is why Bitcoins are considered a “cryptographic currency”.

The Bitcoin system therefore is not subject to physical or geographical limitations – except for needing an internet connection – and therefore it can be used freely across countries. The market value of Bitcoins is formulated based on supply and demand.  Compared to the market of foreign currencies, the exchange rate is subject to strong fluctuations for this reason.
Initially Bitcoins did not have a value expressed in other currencies; the first exchange rates were negotiated by people on Bitcoin forums in 2010. In 2011 you could buy one BTC for under USD 10. In April 2013 the exchange rate already hit USD 266, however it fell to under USD 50, so by 80% within one week.
In November 2013 the exchange rate even exceeded USD 1100, however there was a subsequent strong decline following the bankruptcy of the Bitcoin handling software “Mt. Gox” in February 2014. Since then the range lies between USD 180 and 300. In the beginning of 2016 one BTC was traded for almost USD 450.
In the case of transferring money, fees apply. At the moment the minimum fee is 0.00001 BTC. The reasons for a fee are to reward participants for handling the transactions, and to prevent the network from being intentionally overloaded with transactions. The higher the transferring participant sets the fee, the faster the transaction is carried out.
The strong fluctuation in exchange rates, which is partly caused by users signed in under pseudonyms and partly by traces of criminal activities in the so-called Darknet, are not exactly waking the confidence of ordinary users. Still, the number of virtual coins is growing: according to the professional portal statista.com there was around BTC 14.8 million in traffic at the end of October 2015.
In Hungary the number is growing as well; according to estimates the Hungarians should have around EUR 25 million in their virtual purses. In consequence it’s logical that Hungarian restaurants, sightseeing providers, dentists and taxi companies are starting to be interested in this Bitcoin asset.

“We were the first ones” 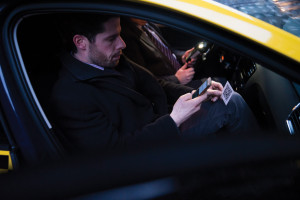 Budapest Taxi is one of the first public service providing companies in the country experimenting with Bitcoins. According to the German professional portal coinwelt.de, all the drivers in the company are going to accept the new currency as a payment method soon – thanks to a co-operation with the Hungarian BTC payment service provider “TheCoinPAY”.
At the beginning, 580 Budapest taxis will be accepting Bitcoins. Although general manager Csaba Horváth is not expecting an immediate increase in the number of passengers, he was still very positive in an interview with euronews: “We should be taking every opportunity to keep pace with innovations. And then when the breakthrough comes, we can say that we were the first ones.”
András Lőwy, the vice-president of CoinPay Zrt., explained: “Our company would like Bitcoin owners to be able to spend their money in conventional shops for products and services as well. This could mean a growth opportunity for these companies and at the same time meeting a need for more comfort.”
Thanks to the system of CoinPay the driver gives the passenger a QR code for the smartphone and gets a receipt from the mobile payment – in forints. The start-up company makes sure that the driver receives the sum in forints afterwards.
Although some people only see the negative features of Bitcoin, about which they were warned, others see the new currency as a real innovation. The cash machines and the Budapest taxis will prove with time whether it will be a real success.