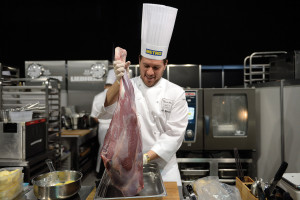 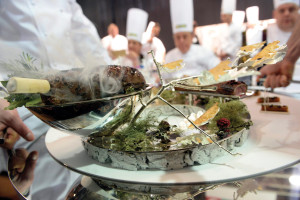 Chef Tamás Széll from Budapest’s Onyx restaurant has won the Hungarian round of the world chef championship Bocuse d’OR and will represent the country at the European finals on May 10-11, also in Budapest. Chefs from six restaurants – Olimpia, Kollázs, Costes Downtown, Sodexo, 67 Restaurant and Bistro, and Onyx – have been in competition for the European finals. The professional jury included six Hungarian and six international experts.

A black-and-white photo of a baby being passed under Hungary’s razor-wire fence by migrants on the border with Serbia has won the World Press Photo of the Year prize for 2015. Australian freelance photographer Warren Richardson captured the scene on August 28 last year near Röszke. Francis Kohn, chair of the general jury, said the photo was “powerful because of its simplicity”. 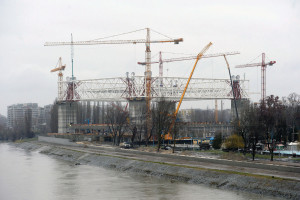 General contractor Market Zrt. has topped out – reached the top of the structure – the Dagaly Aquatic Centre, the main venue for the 2017 FINA World Aquatics Championships, six weeks ahead of schedule, government commissioner for priority investments in the capital Balázs Fürjes has said. The championships were originally planned for Guadalajara, Mexico, but it pulled out a year ago for financial reasons. FINA picked Hungary to host the event shortly afterward, leaving just two years to prepare. Fürjes said this is about half the usual time. “We’re running the marathon as a sprint because we have no other choice,” he said. About 5000 people are working on the construction.

Striking public transport unions in Miskolc are concerned that the employer might use “all means” to break the action. “We have unconfirmed information that the employer could even use strikebreakers,” trade union federation MSZSZ leader László Kordas said. The strike is to demand a long overdue pay rise and benefit payments, and to protest against discrimination and seek a “civilised and regular dialogue”. Local chapters of the opposition parties have blamed city management. The Socialists said residents should not blame the strikers fighting for their rights but instead leaders of the city and the public transport company who “believe they can just do anything to Miskolc’s workers”. Radical nationalist Jobbik said that ruling Fidesz has “left but two alternatives for employees – they can either accept that they had been shortchanged or they go on strike”. Jobbik accused the city leadership of intimidating striking drivers.

Several baths will offer a 50 percent discount on the entry fee and other services on February 29 to celebrate the leap year. The Hungarian Spa Association said: “It only happens every fourth year that we get one extra day to live our lives and be happy. Why should we not celebrate this day with a rejuvenating bath for both body and soul?” 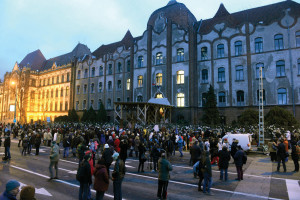 The government has no means to increase teachers’ wages by 15-20 percent at present, Minister in Charge of the Prime Minister’s Office János Lázár has said. There is no way to do so even if protesters “use children … to blackmail the government,” Lázár told a weekly government press briefing. He warned trade unions against such “demeaning action” and he called on unions to attend official talks with the government, which is “open” to negotiations. Lázár said access to free textbooks would remain in place but there would be no concessions made to the “textbook lobby” even “if it hides behind teachers”. The government would assess the outcome of talks between the Ministry of Human Resources and teachers’ organisations on February 24 – after this edition of The Budapest Times went to press. Lázár said schools operator KLIK is “not a perfect organisation” but the state’s right to maintain schools is beyond dispute. A day later a protest was staged outside Budapest’s Teleki Blanka Grammar School (pictured) to express solidarity with its headmaster and teachers, who had come under scrutiny by KLIK after they joined a nationwide teachers’ protest. Enikő Kálovics, spokesperson for the Independent Student Parliament and organiser of the demonstration, said the goal was to ensure that “students and teachers have a shared future in Hungary”. She encouraged parents to refuse to send their children to school on February 29. The participants chanted “Not afraid!” and many put flowers on the school fence. Some held up chequered shirts, an outfit associated with teachers protesting against the government’s public education changes. 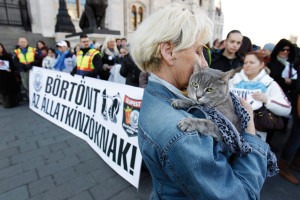 Thousands of people demonstrated outside Parliament against animal cruelty in Budapest on Saturday. The protest was called by more than 120 animal welfare organisations. After speeches, a proposal to introduce heavier penalties was handed to a representative of Parliament’s agricultural committee. Kinga Schneider of Noah’s Ark Animal Shelter Foundation said the civil groups also wanted to see animal cruelty classified as a crime rather than an offence. 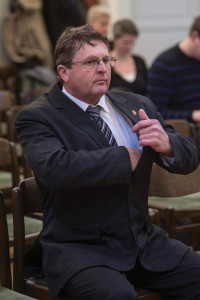 The court of Kecskemét has fined József Balogh, the mayor of Fülöpháza, HUF 420,000 for aggravated assault of his life partner. The non-binding ruling was appealed by the prosecution, which wanted jail time and for Balogh to attend anger-management classes. About three years ago Balogh severely assaulted his partner after attending her son’s wedding.  Initially he asserted that she fell when she tripped over the family dog. Balogh – who retained his mayorship throughout the proceedings – subsequently confessed to the assault but blamed it on being under the influence of alcohol and medication.