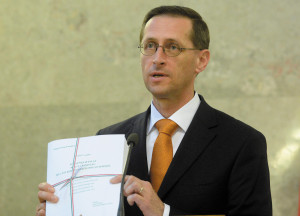 Tax cuts, the government’s home-building scheme and growth will be the centrepieces of next year’s budget, Minister of National Economy Mihály Varga told Parliament on Tuesday. He said the budget would ensure that every Hungarian can take steps forward, but opposition parties do not see such a bright future.

Varga said the government targets economic growth next year of 3.1 percent together with a budget deficit of 2.4 percent of GDP. The public debt will continue to decline, he added.
The draft budget contains a combined HUF 170 billion of reserves in the National Protection Fund and for “extraordinary government measures”. Additionally, ministries will be required to freeze 1 percent of their budgets as “stability” reserves, adding up to HUF 35 billion. The reserves may only be freed up after October, if fiscal targets are met, Varga said.
Every area of the budget will have higher funding compared to this year, the minister said. Extra funds in the education budget would amount to HUF 270 billion, health-care would receive an added HUF 167 billion while social security and welfare spending would have HUF 155 billion more. Extra spending on culture would amount to HUF 66 billion.
The budget allocates HUF 211 billion for home purchase subsidies.
Further, HUF 114 billion extra will be allocated for law enforcement, HUF 5 billion for local councils, HUF 26 billion for judicial matters, HUF 10 billion for foreign affairs and HUF 51 billion for defence.
The real value of pensions will be preserved as increases will be essentially pegged to inflation, Varga said. If retail prices rose at a slower pace than the government’s projection, then the real value of pensions would rise. If it was the case, however, that inflation rose at a higher pace than projected, then pensioners would be compensated.
Varga said the reduction of VAT on basic foodstuffs also meant a rise in the real value of pensions. VAT on milk, eggs and poultry will fall to 5 percent from January 1, he noted. Further, VAT on restaurant and internet services would drop to 18 percent.
Personal income tax will remain at 15 percent, one of the lowest rates in Europe, he said.
The state operational budget would be balanced. The other two pillars of the budget contained European Union and domestic development funds, and based on European accounting rules these parts of the budget would be in deficit.

The budget shows the symptoms of a dried-up economy: Dániel Kárpát

The radical nationalist Jobbik party said the budget showed the symptoms of “a dried-up economy”. Party spokesman Dániel Kárpát said the problems of “the previous eight years” should have been corrected over the past six years. Instead, economic policies still depended on foreign capital and multinational companies that failed to serve Hungary’s long-term interests.
Kárpát said infrastructure developments were sorely needed as well as more spending on health care, education and job creation. He said the government’s home-building subsidies were only good for helping a privileged few, while Jobbik would introduce a state-funded home-leasing programme instead. Jobbik would also lower VAT on basic food, consumption and child-care products to 5 percent or less.
Erzsébet Schmuck, deputy group leader of Politics Can Be Different (LMP), said the government’s budget draft seeks to serve the interests of the ruling Fidesz party’s “oligarchs”. Noting the government’s recent pledges to balance the chapter of the budget that excludes EU and domestic development funding in 2017, she said “everything is in place for the government to steal as much EU funds as possible”.
Schmuck criticised Fidesz’s economic policy, which she said was not helping to eliminate poverty among workers and was hurting Hungary’s competitiveness. She added that whereas the government had pledged to spend a total HUF 100 billion on health-care next year, more than two-thirds of that amount will need to go towards settling hospital debt rather than being spent on wage rises in the sector.
Schmuck repeated LMP’s criticism of “wasteful” projects such as the construction of sports facilities, the Paks nuclear upgrade and the prime minister’s office relocation to the Buda Castle. She called spending by the National Bank and its foundations “outrageous” and said the central bank should pay its profits into the central budget.
The Együtt party called next year’s budget bill “self-centred” and “short-sighted”. Zsuzsanna Szelényi said no other state in the region spends as much on itself as Fidesz, operating “its apparatus, political propaganda and bureaucracy”. At the same time there is no debt reduction, no new investments or real jobs, she insisted.
The Democratic Coalition (DK) said figures in the budget bill show that the country’s real interests are unimportant as far as the “Orbán regime” is concerned. After having “ruined doctors, nurses and patients” over the past six years, the government has only become alert to the needs of the health-care sector belatedly, the managing deputy leader of the party, Csaba Molnár, said.
The extra allocation for health-care will not be enough for facility developments, wage increases or the reduction of waiting lists, and will only cover servicing mounting hospital debts, Molnár said, adding that the sector would need about an additional HUF 500-600 billion in central funding.
He said DK would boycott the bill’s parliamentary debate and refuse to submit amendments since it regards the government’s economic and social policies to be wrongheaded.