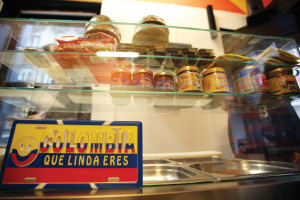 Hungary can’t compete with the level of coffee culture in Colombia, which is one of the world’s most important coffee-producing countries. Even if Budapest has grandiose cafés where you can sip your coffee from expensive porcelain cups, you won’t be able to buy real quality Colombian coffee in any of them. At least this is what Jorge Andrés Suarez thinks, and he has opened his own small Café Macondo to give a taste of real coffee. 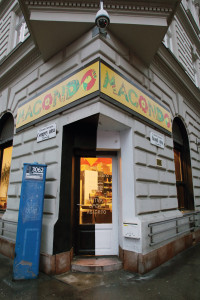 If the name Macondo sounds familiar, the reason might be Colombian writer Gabriel García Márquez. His novel “One Hundred Years of Solitude”, which earned him the Nobel Prize for Literature in 1982, features the imaginary village Macondo, from its foundation to its demise. Márquez, who died less than two years ago, is respected in his home country as its most important representative of literature, so it’s not surprising that Suarez has honoured his compatriot by christening his café Macondo.
In the interior can be found a Buendia family tree. Their history can be followed in “One Hundred Years of Solitude”, a somewhat used edition of which decorates the café bar. It was brought to Budapest by Suarez years ago from Columbia,

Coffee is not coffee at first 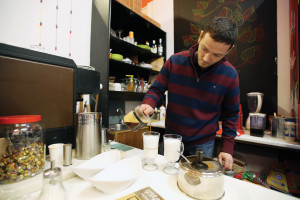 The tiny café at the corner of Szondi utca and Csengery utca, just a few minutes walking distance from Nyugati Railway Station, does not seem very special at first sight. Although the ceiling, which is painted in the Colombian national colours of yellow, blue and red, brings some colour into the room, it cannot distract your attention from the sad state of the rather meagre furniture.
However, as you will quickly learn here, in Macondo the intention is not to impress with an expensive interior design: “We are not one of those cafés where you go in order to be seen,” says Sanchez. “If you go to Starbucks, you are declaring that you know nothing about coffee.”
He drinks up to 12 cups of coffee each day and apparently has an extremely refined sense of taste. “Hungarians are having a problem with roasting; they are almost burning the coffee, which in turn gets an unpleasant bitter aftertaste,” he believes.
For this reason he selected a small artisan roasting workshop in Csömör, just east of the capital, which was already working with the Colombian coffee bean called Antioquia, to roast coffee for him according to his special instructions. Sanchez visited the Beanlight roasting workshop personally to hand over his instructions. He plans to sell small portions of his own roast for takeaway. 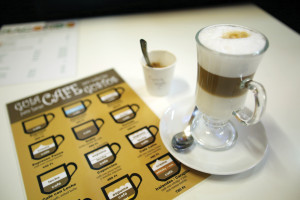 Besides the roasting, you have to keep in mind a number of tricks in the coffee brewing process as well. Many people are scalding the coffee with too hot water, which is unnecessary. As a real Colombian coffee connoisseur, Suarez does not make these kinds of mistake.
The final result: coffee in Café Macondo really tastes smoother than we are usually used to. Surprisingly, perhaps, you are even able to taste the lightly sour citrus note, promised by the roast blend. And coffee in Macondo comes in all sorts of possible variations from espresso to café con leche to melange. 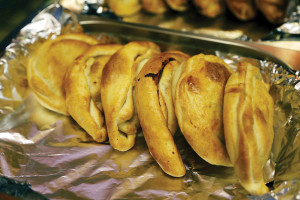 For sweetening the coffee they don’t used refined sugar but a sticky thick paste called Panela. It’s made out of raw sugar juice cooked up so thick that it can be pressed into different shapes and packaged for sale. Its taste reminds us more of caramel.
Instead of having a bite of cookie with your coffee, this café offers a “Bocadillo Veleño”, a rectangular candy made out of guava jelly. The fruity sweetness almost makes you dizzy. Therefore, as Suarez explains, Colombians prefer to eat it with cheese. However, for the Hungarian taste this might sound like something that needs a little bit of getting used to.
You can buy further exotic products at Café Macondo, for example the Colombian national lemonade called “Colombiana” – a soft drink with a taste similar to the Hungarian Traubisoda – as well as lemonade made of tamarind or passionfruit.
Furthermore they sell coffee candy, chips made of dried cooking bananas, canned figs and Chontaduro (a very starchy palm fruit) or milkshake made of Guanábana – a prickly green fruit that is called “sour bag” in Germany.
Besides the durable products the café offers different fresh snacks each day such as Empanadas (dumplings with meat or vegetable filling), Arepas con queso (round corn pies with cheese) and Natilla (a sort of Colombian pudding). And an offer for those people with a really-really sweet tooth: figs filled with cream.
Suarez likes to chat about his products and his home country, so you can also learn a lot of things about Colombia. 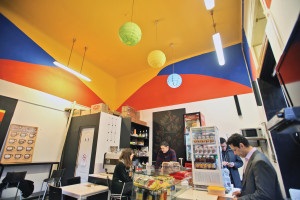