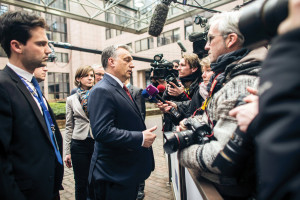 The leaders of the European Union have “finally come round” to the point of view that the Hungarian government has always maintained, namely that the bloc’s external borders must be sealed and the Schengen agreement upheld, Gergely Gulyás, deputy group leader of the ruling Fidesz party, told a news conference on Tuesday.

Assessing the outcome of the previous day’s EU-Turkey summit, Gulyás said, “It is in all our interest to have good co-operation with the Turks … at the same time it is not in our interest to have a bad agreement with Turkey.” He added that Prime Minister Viktor Orbán had argued at the summit that “in this form the deal with Turkey cannot be signed”.
In the early hours of Tuesday Orbán told reporters that leaders of the European Union have agreed to close off people-smuggling routes in the Western Balkans, which means “restoring order on the borders”. The agreement was adopted as a result of joint efforts by Hungary, Austria, Slovenia and Croatia, Orbán said.
He added that the accord will help eliminate a “people-smuggling business model” and conclude an era. “Even if smugglers make a deal with migrants they will not be able to deliver because we will not allow migrants to cross the Balkans,” Orbán insisted. He went on to say that it will result in a “difficult situation” for Greece because many migrants will be stuck there. The EU has agreed to help Greece manage that increased burden, he added.
At the summit, no agreement was reached with representatives of Turkey, who presented a proposal concerning four “very difficult” issues, Orbán said. Those topics were deemed too complex to pass decision in such a short time, and would be subject to further talks between the EU and Turkey.
Orbán also voiced Hungary’s position against possible transfers of migrants from Turkey to Europe, and noted that Hungary and Slovakia have filed a suit against the 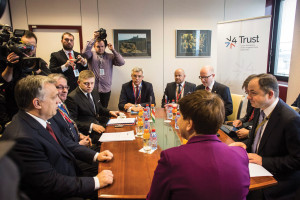 The meeting of the V4 before the summit

EU over an earlier European decision concerning the relocation of migrants. Hungary disagrees with “any accepted methodology” of the EU’s mandatory quota system, and has supported a Polish proposal aimed at eliminating the possibility of any increase in those quota figures under an agreement with Turkey, he said.
Gulyás noted that the government’s referendum initiative on the migrant quota issue opened the possibility for Hungarian voters to decide whether they want to live with the phenomenon of migration or to reject this. The Fidesz deputy chairman also accused the left wing in Hungary of failing to adopt a clear position, adding that they supported neither the border fence nor military and police defence of the border.
In response to a question regarding Orbán’s so-called veto at the Brussels EU-Turkey summit, Gulyás said the report had been correct to the extent that “the Hungarian prime minister was the first to signal that the form in which the agreement with Turkey stood throughout talks during the night could not be signed”.
The opposition LMP party said the European Union’s incapacity to tackle the migrant crisis was further deepened by Orbán’s refusal at the summit to put forward proposals. Instead, he simply stated what he would not support. József Gál, the party’s spokesman, said the outcome of the summit allowed even more space for “outside blackmail” and the idea that it is best to “take action alone than do nothing together”. He noted that LMP had put forward a package of 24 proposals in the summer of 2015 that called for a common EU-level solution to the migrant crisis.

Prime Minister Viktor Orbán voted in support of mandatory migrant quotas for the second time during the extraordinary summit of European Union and Turkey leaders on Monday, the opposition Democratic Coalition (DK) said. According to a statement approved unanimously at the meeting the distribution of migrants must be significantly speeded up to reduce the burden on Greece, DK lawmaker Zsolt Gréczy said. This clearly applies to the mandatory use of a quota system and “Viktor Orbán must have approved it considering that a unanimous decision was made”, he added. Orbán “lied to ten million Hungarians” when he said that the summit was interrupted because of his veto, Gréczy said. It was not true either that it was decided migrant routes across the Balkans should be closed. According to the agreement, human smuggling must be stopped and migrants will be transported in an organised way to the EU, he argued.

The government has declared a nationwide migration crisis, the Minister of the Interior Sándor Pintér announced on Wednesday. Pintér noted that Slovenia, Croatia and Serbia had introduced special measures at the borders from midnight. He said these countries were only accepting migrants according to Schengen rules for the external border, namely that only people with valid passports and visas can enter. Pintér said it was not known what kind of reaction could be expected from refugees or illegal migrants who are already in these countries, explaining Hungary’s decision to send border reinforcements and the government’s declaration of a crisis. Pintér said that in Slovenia, Croatia and Serbia around 10,000 people were without a permit, and “it is not yet known in which direction they will set off”. He noted that “significantly increased (migrant) movements” have been reported at Hungary’s fenced-off southern borders and the authorities are monitoring developments. Transit areas and asylum-seeker checkpoints are full and “turbulent” situations are anticipated, he added. Answering a question about actual measures, the minister said the government would multiply the number of police and soldiers in the area and make preparations to increase “reaction capacities”. As for the military, some 1500 troops would participate in the operations.