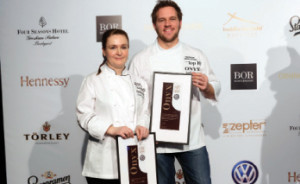 The prizes awarded by Volkswagen-Dining Guide each year are the equivalent for Hungarian restaurateurs of the Oscars for the US film industry. This year’s “Restaurant of the year” title went to Onyx, which already boasts a Michelin Star. The categories “Chef of the Year”, “Most innovative kitchen” and “Most promising  new opening” were also recognised at the recent gala evening.

There was a lot of hustle and bustle at Larus Étterem, this year’s venue for the award ceremony. Everyone who is everyone in Hungarian gastronomy was there to celebrate the best of the best. There were also some celebrities from politics, business life and culture, such as star stylist Márk Lakatos, the wife and one daughter of Prime Minister Viktor Orbán and the deputy mayor of Budapest, Alexandra Szalay-Bobrovniczky.
However, the real stars of the evening were the Onyx team. The restaurant, a neighbour of the famous Gerbeaud cake shop on Vörösmarty tér, won the title of “Restaurant of the year”. What’s more, its chef, Tamás Széll (pictured), who was selected among the Hungarian finalists of the international cooking competition Bocuse d’Or only last month, won the “Chef of the Year” award.
Costes, which also has a Michelin Star, has every right to feel piqued. It missed out on being named best restaurant by a whisker, tying with Onyx on 92 points out of the possible 100. Finally everything was decided based on the opinion of Italian chef Nicola Portinari, who was invited as an expert and gave the decisive vote to Onyx. Portinari is a two-star chef, an honour not yet attained by any chef in Hungary.
Besides these two awards, there were further prizes offered by gastronomic companies: Borkonyha received the prize for the “Most innovative kitchen”, offered by kitchen utensil manufacturer Zepter; sparkling wine maker Törley selected chef Gábor Fehér, the owner of the recently opened Esca studio restaurant, as the “New talent of the year”; and the Hennessy company gave another chef award to Costes’ Eszter Palágyi.
Émile, a restaurant that opened only last year and is connected to the operator of Onyx, earned the Bortársaság prize for “Most promising new opening”. Balkan grill PolaPola, a master of grilled meat specialties, was awarded within the Streetfood Category by beer brewer Staropramen.
Finally, the gastro-newspaper Magyar Konyha gave awards for the three best Hungarian food producers: Tamás Sándor (cheese), Erzsébet Balogh Nagy (goat farming) and György Szabó (herbs). These prizes were presented by Prime Minister Viktor Orbán’s wife, Anikó Lévai.
After the award ceremony, which was conducted with racing speed – maybe the organisers could perform this with a little more dignity and a slightly lower level of noise from the audience next year? – it was time to experience the culinary talents in action: besides Larus Étterem, six further fine-dining restaurants provided the catering for the evening. Costes, Borkonyha, Émile, Esca, Kollázs – Brasserie & Bar and Onyx each presented their specialties.
The offer of sophisticated degustation plates extended from classics such as duck breast, goose liver or beef filet up to unusual dessert creations such as wasabi-vanilla ice-cream (really worth trying!) and even snacks that might take a little bit of getting used to made of rooster testicles, blood and apples.
Since everyone has a very different concept about what an unforgettable meal should contain, it’s important to keep restaurant visitors up to date with the selection. The Volkswagen Dining Guide TOP 100 restaurant guide, which was also presented at the gala, can be a great help: besides the ranking of the best Hungarian eateries, the 300-page book contains a large selection of additional restaurant and streetfood recommendations.
Each listing has the restaurant address and a short description both in Hungarian and English, summarising the impressions about the local atmosphere, price level and kitchen.