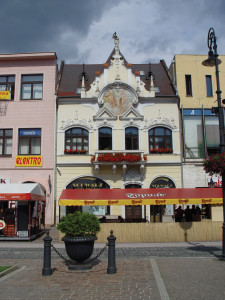 Kosice sits at the foot of light hilly terrain to the north and with fine vineyard culture towards the southern lowlands, in eastern Slovakia. It is just 25 kilometres from the Hungarian border and thus reasonably near Miskolc, and 400 kilometres from Bratislava, with the fabulous Tatra mountains and grandiose River Danube in between. Slovakia’s second city is gracious and very much worth a visit, because the rewards are there. 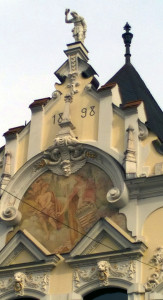 Once part of Hungary pre-Trianon 1920, Kosice is known to Hungarians by its former name of Kassa.  It was made European Capital of Culture in 2013 and this year it is one of several European Cities of Sport. A pleasant 15-minute walk brings us to the town centre from the newly renovated train station, passing en route through Mestsky Park and by the striking pseudo-gothic Jakab Palace with its distinctive array of towers.
From this prominent landmark on the edge of the old town, continue straight through Mlynksa Street as it becomes easy to notice the dark but most alluring 14th-century Gothic Saint Elisabeth’s Cathedral, the symbol of Kosice, with its fine, mesmerising black dome with gold lining upon it.
Also within this immediate area are the prestigious Janko Borodác Theatre, the Urban Bell Tower and the cheerful, illuminating Musical Fountain. Here one can sit and listen to various popular classics recreated in philharmonic chimes, and capture the spiritual atmosphere of the town while resting by the well-tended landscaped garden, with local Kosicanias and tourists alike.
From this immediate central point it is a real pleasure to continue walking alongside the tram lines and the narrow flowing stream feature, and observe the attractive and varied Gothic, Renaissance, Baroque, Secession, Functionalism, classical and modern architecture along the beautifully restored, kilometre-long Hlavna Street.This is the main street and it has a pleasing array of boutiques, book shops, galleries, discreet little backstreets and other cultural delights before arriving at one of the many fine restaurants offering fine traditional Slovakian fare. This includes potato dumplings with sheep cheese, sauerkraut soup with mushrooms and sausages, and roasted duck with potato flat cake.
All these dishes await at the Med Malina restaurant or Karczma Mlyn pub, alongside other eateries serving all kinds of world cuisine. Also take note of the Hungarian restaurants such as the carda/csárda and the various cukrászda/tea shops that are also found along the way. Remember, Slovakia is in the eurozone.
Although I don’t speak Slovakian, communications were fine. Many people in the hospitality trade speak English and other neighbouring languages. The friendly and resourceful “MiC Kosice.sk Informacne Centrum”, opposite the front entrance of Saint Elisabeth’s Cathedral, provides all relevant information about hotels, museums, cultural programmes and other events, both in their office and online. See http://www.mickosice.sk/
For those who would like to get acquainted with wooden church culture, as mostly seen in the nearby hills and valleys; I highly recommend an exquisite feature next to the Eastern Slovakian Museum on Hviezdoslavova Street, a 10-minute walk northwards from the central cathedral. Further information about these wondrous constructions can be found in selected guides and atlases at nearby bookshops.
Kosice, less crowded than Slovakia’s capital, makes an excellent choice for a long weekend away with good main-line connections to Bratislava, Budapest, Krakow and Prague. Kosice international airport is also close by. 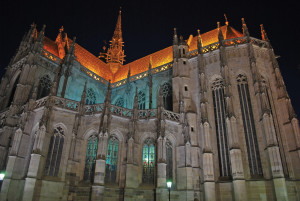 The Golden Beggar refers to a local fairytale about someone who made a fortune begging on the streets of Kosice, and before long was clever and rich enough to buy a house on the grandiose Hlavna main street. One can see the Beggar’s House, an elegant art-nouveau building with the famed beggar perched on top and bowing to passersby.
The international Golden Beggar Festival of Local Televisions takes place annually in Košice, this year from June 15-19. For further information see www.festival. sk
In 2015 Kosice hosted an international film festival and there will be another this year. For those who wish to tune into local media, there is Nasa TV with a lively mix of news, current affairs, entertainment and so on.

For an out-of-town excursion close by, may I recommend hiring a bicycle and visiting the Hradova Observation Tower? This five-kilometre trek takes you north of the city into the hills before turning off into a forest. Then 99 steps await before exceptional panoramic views of Kosice and the surrounding area. On a clear day it is possible to see into Hungary. West of the city is a Children’s Railway close by in Cermel and a lake at Bukovec. All are easy to reach and host spectacular nature and greenery.

There is one train a day from Budapest, a comfortable early morning service that leaves Keleti at 6.30am and arrives at 10am. The return service departs at 6.02pm and arrives in Budapest at 9.30. It costs HUF 6300 plus seat reservation requirements.
Or take the M3 motorway towards Miskolc then the E71 main northbound road that crosses the border. It is a straightforward three-hour, 250-kilometre drive.
Despite the Schengen open border I strongly advise bringing a passport or identification because of the current refugee crisis. 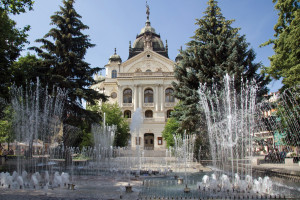 The theatre with
the Musical Fountain

I also recommend visiting the wondrous Zemplinska Sirava, a lake known as the Slovak Sea and similar to Lake Balaton with its high-summer atmosphere but much smaller. This little gem is 70 kilometres eastwards on the busy E50 main road. Once there, it is possible to cycle the 40 kilometres circumference, pursue bird watching and observe the spectacular peaks of the Vihorlatske hills and valleys close by.
Local information about this wonder is a bit thin but I easily found very good hospitality, without prior reservations, when I cycled around the lake and immediate area some years ago. I shall return.
And for those who really wish for adventure, I strongly suggest visiting Uzhgorod/Ungvár in Ukraine, Kosice’s twin town 100 kilometres east, continuing on from the lake. For foot passengers I suggest either taking a direct bus from Kosice or Michalovce, the capital of the lake, before crossing the frontier.
For further information, please refer to my Uzhgorod article “Another life, just over the border” on The Budapest Times website.
For those who wish for a taste of wonderful Ukraine hospitality and food beforehand, there is an excellent Ukrainian restaurant in Kosice called the Barvinok on Alzbetina Street, very near the MiC tourist bureau; as well as an English pub close by. I promise you something very special.