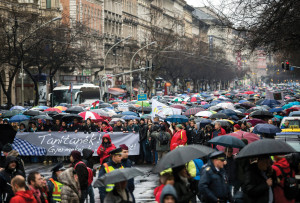 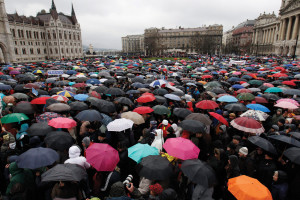 A one-hour teachers’ strike may be held this month unless the government apologises to the profession and sends a delegation to talks capable of negotiating, István Pukli, a headmaster who has become the symbolic leader of the teacher protest movement, told tens of thousands of demonstrators in Kossuth tér on Tuesday. He set a deadline of March 23 for the conditions to be met. Pukli insisted that 75 percent of Hungarians supported the demonstration and 67 percent of ruling Fidesz party voters did. He listed 950 institutions, 70 organisations and 35,000 private individuals as backing the protest alongside an estimated 50,000-80,000 who attended the demonstration. Another protest organiser said the teachers had 12 demands, among them setting Hungary’s education financing on the same level as the European norm, reducing burdens on both students and teachers, and delaying planned changes to school-leaving exams. Katalin Törley, one of the demonstration’s organisers, said teachers had indicated since 2011 that the education law brought in by the government was not working and the state-run body responsible for running schools (KLIK) had failed. Teachers, students and parents are suffering, she insisted.

Owner to sue over “Golgotha” 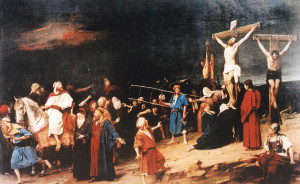 Hungarian-American Imre Pákh will sue over the listing of a painting he owns that is on loan to the Déri Museum in Debrecen. The art collector said that as long as the painting is listed under national protection it will remain out of view of the public in Debrecen. Pákh, speaking from New York, added that he has a permit from Hungary’s authority for the protection of national heritage to remove the painting from the museum, but he has no plans to do so. The authority recently declared “Golgotha”, a monumental painting by the Hungarian master Mihály Munkácsy, as a listed work of art, preventing its removal from the country without a permit and giving the state pre-emption rights for its purchase. The declaration, which may not be appealed, was issued after Pákh contested the first declaration listing “Golgotha” last year.

Sales of Easter sweets are expected to climb this year after falling in 2015, the secretary of the Hungarian Sweets Makers Association has predicted. Last year sales of seasonal sweets came to HUF 4 billion around Easter, down 2 percent on 2014, said Anna Benke, citing data from market researcher Nielsen.

Hungary’s 250 temporary or permanent Georgian residents are welcoming the news that the European Commission (EC) has proposed to the European Parliament and European Union Council the lifting of visa requirements for Georgian citizens. Last year 9963 Georgians entered Hungary with visas for Hungary or the EU. A percentage of those who came by air would have been using Wizz Air’s direct flight from Georgia’s second city, Kutaisi, to Budapest. Georgia has welcomed the EC’s move this month to allow short-term visa waiver for Georgians in the Schengen area, saying it is recognition of the reforms made by its government. Georgia has met all the EC benchmarks set for the Visa Liberalisation Action Plan: document security; border management, migration management and asylum; public order and security; and fundamental human rights. Successful completion of the EU procedures, expected soon, would allow Georgians holding biometric passports to enter the EU/Schengen area visa-free for stays up to 90 days in any 180-day period. The Georgian government says this is clear proof that its reforms are bringing concrete benefits to all its citizens. 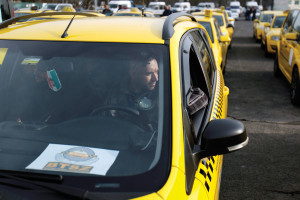 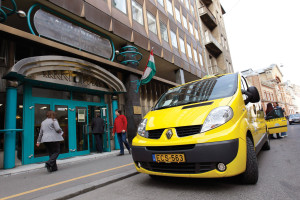 A group of taxi drivers relaunched protests against car dispatcher Uber in central Budapest last week by partly blocking traffic at Deak tér. They blocked a parking lane, a bus lane and a bicycle lane with 18 cars to demand stricter enforcement of the passenger transport sector rules that were changed this year to create fairer market conditions for taxis. State news agency MTI’s on-site correspondent said the demonstration did not significantly slow traffic. Róbert Horacsek, a spokesman for the organisers, said the demonstration began with drivers gathering at Heroes’ Square, then heading to the headquarters of Budapest Transport Centre, the National Transport Authority and the Development Ministry, submitting petitions at each. A group of drivers also stopped at the US Embassy but did not submit a petition, contrary to earlier plans. The taxi drivers had been granted permission to protest for longer but ended the demonstration before the deadline. 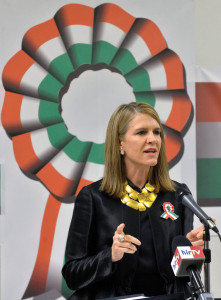 United States Ambassador Colleen Bell has emphasised the responsibility of journalists to counterbalance ignorance, hate and fear, at an event marking the Day of Hungarian Press. Addressing an annual awards ceremony at the headquarters of the Association of Hungarian Journalists (MUOSZ) in Budapest, where six eminent journalists were honoured, Bell said that whenever only one side of a story is told, a free press seizes the opportunity to tell the other side. “Journalists, especially good journalists like those you honour today, not only expose them but also bring attention to the dangers of intolerance, and report with moral and ethical responsibility,” she said. “Even in countries like Hungary, where some hate speech is criminalised, there is a fundamental responsibility to rely not only on the government or the courts to address the problem, but for the press to publicly expose the intellectual and moral bankruptcy of those who would peddle racism, xenophobia and anti-Semitism.” Referring to the First Amendment of the US Constitution, she said it forbade Congress from passing laws that restrict freedom of speech or freedom of the press. The public good cannot be good if it does not support equal rights, Bell said. Freedom of expression was not an absolute right but one rooted in the principle that the right of an individual to express their opinion is permitted insofar as doing does not impinge on the rights of others. The work was not yet over; every Hungarian deserved freedom of speech, and this was the road to be taken rather than a final destination since it was impossible to totally eradicate hatred and fear from society. The struggle must continue and be passed to the next generation.