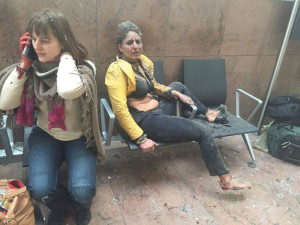 In the wake of the blasts in Brussels on Tuesday, Prime Minister Viktor Orbán has ordered a heightened terrorism alert in Hungary at the second highest level, Minister of the Interior Sándor Pintér said that day.

All forms of terrorism must be rejected and fought against, Orbán told a news conference, where he confirmed that two Hungarians had been hurt in the explosions, neither seriously though both have been hospitalised. On Tuesday afternoon Minister of Foreign Affairs Péter Szijjártó said the two had undergone surgery, in one case because of internal injuries.
“These are precautionary measures,” Orbán said regarding the heightened terror alert, adding that once communication has been restored with Brussels and all reliable information is available, a decision will be made on maintaining this level of alert.
Pintér said measures include dispatching patrolling officers and armoured vehicles to Liszt Ferenc International Airport. Hungary’s TEK counter-terrorism force would patrol the square in front of Parliament and Metro stations.
He said the second-level alert will remain in effect until further details are available to clarify the circumstances in Brussels, and until information is obtained about what can be expected in other European countries.
The national police said a control and transit point is being set up on the road to Liszt Ferenc Airport. Additional police units would be dispatched to patrol public spaces outside the airport and the passenger lounge, where explosives experts would also carry out checks aided by sniffer dogs.
All flights between Brussels and Budapest have been cancelled. The flights affected are inbound and outbound Brussels Airlines services from Zaventem airport, which was the scene of terrorist explosions on Tuesday, killing about 14 people. Wizzair flights serviced from Charleroi airport are scheduled to operate as normal. 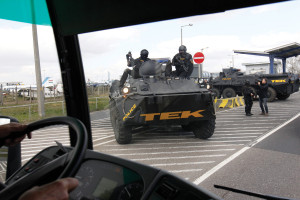 TEK said it is stepping up its intelligence activities and strengthening the protection of critical infrastructure, as well as increasing the presence of its officers at busy public intersections.
Orbán’s domestic security chief advisor, György Bakondi, said there is no threat of terrorism in Hungary but at times of such serious events as the Brussels attacks all “ties” need to be checked, which is why the heightened terrorism alert was introduced. Bakondi said the attacks have proven right the government’s projections according to which illegal mass migration results in a crisis situation in public safety and poses risks to national security, so uncontrolled entrants must be stopped.

Everybody wants a strong Europe

Szijjártó said the terrorist bombings in Brussels, Paris and Turkey show that the more uncontrolled arrivals are allowed in Europe, the greater the dangers become. It must be clear now to all that the right response is not “to open the gates even wider” but to “protect ourselves” and end “insane policies” allowing uncontrolled entrants, he said.
The minister stressed the need to intensify the fight against Islamic State, and said that as long as a breakthrough against the terrorist organisation is not achieved, attacks similar to the ones in Brussels may happen.
Democratic Coalition leader Ferenc Gyurcsány also called for a strong Europe. We need “less nation-state selfishness and greater common strength”, he said on his Facebook page. The former prime minister added that his party’s decision to join ruling Fidesz in voting for Hungary to join international action to fight the so-called Islamic State had been the right one. He said terrorists cannot be made peace with but must be fought. IS wanted to destroy everything that Europe held dear: freedom, democracy and respect for each other.
The Socialists and the radical nationalist Jobbik party agreed with the government’s order to temporarily heighten terrorism alert in Hungary at the second-highest level, the two parties’ representatives in Parliament’s defence and law enforcement committee said.
Jobbik MP Ádám Mirkóczki said no one could predict whether similar acts of terrorism may be committed elsewhere.
Tamás Harangozó, the committee’s Socialist deputy chairman, said the second-level terrorism alert could remain in place for no more than a few days.
The government and the security services will inform a special session of the national security committee this week whether it is still justified to maintain such a high level of alert, he said. 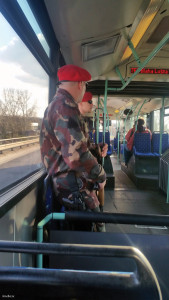 József Kis-Benedek, an associate professor at the National Public Services University, told state news agency MTI that the terrorist attacks in Brussels were meant to send multiple messages to Europe. Kis-Benedek said the bombings, for which the Islamic State militant group has claimed responsibility, can be interpreted as an attack against western civilisation, western religion and the European Union.
He said the attacks were well-coordinated and were not entirely unexpected. Law enforcement agencies have been continuously monitoring suspected terrorist organisations since the attacks in Paris last November, he added. The attacks might also demonstrate that Islamic State has chosen to engage in asymmetric warfare after the international coalition’s efforts severely weakened its military power. The fact that one of the bombs was detonated near EU institutions was meant to serve as a message to the bloc, Kis-Benedek said.
He emphasised the importance of the timing of the attacks, noting that the coming Easter holiday guarantees that many people would be travelling then. One of Islamic State’s goals would have been to cause “as much chaos as possible” with the various air and rail delays and cancellations in the wake of the bombings.
Asked which country the terrorist group may be looking to target next, the associate professor said it was highly unlikely that the next target would be Hungary. Islamic State would be more likely to target cities such as Paris, Rome, London or a German city.
Kis-Benedek urged security services to take note that the explosion at Zaventem airport happened in the departure terminal, an area accessible to anyone from the street.

President János Áder expressed condolences to Philippe, King of Belgium, over the blasts in Brussels. Áder said he was deeply shocked to learn about the blasts that claimed the lives of several innocent people. He expressed his deep condolences on behalf of the Hungarian people to the families of the victims and wished the injured a fast recovery. The “merciless evil acts” committed in Brussels again highlight the need on the part of the international community to fight terrorism with concerted and consistent action, Áder said, adding that Hungary is committed to supporting efforts aimed at protecting human values.