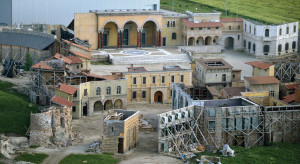 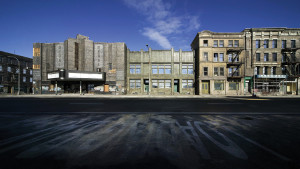 The full capacity of Hungary’s film studios has been reserved for several years in advance, business daily Világgazdaság reported on Monday. Citing figures from the Hungarian Film Fund, the paper said film-makers had spent 72 billion forints last year, up from 39.9 billion in 2012. Film-related spending between 2010 and 2014 accounted for 0.15 percent of Hungary’s GDP, 2.5 times the European average. The leaders of Korda Filmstúdió (pictured) and of the Origo Film Group, however, told the paper that growing demand has created a shortage of film-making experts, and insisted that the current staff may need to be doubled.

Unions of national bus operator Volán will stage a five-day strike from March 28 after wage talks failed. The unions are demanding a 3 percent wage rise and 5,000 forint extra benefit payment per month, union leader Zoltán Baranyai told state news agency MTI. He said they have been in talks with the Hungarian national asset management company, the owner of Volán, for weeks without agreement. Baranyai said they agreed with the owner on the services Volán is required to provide under the strike law, so 75-80 percent of buses would be operated during the five days. 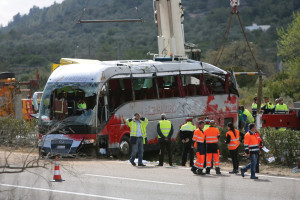 A 24-year-old Hungarian man broke both arms in a bus accident in Spain on Sunday morning. A staff member at the Hungarian consulate in Barcelona said the man was being treated in hospital and required no assistance for the time being. He was the only Hungarian on the bus, which was carrying Erasmus programme students from Valencia to Barcelona. Thirteen people were killed in the accident and a least 30 were seriously injured. A further 13 passengers suffered light injuries.

A Hungarian and French police investigation has led to the arrest of 12 men suspected of trafficking Hungarian prostitutes to France. In simultaneous raids by Hungarian police in Csongrád county and France on Monday, cash and assets worth several hundreds of millions of forints were seized, including 14 luxury cars. Viktória Csiszer-Kovács, national police spokeswoman, said the raids in Hungary involved more than 200 police searching houses at over 20 sites in Csongrád county. French authorities allege that the ring set up by a family in Szeged sent at least 40 young Hungarian women to work as prostitutes in Bordeaux, Nizza and Strasbourg. Most of the income was spent on purchasing property and other assets in Hungary, Ferenc Szanka, the spokesman for the local prosecution office in Csongrád county, said. The French authorities are seeking the suspects’ extradition, and they face 10 to 20 years prison.

Sedentary lifestyle, carbohydrate-rich diets and excess calorie intake have led to a severe increase in obesity among Hungarians over the past 40 years, the chairman of the Hungarian Obesitology and Movement Therapy Association (MOMOT) said at the organisation’s 16th congress in Budapest last Friday. Robert J. Bedros said the statistics, which show that 63 percent of men and 61 percent of women are overweight or obese, put Hungary third-to-last among Organisation for Economic Co-operation and Development countries in the organisation’s 2014 obesity report. Bedros warned that obesity and the rise of body mass index heighten health risks such as high blood pressure or diabetes. 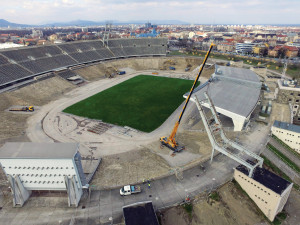 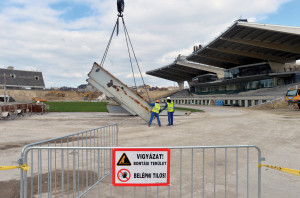 The expansion of the Puskás Ferenc Stadium in Budapest began on Monday with the disassembly of its concrete structure. György Skardelli, the project’s head architect, said certain elements will be kept from the old structure, such as the tower, which will be turned into a museum. The new stadium’s pylons will also be similar to the old one’s. Skardelli said all three levels of the expanded stadium’s seating area – capable of holding 65,000 spectators – will be roofed. The upgraded stadium will meet all of UEFA’s Euro 2020 safety requirements, with the emergency evacuation time being reduced from 20 minutes to eight. Puskás Ferenc Stadium will host four matches in the European Soccer Championship in 2020. Besides soccer, it will be suitable for hosting a variety of events, such as concerts and conferences, and could accommodate 78,000 people, Skardelli said. The expansion is scheduled to start in December and be completed in 2019.

Effective regulations do not ensure “legal conditions for a legitimate strike”, László Palkovics, the state secretary in charge of education, has responsed to a recent call by protesting teachers for a one-hour strike on March 30. Palkovics insisted that the interests of “children, teachers and schools” can only be served through “dialogue and joint efforts” in the government-initiated public education roundtable. He said the government is in consultations with the strike committee of teacher union PSZ and “there are some open issues”. István Pukli, a headmaster who has become the symbolic leader of the teacher protest movement, announced the strike plan before tens of thousands of demonstrators in Kossuth tér. He said the one-hour strike would be held unless leaders of the country apologised to teachers for ill-advised measures in the past six years. Prime Minister Viktor Orbán said in response that he took the ultimatum as a joke. 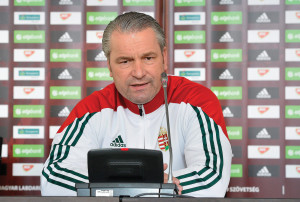 Bernd Storck, the German coach of Hungary’s national 11, has extended his contract by another two years until June 30, 2018, Sándor Csányi, the president of the Hungarian Football Association, said on Monday. Storck will continue to be assisted by his countryman Andreas Moeller, who won a World Cup and a Champions League title as a player. Storck was appointed in July 2015 and led Hungary to the European Championship finals for the first time since 1972. The team will play with Austria on June 14 in Bordeaux, Iceland on June 18 in Marseille and Portugal on June 22 in Lyon at Euro 2016.