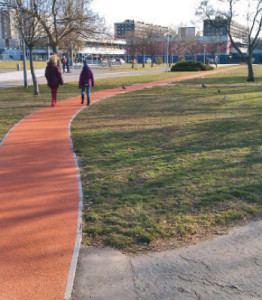 Bad weather is no longer an excuse to avoid putting on your running shoes again and going for a jog or stroll to boost your physical and mental health. With less clothing, the sins of the cold season become visible. If you need to catch your breath after climbing stairs, it’s time to challenge your weaker half.

Whether you are a beginner, couch potato, occasional sportsman or active runner, Budapest offers numerous opportunities for jogging for everyone. The most popular spot is Margaret Island, also referred to lovingly as the “green lungs of Budapest”. You can call it the island of recreation and sports.
Margaret Island has a five-kilometre running track around the whole periphery. You can see runners here at any time of day, exercising and enjoying the view of the Danube on one side and nature on the other. If the island is too crowded for you, there are plenty of interesting alternatives in Budapest:

Bikás Park – the topic is sport

Bikás Park in District XI will make the hearts of sports lovers beat faster. The small but very modern park is surrounded by an 800-metre, circular, high-quality running track, and athletes can train outdoors here using fitness equipment for free. The park offers an ergometer, a pulldown machine, dips bars and a grip-pull bar. Furthermore, there are a basketball court, football court, table-tennis tables and a surface for roller-skating. In addition to the greenery, runners can enjoy a motivating, lively atmosphere: people of all ages use this place as a meeting point. Families with children relax at the playground while older people sit peacefully on benches, enjoying the lively scene. They often have a smile or even a cheering clap in store for joggers. The heart of the park is the central hill adorned by artwork titled “Monda” by István Kiss. You can walk up to see this bull statue, or just sit on the hillside and enjoy the green benefits of Buda.
How to get there: take the line M4 to the stop “Bikás Park“ 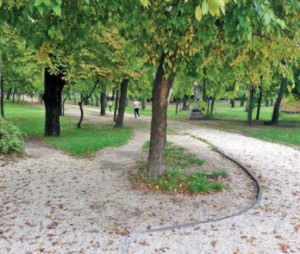 This is the Pest counterpart of Bikás Park. It is an inner-city spot in District VIII not really known for its green surfaces but the park, also called Orczy Garden, has been transformed over the past few years, and the changes are still going on. New, modern buildings have been built around the park and new green surfaces have been established within the park. As you are running, you can observe that this is a highly frequented destination for families with children, especially the adventure playground and the small lake with ducks. On hot summer days people come for the shade provided by its dense trees. The 800-metre running route leads through the park, although its tartan surface still has to be completed. As in Bikás Park you can access free fitness equipment, plus there are a football court, two basketball courts and a tennis court. After the workout runners can relax on the huge lawn and enjoy the view of the imposing Hungarian Natural History Museum, or visit nearby Füvészkert, the oldest botanical garden in Hungary.
How to get there: take the line M3 to the stop “Nagyvárad tér”

Gellért Hill, shared by Districts I and XI, rises above the Danube with its majestic beauty and offers runners an unforgettable view on the city. However, this is a classic case of “work comes first, entertainment afterwards”:  the hill on the Buda side is definitively for advanced joggers. Still, the prize, namely the unique panorama, definitely makes the hard work worth it.  You can choose either the narrow stairs or the flat, evenly paved paths to ascend the steep hill. There are plenty of seats on the way up to take a rest. For motivation, the view gets nicer and wider the higher you go.  The top point is at 235 metres, where we find the Statue of Liberty, depicting a woman holding a palm leaf high in the air. At peak times, however, you will be sharing this great jogging destination with many tourists. A hint for new runners: shin problems are guaranteed unless you get some experience first for running uphill. In general it’s always recommended to run uphill at walking pace to relieve the knees.
How to get there: take the line M4 to the stop “Szent Gellért tér“
Alternatives and encouragement
Besides the above mentioned running tracks Budapest offers many more opportunities. For example, a run in City Park behind Heroes’ Square is a must for all joggers. You can discover many interesting routes along the Danube and combine them with crossing various bridges. The Szabadság and Elisabeth bridges carry fewer tourists than Chain Bridge. If you are still not motivated enough for running, ask friends and acquaintances to join you. This helps because it subconsciously appeals to your sense of duty and personal reliability. Finally, do not overburden your body when keeping fit. Even though exercise regulates the blood pressure and stabilises circulation, it should be done sensibly. Numerous studies have concluded that it’s more than enough to go jogging for one to a maximum three hours a week. You should always keep a not too high, moderate pace when running.
For additional running routes visitwww.walkjogrun.net
With so many opportunities, Budapest is really a top place for runners. The city has established a good reputation over the years and it offers some notable and popular marathons as well. This year’s dates: