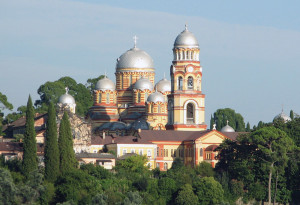 Monastery of St. Simon the Canaanite

Several dozen countries, airlines and Hungarian tourist destinations gave out their glossy brochures at the large annual travel fair in Budapest last month. Perhaps the most unusual place to have a promotional stand in the hope of attracting visitors was the small and disputed Black Sea territory of Abkhazia in the Caucasus.

All but the better informed may have a problem pinpointing Abkhazia on a world map, and how many could name the capital or indeed much else about the place such as the medieval Besletsky Bridge, the Great Abkhazian Wall, the Kodor Gorge or the Valley of the Seven Lakes?
Abkhazia is to the northwest of the former Soviet republic of Georgia, from which it broke away in 1992, prompting Georgia to send in troops. Abkhazia’s point of view is that it was forced to become part of Georgia in 1931, that it has always been a republic and that after the collapse of the Soviet Union it had a right to exit from the USSR just like the other republics did.
Fierce fighting in Abkhazia in 1992-93 ended with Georgian forces being expelled, along with tens of thousands of Georgians, but the bloody battle for independence ruined the Abkhazia economy. The economic loss is estimated by Abkhazia at USD 13 billion.
Abkhazia declared its independence from Georgia in 1993. Under a 1994 ceasefire, peacekeepers arrived, nearly all Russian. Russia is Abkhazia’s only other neighbour, to the north. In 1999 Abkhazia declared independence as a state and in 2004 Georgian president Saakashvili vowed to restore Georgia’s territorial integrity and return Abkhazia to the fold. In 2008 Russia formally recognised Abkhazia’s independence and there has been major Russian investment, as Moscow seeks to consolidate its influence.
Thus an uneasy situation exists and The Budapest Times, fearless as ever but strictly neutral, runs the risk of upsetting one side or the other by touching on this touchy subject. Abkhazia is not recognised internationally and its presidential election of August 2014 was denounced as illegal by the European Union and Georgia. Georgia declares Abkhazia “occupied” by Russia, and Tbilisi was angered by the “strategic partnership” signed in 2014, accusing Moscow of seeking to annex Abkhazia.
But enough of politics and this independence struggle for the moment. The breakaway region, whose capital is Sukhum, has a population of almost 250,000, less than half what it was pre-war. The major language is Abkhaz, with Russian used for inter-ethnic communication. The main religions are Orthodox Christian, 70 percent, and Islam, 16 percent, with 4 per cent Catholic.
The currency is the ruble and natural resources are agricultural, primarily citrus fruit, hazelnuts, tea and timber, with some coal and hydro-electric power. The writing is based on the Cyrillic alphabet.
Abkhazia is small: 8700 square kilometres with a land boundary of 418 kilometres and a 220-kilometre Black Sea coast. The Abkhazian natural heritage is pretty much summed up by the scenery of the Caucasus Mountains and its coastline. Sixty-four percent of its territory is occupied by tall mountain ranges, reaching over 4000 metres, and caves and grottos contain stalactites and stalagmites, a 100-square-metre underground lake and a three-station underground rail line. 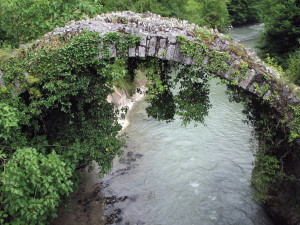 The gem of the mountains is Ritsa Lake, an alpine water reservoir almost 900 metres above sea level. One of the holiday residences of Stalin is there and can be reached by boat. Abkhazia, as part of Georgia, was once known as a prime holiday destination for the Soviet elite. There is an abundance of ecologically clean sweet water, healing springs, hot mineral springs, mountain rivers and lakes.
Forests cover more than 55 percent of Abkhazia: oak, beech, hornbeam, chestnut, fir, spruce. Like much of the coast on this side of the Black Sea, the beaches are mostly rocky. About 50 kilometres separate the mountains and the sea, and it is a region that encompasses all climatic zones, from rainforest to perennial snow and glaciers.
Abkhazia has a mild climate. The average annual temperature is 15°Celsius. The summer is hot and humid, with an average 27-28°C, and it can stay warm until the end of October. Winters are the warmest in all of the Caucasus. Snowfall is rare and the average temperature in January rarely falls below 7°C. The coastal lowlands have a subtropical climate.
Land crossings can be made from Russia and Georgia. An entry permit is required from Abkhazia’s Ministry of Foreign Affairs. When visiting via the Russian Federation it is necessary to have at least a double-entry Russian visa for entering Russia on the way to Abkhazia and again on the way back out. You should leave Abkhazia via the state you came from: it is not allowed to transit through Abkhazia from Russia to Georgia or vice-versa.
Sukhum has an airport but the unresolved political situation prevents its use and there are no regular flights. Airplanes inside the country use it, as do private fliers and visiting Russian officials. Hungarians might consider using Wizz Air’s direct flight from Budapest to Georgia’s second city, Kutaisi, and proceeding from there.
Apart from its scenic beauty, one of the sights of Abkhazia is the Monastery of St. Simon the Canaanite established by Russian monks in 1875 in Novy Afon, or “New Athos”. The monastery was built in the 1880s with donations from Russian Emperor Alexander III, then closed by the Bolsheviks in 1924 to be returned to the faithful only in 1994.
By that time it had served as a warehouse, hostel and field hospital that saved many lives during the war. Many lives were also lost thanks to machineguns located in the belfries. The gold-leaf frescoes date from the early 20th century. Another of Stalin’s residences is nearby. A man with an egalitarian ideology needs a few places to brush up his thoughts.
Christianity came to Abkhazia in the first century and there are noteworthy churches from the sixth, eighth and 10th centuries. Further from heaven and nearer hell is the deepest cave in the world, Krubera cave in Gagra city: 2197 metres deep and 13.4 kilometres long.
Sukhum’s Monkey Nursery was renowned in Soviet times for training monkey astronauts, with eight of them making space flights in the 1980s. At its peak about 5000 monkeys were kept there but now it has only around 300 African and Asian monkeys.
Lonely Planet summarises: “Parts of Abkhazia’s towns still have a strangely underpopulated feel, but the coast and countryside are beautiful, and just being inside this curious territory with a throwback Soviet atmosphere is a fascinating experience.” Indeed, over a million Russian tourists visit every year and from other countries too. A group of Hungarians came last year.
The self-proclaimed independent Republic of Abkhazia remains a disputed region, and Russia, Nicaragua, Venezuela and Nauru are the only United Nations member states that recognise it as an independent nation. Where are Kosovo and Palestine when you need them?