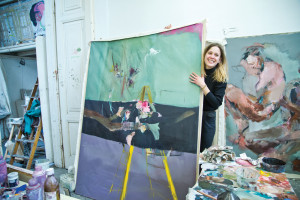 The young artist Luca Rózsa was born in Budapest in 1990. In her youth she began to take drawing lessons. After graduating school she was not sure at first if she should study art, music or dance.
Today she is convinced that she made the right choice.

The studio of Luca Rózsa is under the roof of the Hungarian Academy of Fine Arts. Already in the dark entrance hall it smells of paint and canvas. When one climbs the stairs, with each floor the rooms get lighter and the smell of the colours is more intense. In the corridor to her studio one can catch a glimpse through the door crack of working graphic designers, sculptors and painters. The air shimmers with creativity.
Rózsa divides her studio with four other masters students of the Fine Arts. Her spot is at the left front corner of the large, square room. The canvases stack up high to near the ceiling. There are colour-blotched chairs and a faded orange sofa. “Down the hall there is an even bigger studio and there I have more than 40 additional artworks,” she says. “When I finish my last semester I will have to look for a different studio to paint and store.”

How it all began 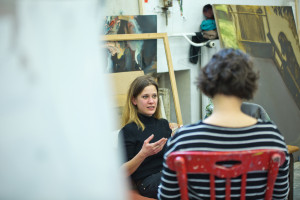 It was a long process to traditional visual arts. “Actually, I wanted to study veterinary medicine. But when I was 16 I realised that it is not enough to only love animals but also the biological and chemical fields,” Rózsa smiles. Although she has painted since she can remember, after school she was unsure whether she would like to work in the artistic field.
“Just because I have learned to be technically good during my time in art school, I was still far away from being a real artist,” she believes. She applied to university and never thought that the short time of an interview would be enough to convince them to give her a place.
At first Rózsa wanted to focus on graphic design but painting fulfils her like nothing else. She decided six years ago to become an independent artist. “Today I can’t imagine doing anything else.”
The 25-year old artist studied in Hungary, Poland and Ukraine. “The Eastern European, post-communist states inspire me. There where not everything is perfect but the people proceed anyway. There where many ugly points are but it smells like life.”

American painter, photographer and object artist Cy Twombly is one of the most important representatives of abstract expressionism and is for her a great inspiration. His paintings combine the features of abstract painting with typographic drawings into a fine fabric-like style. “I do not create abstract art but I find it very inspirational,” Rózsa says.
Also Albert Oehlen, a German painter, object and installation artist of neo-expressionism, who was harshly criticised for obscene details in his works, is on her list. “I could go on with known artists who inspire me every day but nothing influences me more than the atmosphere in the university,” she says. “I see my fellow students in their studios, talk to them, see the development and their impressive works. That is what motivates me like nothing else.”

Emotions that cannot be expressed with words 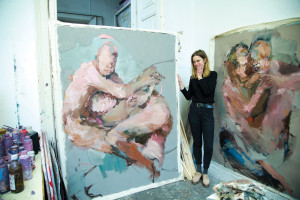 With her traditional artwork, Rózsa wants to capture emotions that cannot be described with pure words. In this way she mostly deals with interpersonal relationships, psychic phenomena, such as the doppelgänger delusion, and the afterlife. Why does it happen, why one feels like that, by whom is someone influenced, if so, how and why?
“I don’t expect the viewers of my pictures to understand it right away or just see what I see in them. But I want to evoke an emotion, even shock. I want to produce a feeling.“
With rough but confident brushstrokes and gentle colour gradients she forms on large canvas mostly human figures. Creating the final motive is a process. “An experienced emotion gives me the impetus to paint a new picture. Sometimes I lose the emotion, it changes and I start to experience it differently. The idea of the image is changing in the creative process.”
She often paints over already created figure parts. But there will always be something that remains of the first idea. It is one of the truths behind the finished work she would never hide. “Sometimes I know that something has to go, to create something better.”
If she does not know what to paint over, she puts white paint on it or blurs the part with chemicals. “If nothing better than the empty spot comes to my mind, then it will remain like that, because then it fits.”
After seven years Rózsa is almost at the end of her studies of Fine Arts. Most of this time she has spent in Hungary. “I want to stay here. Of course I can imagine working abroad for a certain period but I don’t see the point why everyone wants to leave our country. When everyone leaves there is no possibility of change.” She wants to continue to live and work in Hungary, although it does not always seem to be easy to work as a free artist here.

Apart from this, artists must exhibit their work steadily and present their pieces in galleries, but this is often not enough to pay for an average quality of life. Although Rózsa regularly does this and until now has not had to pay fees for studying, has had several scholarships and is participating in many competitions, she finds it difficult to finance her art. Paints and canvas for one picture alone will cost around HUF 25,000. Only when the picture is sold does money for living costs come in.
“Luckily it is easy for me to let go the artworks. When I have finished a piece, I’m also done with the emotion.“
With the issue of financial problems, Rózsa is not an isolated case. And she is aware that this will not change in the future.  Alongside her studies she works as a set designer and is spending the summer in a socially-oriented children’s camp, where she teaches arts and English. This is not the only issue why it can be difficult to follow the path of an independent artist in Hungary.
“I think we have a lot of great artists to offer who don’t get enough attention on a worldwide basis. Because of Hungarians‘ economical and political situation, they don’t have the chance to present themselves openly.“
In her opinion the problem begins early, in schools, where art is only very superficially taught and the theory is almost left out. And if policymakers are not interested in art, it is difficult to progress. Critical art seems to be a taboo and it is difficult to exist when not much more than still-lifes and abstract art are accepted.
Rózsa has no clear path she follows: “I don’t  do art to get rich but to make a difference.“