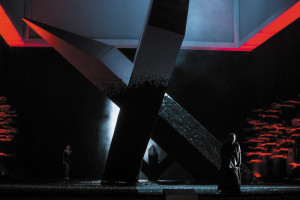 “Macbeth” and “Otello” are magnificently dark productions lifted from the tragedies of Shakespeare and magically transformed into operas just as tense and atmospheric by master of tragedy Giuseppe Verdi. Each one will play only two nights in May and already look close to selling out. 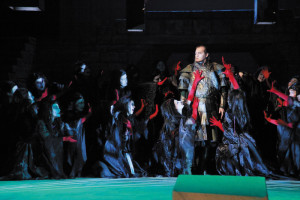 They are both unmissable, brilliant in their unique staging. “Otello”, which premièred last September in the Opera House, is dark, brooding, epic and wonderful. “Macbeth”, with its sinister black magic and many night-time sequences, has been notoriously cursed as a production that even some directors are superstitious about taking on. But Verdi loved the supernatural; he saw in Shakespeare’s work his own intense majestical score, so suited to tragedy.
Stefano Poda is director, set, costume and lighting designer for “Otello”, and his epic black and white set design consists of stark Escher-inspired cubes and walls of outstretched hands that speak of paranoia, grasping for light and life where there is none.
The stage set and lighting are consistently dramatic, reflecting the emotions that rage through the leading characters Iago, Otello and Desdemona, who appear doll-like on the immense set.
Gergely Madaras/Pinchas Steinberg conduct Verdi’s heavy and war-like score, rich and raven-black, the notes speaking of tension, jealousy and ultimately tragedy, emotions still as relevant today as they were in Shakespeare’s era. Otello is performed by Rafael Rojas/Lance Ryan and Desdemona by Gabriella Létay Kiss/Andrea Rost.
“Macbeth” is also a production of spellbinding darkness, whether performed as a drama or an opera. It has long been associated with bad luck and witchcraft, which is why Verdi loved it, and it is fitting that the composer would delve into perhaps Shakespeare’s darkest work and set it alight on the opera stage.
The composer’s fascination with ghosts and darkness is evident; he wanted not just three witches but a chorus of them. Verdi’s obsession with curses and fortune-telling also runs through some of his other operas such as “Il Trovatore”, “Rigoletto” and “Un ballo in maschera”’.

“Macbeth”, with its dramatic, moody set designs by Péter Horgas and direction by Miklós Szinetár, is mysterious and atmospheric, and this sinister quality crackles through the air and throughout Verdi’s dark powerful score, skilfully conducted by Renato Palumbo. Macbeth is performed by Lado Ataneli with Szilvia Rálik as Lady Macbeth.
“Macbeth” also has some of the finest quotes in literature, which still hold such contemporary relevance. As the curtains close on Verdi’s opera, it has cast its own spell over the audience and one of the most famous quotes of all springs to mind:
“‘Life’s but a walking shadow, a poor player
That struts and frets his hour upon the stage and then is heard no more”
(William Shakespeare, “Macbeth”, Act 5, Scene 5)