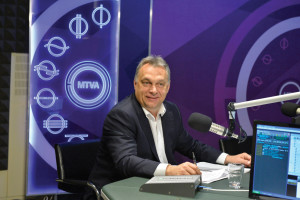 Our problem does not concern
the distribution of refugees but
protecting the border: Orbán

A plan by the European Commission reported by the Financial Times to charge member states that refuse to receive migrants 250,000 euros per migrant is “hair-raising”, the government spokesman has said.
According to Prime Minister Viktor Orbán the idea is “outrageous” and the leaders in Brussels are sitting in an ivory tower. Meanwhile Parliament has approved calling a national referendum initiated by the government on the EU’s mandatory migrant quota scheme.

Orbán said in his regular interview with Kossuth Radio last Friday that the proposal is a “kick in the stomach” and it is difficult to find civilised language to describe it. He said each Hungarian has received around 4000 euros in Brussels funding over the past seven years and 250,000 euros for an average Hungarian would amount to 39 years of earnings.
After reports surfaced about the proposal, government spokesman Zoltán Kovács told the public radio station that the fee amounted to “blackmail”. In a separate interview to M1 public television news channel Kovács said the government wants to prevent migrants from coming to Europe illegally.
Unless they genuinely need protection they should not set foot in Europe, he added. According to Kovács, the government’s so-called Schengen 2.0 proposal serves this aim, and an increasing number of people support it.
The real line of division in Europe runs between those who obey the common border protection rules and those who don’t, Kovács said. The government wants a Europe where strong member states can make decisions on issues that affect them, such as with whom they want to live in future. This is why a referendum on the mandatory migrant quota is timelier than ever and its result would be impossible for the EU to neglect, he said.
Orbán accused the leaders in Brussels. “They don’t recognise the reality and they have no idea what they’re talking about,” he said. Referring to the Commission’s “penalty” proposal, he said: “There has never been any stronger propaganda against the idea of the European Union.” Commenting on the Brussels proposal for automatic distribution of migrants between EU member states, Orbán said the “left wing pushing the measure” had always denied that the plan would be forced on member states, but now the Commission itself had disclosed it.
“This is no game. They want to take away the right of Hungarians to say with whom we wish to live and with whom we don’t want to live … ,” he said, calling on Hungarians to line up against the Brussels plan, which he described as a “complete mistake”. The body is preoccupied with issues regarding refugees whereas “our problem does not concern the distribution of refugees but protecting the border.”
Orbán said the defence of the borders must be fortified and refugee centres must be built outside of the EU. Hungarians had demonstrated the greatest solidarity in migrant affairs, only “I did not have the cheek to invoice Brussels for the registration costs of 175,000 migrants … the extra costs incurred by Hungarian police … and the costs of building a fence … We acted in a European manner.”
In central Europe, including in Hungary “we are in control of the situation … we do not go along and approve the disappearance of our cultural heritage overnight and there will be no parallel society developing here,” Orbán said.
He described the planned referendum on the mandatory migrant quotas as “clear, simple and comprehendible”. He also had an “authorisation to say no” but his word was not worth as much as the word of “ten million Hungarians. We are doing the whole referendum to stop Brussels”.
Commenting on former NATO secretary-general Javier Solana’s remarks that were Hungary to apply for EU membership today it would be rejected, Orbán said “we know the former NATO secretary-general” and “he is an old communist”.
Foreign Minister Péter Szijjártó said the government will not succumb to blackmail over the European migrant quotas. Speaking after a meeting with his Visegrád Four and Eastern Partnership counterparts in Prague, Szijjártó called the proposal a “dead end” and repeated the government’s position under which “it is not up to Brussels but to Hungarians to decide whom we welcome to live in the country”.
György Bakondi, the prime minister’s security advisor, said the implementation of the so-called solidarity contribution plan could have serious long-term political, economic and social consequences for the bloc. Bakondi told M1 that the proposal could change member states’ social compositions and have serious ramifications on the bloc’s security.
He said the plan went against the EU’s founding treaty as well as every single one of its laws. By implementing the plan, migrant quotas would become a permanent part of the EU’s legal system. This way, the countries most affected by migration, such as Greece or Italy, could simply redistribute thousands or tens of thousands of migrants among other EU countries once they felt that they had received too many entrants.
Bakondi said it would be impossible to determine how big of a fine countries who reject migrants would ultimately have to pay if such a system were to be introduced, as it is also impossible to determine the exact number of migrants who have entered Europe. The most conservative estimates say that 1.5 million migrants did so last year while others put the number at 2 million, he noted. Several other countries had also criticised the “solidarity contribution” and insisted that the plan must be stopped.
Minister in Charge of the Prime Minister’s Office János Lázár said the European Commission’s proposal is “anti-democratic and inhumane”. The plan under which member states would be fined 250,000 euros per rejected migrant would deprive members of their right to self-determination
Lázár said that in an extreme case moving migrants to Hungary could significantly change the country’s demographics. What is happening is that those who “invited” the migrants to Europe have picked some and now want to distribute the “remainder”, he said.
The proposal was inhumane because “it ignores the intentions of migrants” who do not want to come to Eastern Europe but stay in Germany. It “evokes the darkest years of Europe” because “it would appraise people by their origin”, which goes against all European values, he added.
Lázár said the proposal is “blackmail”. In response to a question from the media, he said it would be wrong if Germany, being one of the richest countries in the world, made Hungary pay for settling the issue. 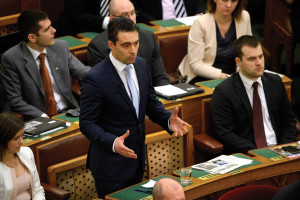 A constitutional amendment is needed instead of the
referendum: Vona

Parliament has approved calling a national referendum initiated by the government on the EU’s mandatory migrant quota scheme. The initiative was approved with 136 votes cast in favour by MPs of the ruling Fidesz and Christian Democratic parties, and the opposition Jobbik. Five independent MPs voted against. In the vote, lawmakers also approved allocating a maximum 4.9 billion forints for the national ballot.
Appeals against Parliament’s decision can be submitted to the Constitutional Court within 15 days, and the court has 30 days to make a ruling. The referendum is then to be called by the president of the country within 15 days, and held on a Sunday during the period between the 70th and 90th consecutive days.
Prime Minister Viktor Orbán announced on February 24 that the government would initiate a national referendum on the migrant quota. The reason given by the government is that only Hungarians and not Brussels can decide who they want to live together with in their own country.
In the referendum Hungarian citizens will be asked: “Do you want to allow the European Union to mandate the resettlement of non-Hungarian citizens to Hungary without the approval of the National Assembly?” The question was submitted on behalf of the government by cabinet office chief Antal Rogán and the election committee approved it in late February.
Four appeals were submitted which the Kúria, Hungary’s supreme court, rejected in early May. Rogán said the referendum could most likely be held in September or early October.
Opposition parties lambasted the Parliament’s passing of the referendum motion. Even Jobbik – which voted for the proposal – said that Fidesz is always one step behind when it comes to the issue of migrant quotas.
Party leader Gábor Vona told a press conference that a constitutional amendment is needed instead. A referendum would have been timely in 2015 when Jobbik originally proposed it, but by now it won’t be enough.
Amending the Constitution could be done quickly, without having to wait until the autumn, Vona said. “Time isn’t on our side, with the European Commission working on new absurd proposals.”  Even if Hungarians rejected the quota, if the referendum was not valid and successful, it could be counter-productive.
The Socialist Party said it went against commonsense for Parliament not to approve their proposal to hold the migrant quota referendum on the same day as their two proposed referendums. The Socialists’ referendums concern the government’s state-owned land privatisation programme and the introduction of a 2 million forint cap on public officials’ salaries.
Lawmaker Gergely Bárándy said the ruling Fidesz party would have had ample time to wait for the National Election Office to certify the signatures the Socialists had collected in support of their referendum initiatives, after which Parliament could have voted on the three referendum proposals at the same time. Bárándy said his party would continue its “anti-Fidesz” signature drive.
The Democratic Coalition and Együtt parties said Prime Minister Viktor Orbán would use the referendum to try to “win a mandate to drive Hungary out of the European Union”. Both parties said they would stay away from the vote and would call on their supporters to follow suit.
Fidesz called on the leftist parties not to appeal to the Constitutional Court over the referendum. János Halász, a spokesman for the Fidesz parliamentary group, called the referendum “one of the most important matters” in Hungarian history. He stressed that the Hungarian people should be left to decide if they want Brussels to resettle migrants in Hungary.
Halász said the referendum was “urgent” because Brussels is putting forward “increasingly aggressive plans” to redistribute migrants among EU member states. He said it was “lamentable” that certain MPs had “openly expressed support” for the migrant quota scheme by voting against the referendum.