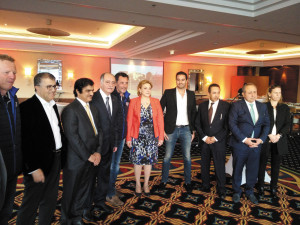 Racing driver Mehdi Bennani won for the Sébastien Loeb Racing Team at the Hungaroring circuit on Sunday. Before the race The Budapest Times sat down with him for a quick chat.

Bennani’s victory was the second of his World Touring Car Championship career, following one in 2014, and was achieved in challenging conditions. Rain had been falling throughout the morning, easing off just in the two hours before the race and making it difficult for the teams to decide which tyres to use.
The Sébastien Loeb Racing Team chose well and the Moroccan driver was able to ease his Citroen to an accomplished victory, leading from start to finish thanks to the benefit of his pole position on the reversed-grid pole – when the fastest in practice start from the back to increase the entertainment value. Bennani had come 10th-fastest in practice.
Briton Tom Chilton, Bennani’s team member, came second in the race, followed by Dutchman Nicky Catsburg.
The night before, the WTCC organisers invited a few racing officials and embassy people to meet Bennani. Diplomats from some Arab countries such as Qatar, Morocco, Palestine and Jordan attended. Between talking to the ambassadors, posing for pictures and discussing the forthcoming race, Bennani had time to admire the beautiful view of the Danube and the Castle District facing the hotel he was staying in. We caught him for a few minutes for an interview.

How old were you when you first drove a racing car?

It was in Morocco and I was 15 years old.

What makes driving in a racing car especially difficult?

As you can see I am quite a tall man. The car is small and it is extremely hot in it. Sometimes the temperature climbs over 65 Centigrade. During a race I lose about 2.5 kilograms.

What was the fastest speed you ever reached?

What kind of car do you drive in your private life?

Since I drive Citroen cars during races this is the kind of car I use in my private life also.

Have the police caught you for fast driving yet?

Since I am an ambassador of safe driving I try to drive in a way that I keep to all safety rules and regulations. I have not had to pay a fine yet.

I am well aware that they are not for sale but how much would one of these racing cars cost if they sold one?

These cars as you said are not for sale so they have no commercial value and I have no idea how much would they cost if they were sold. They are all prototype productions.

Which was the most memorable accident you had in your career?

I had many accidents. Perhaps the most memorable one was when I crashed while doing 300 km/h. I don’t remember much except that when I came around I was already in a hospital.

How long does it take to get out of the car in case of an accident?

If the accident is such that the driver can still move and he is not unconscious he/she should get out of the car in less than four seconds.

How much petrol does your car use during a 14-lap race like the one at Hungaroring?

That depends on the conditions but the technicians could tell you this as they are watching the fuel level.

How much is the monthly payment of your insurance policy?

It is a secret but I can tell you that it is far too much. Naturally it comes handy in case one has an accident, and we racing drivers have many accidents.