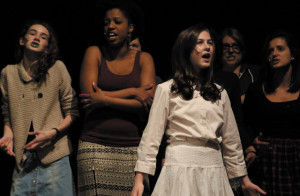 The things I don’t know about Hungary and Hungarians never cease to amaze me. I hear something new that I think I should have heard by now, or should even have known from a previous life, and I wonder where I’ve been all these years.

Am I the only person in the country who didn’t know that Rodgers and Hammerstein based their musical “Carousel” on Ferenc Molnár’s 1909 play “Liliom”? Or that the musical “She Loves Me” is set in 1930s Budapest and is based on the play “Parfumerie” by Hungarian playwright Miklos László?
And although not related to Hungary or Hungarians, does everyone know that the song “Count Your Blessings” from “White Christmas” was inspired by composer Irving Berlin’s doctor who, when asked to prescribe something for Berlin’s insomnia, suggested he recite a list of everything he had to be grateful for? Berlin lived to be 101, by the way, so perhaps there’s something in this.
Anyway, you might wonder where this newfound trivia knowledge has come from. Enter eso theatricals – the latest addition to Budapest’s English-language theatre offer and the first to my knowledge in the English-language musical theatre business. I went to see the highly entertaining “A Night of Broadway” last weekend and was educated.
With numbers from the greats such as “Oklahoma”, “South Pacific” and “Fiddler on the Roof” to more modern musicals such as “Rent”, “Hair” and “Once”, it was the stuff cold evenings are made for. The international cast, all currently living in Budapest, hail from Brazil, the USA, the Netherlands, Ireland and Hungary.
I was particularly taken by “What is this Feeling” from “Wicked” where 13-year-old Sonya Ewing nailed the green-faced Elphaba and sixth-grader Gianna Martinelli stood her ground as Galinda. Texan Danielle Jones did Velma justice with her take on “All that Jazz” from “Chicago”. And hats off to Ireland’s Declan Hannigan and Brazil’s Nicole Chufi for their take on my favourite number from the musical “Once”: “Falling Slowly”.
What tied it all together though was the narration. Introductions to each number gave it context as we travelled through time and followed the evolution of the Broadway musical. (It was a shame that the soundtrack was often louder than the voices. I found the same, the last two times I’ve been to concerts at Mupa, too. And no. It’s not me. I’ve had my hearing checked.)
The evening was directed by American Peter Schueller. Schueller, originally from California, is no stranger to TV and film (watch out for him in NBC’s upcoming “Emerald City”) and since being in Budapest he has been acting, directing, music directing and choreographing showcases and performances throughout the city.
I saw him recently in Budapest English Theatre’s production of Martin McDonagh’s “The Pillowman” and was impressed.
Now eso theatricals are in the process of becoming a non-profit organisation with the aim of developing community and professional English-language theatre in Budapest. They’re looking for in-kind donations and fund-raising opportunities, so if you’ve always fancied yourself as a patron of the arts here’s an opportunity. And if you’re interested in performing, they’re open to that, too.
In addition to last week’s amateur musical revue, they’re planning a professional musical theatre show later this year. I hear tell it’ll be the musical horror “Sweeney Todd”.
Next month though, eso theatricals will be flexing their acting muscles when they stage Theresa Rebeck’s provocative comedy “Seminar” at Spinoza Színpad on Dob utca featuring Tamás Lengyel as Leonard, an international literary figure (originally played by the late, great Alan Rickman when it was first staged on Broadway in 2011) who gives private writing classes to four aspiring young novelists.
There’re two performances scheduled: 7.30pm on Saturday, May 28 and 2.30pm on Sunday, May 29. Definitely one to watch out for.
www.esotheatricals.com/

Mary Murphy is a freelance writer and public speaker who loves a bit of theatre. Read more at www.stolenchild66.wordpress.com