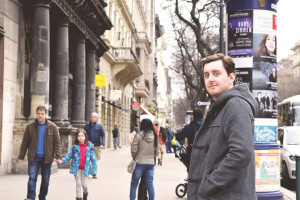 The young Englishman is a freelance journalist and author. Last autumn he first visited Budapest and after just a week he decided to stay. He wanders through the streets of the “Paris of Eastern Europe”, where he finds the inspiration to write.

I well remember my first day in this fantastic city, says Adam Barnes. “It was autumn and the roads were riddled by colourful leaves. The sun was shining and most of the day I was promenading through the streets. From the first moment, I felt comfortable and I found in the irradiation of these powerful and steeped-in-history buildings alone the inspiration for which I was looking for so long.”
Although he has only lived in Budapest for a few months, the city already feels like home.
He started writing when fairly young. “When I was 11 years old I had to write a short story. At that time I had just got a new adventure video game and I clearly loved it. I wrote from the perspective of the heroine. At the end she dies. The surprising turn is that the reader now finds out that it all just happened in a video game and not in reality. That was the day when I found a passion for writing.”
So even as a schoolboy he was diligently pursuing this passion. But at the same time it was very difficult for him to admit it, because he was the only one of his friends whose hobby was writing and it did not seem to be very “cool”.
Now and then he wrote stories he gave the teachers to correct. They were always well reviewed but he never wanted them to be read out loud. When classmates asked him what he was passing to the teacher, he used to say it was a cover letter for a college – even though it was a little early for that.
When he finished school Barnes started to study English language, literature and creative writing. After graduation he worked for five years in a publishing house and wrote articles for manuals, about computer games and new technologies.
It became routine, limited and technical, and stirred a desire in the young Englishman for a change of location and to work as a freelance writer.
Originally Barnes comes from Blackburn, a town in north-west England. “There, as the cliché often describes, the Englishmen work during the week and drink with their mates in the pub on weekends,” he says. “It is rare to leave those small towns and especially to travel to a foreign country. I am an exception and therefore the black sheep in my family, because I want to see the world. As a writer I can work anywhere.”
In 2014 he quit the publishing house and began work as a freelance journalist. He writes regularly for English print and online newspapers. His topics are whatever comes to him, from a press conference to the loss of his passport in Canada, which forced on him a wonderful trip.
He rarely has to meet with an editor in person. Many of them he has known for a long time from working in England. There he could set up a trust through which he can easily work from 1882 kilometres away – the distance from Budapest to Bournemouth, where he spent his last two years in England.
“Now I finally had the job I wanted to have, which gave me the opportunity to write a book! There was really nothing to stop me from leaving England. I wanted to finally begin to explore the world and needed an inspiring environment for my planned book.”
He researched Europe. He had always wanted to live in Greece but did not want to risk a country with such a bad economy. Almost by accident he found a suitable flight to Budapest and arrived last November for the first time. He was immediately attracted by the magnificent old buildings and the exuberant cultural scene. The many small bars, restaurants and coffee shops cast a spell over the young writer.
“Within a week I rented my own apartment and through international meet-ups for expats I found quite fast a new social environment,” Barnes recounts.
In England he sees himself as a more introverted person, whereas he finds the energy of multicultural Budapest allows him to let go, to open up to strangers, to be the funny nerd, class clown or serious writer.
“It is to easier be social here. As I come from a small town and was automatically always with the same people. I did not have to make any effort to go out. In Budapest I have to and it makes me feel good. It gives me the opportunity to develop my personality in a free way.”
The cost of life in Budapest for most foreigners, especially if they are paid in pounds or euros, is low. The location of the city is probably also not to be underestimated. “Sometimes I fly in to press conferences in England; from Budapest it is not a problem,” Barnes says. “It is grotesque: if I fly to my family in England from here it is cheaper than taking the train to London.
“In particular the favourable exchange rate allows me to live a relatively luxurious life in Budapest. In Bournemouth the living costs were inordinately high and you are forced to pinch every penny.”
While Hungary still seems to suffer in many respects from its communist past, not to mention the current policies, it has established itself lately as an international metropolis and the multicultural environment and openness of the people makes it welcoming for newcomers.
“The city and the people offer me a new source of inspiration at every corner. It is worth simply sitting down on a bench and watching the bustle. In Budapest for the first time the place is determining what I do and not the other way around. I am curious to see what experiences the city still holds for me.”