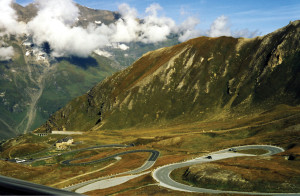 May is here, and with it the annual opening after winter of Austria’s Grossglockner High Alpine Road, ranked as among the most beautiful panorama roads in the Alps for 81 years.

Sixty million or so visitors from around the world are estimated to have travelled on the 48-kilometre road, described as Austria’s most striking landmark, since it opened in 1935. The number is about 900,000 a year at present and it is apparently one of the country’s top three attractions.
That’s a notable fact, considering the road is only open six months a year until early November, while the weather allows, and considering that Austria also hosts a few other minor sights, such as Vienna’s Hofburg and Schönbrunn palaces and generally spectacular mountain scenery.
The Grossglockner is the country’s highest mountain, reaching 3798 metres above sea level. Thanks to the Grossglockner High Alpine Road it is no longer necessary to put on hiking boots to get a close-up of the pyramid-shaped summit. Motorists, motorcyclists and bicyclists who negotiate the 36 hairpin curves find the most spectacular view at the Kaiser-Franz-Josefs-Höhe visitors’ centre and lookout, 2369 metres above sea level, from where the Grossglockner seems to be within reach.
Here is a seven-kilometre panoramic view taking in the longest glacier in the eastern Alps, the Pasterze, marmots frolicking nearby, birds of prey and, hopefully, some ibex, a species of wild goat with impressive curved horns.
Sixty surrounding mountains top 3000 metres and the Hohe Tauern National Park, encompassing the area, has diversified fauna and flora. At 1834 square kilometres this is easily the largest of Austria’s seven national parks as well as the largest nature reserve in the Alps
A number of information signboards, nature trails, lookout points, museums and exhibitions can be found along the Grossglockner High Alpine Road, giving visitors an impression of the nature reserve, the road’s construction history, alpine ecology and historic trade routes. Four themed playgrounds are available for children.
The Alpine Nature Show Museum features the world’s only exhibition on alpine ecology and has an exhibition “Crystals – the Treasure of the Hohe Tauern”. A preserved road maintenance building at Fuscher Lacke (Fusch Lake) contains documentation on the building of the road and the workers’ living conditions at the time.
Up to 140 different species of plants and a small nature show can be found in the Glockner Meadows between the Rasthaus Schöneck and the Glocknerhaus. The winding road is lined by a wide variety of restaurants, souvenir shops and practical service facilities, such as biker safes.
The Kaiser-Franz-Josefs-Höhe visitors’ centre is at the end of the 48-kilometre drive and offers a diversified program on four floors, with national park Information, an exhibition titled “The Fascinating Ice & Glacier,” a power room titled “The Grossglockner Mountain as a Force,” the Glockner Cinema and changing special exhibitions.
This is also the point of departure for a one-hour walk on the panoramic Gamsgruben Trail, which runs high above the Pasterze Glacier. The Kaiserstein Panorama Trail leads to the Wilhelm Swarovski Observatory, where the glacier and possibly mountain climbers and wild animals can be viewed through telescopes. The Glacier Trail leads directly to the Pasterze Glacier and on to the Glockner House.
Construction of the Grossglockner High Alpine Road began in summer 1930. Nearly 4000 men laboured on the six-metre wide sand road for five years. The most modern high alpine road of its time was ceremoniously opened on August 3, 1935. The adventure begins at Heiligenblut (“Holy Blood”) village.
The road was continuously developed for decades, starting at the end of the 1950s. It was widened to 7.5 metres, the radius of the hairpin curves was enlarged to 15 metres and the number of parking spaces doubled. Hohe Tauern National Park opened in 1981 and the world’s highest charging station for electric vehicles is at 2369 metres, after its opening in 2010.
The Grossglockner High Alpine Road has fees. A day ticket is EUR 35 for cars and EUR 25 for motorcycles. From the beginning of May until June 15 it is open from 6am to 8pm. From June 16 to September 15 the opening time is 5am to 9.30pm, and from September 16 until early November 6am to 7.30pm.
info@grossglockner.at
www.grossglockner.at