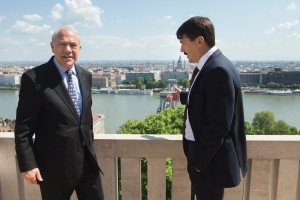 “Strong economic growth has returned” to Hungary, the Organisation for Economic Co-operation and Development said in a survey last Friday, putting GDP growth at 2.5 percent in 2016 and 3 percent in 2017.

Presenting the survey in Budapest, OECD Secretary-General Angel Gurria said significant progress had been achieved but numerous challenges persist. More can be done to improve macroeconomic performance by building upon existing achievements, such as cutting fiscal spending, fighting tax fraud and relying more on less distortive consumption taxes, Gurria said.
Barriers to domestic business investment should be removed and Hungary must “double its efforts” to improve skills and match them to job requirements, he added.
Macroeconomic imbalances are being corrected, state debt as a percentage of GDP is falling, the country is running a current account surplus and financial vulnerabilities have been reduced, the OECD said in the 2016 Economic Survey of Hungary.
The OECD noted, however, that non-performing loans still hamper bank lending, income levels remain well below those in more advanced economies and, as economic slack disappears, sustaining growth will require structural reforms to strengthen the business sector and upgrade skills.
Investment growth has started to pick up, supported by faster business capital accumulation as well as inward foreign direct investment and European Union funding, the OECD said. But business investment is still “held back by frequently changing regulatory environment and entry barriers in network industries”.
The organisation said the education system has reacted slowly to labour market changes, leaving many graduates without needed skills. Training in public work schemes has not been effective enough in generating relevant labour market skills, it added.
In a summary of the survey’s main findings paired with recommendations, the OECD said Hungary’s public debt is still high, considering the openness and vulnerabilities of the economy. It also said public spending is high, compared to the country’s income level.
The OECD recommended gradually reducing spending over the medium term to further lower the structural deficit, and said officials should “monitor and limit contingent public liabilities in the electricity sector”.
It faulted the tax system for still relying “a lot” on labour taxation, and urged Hungary to rely more on “non-distortive consumption taxes while monitoring the income distribution consequences”, as well as stepping up the fight against VAT fraud.
The OECD recommended officials “improve transparency, stability and formulation of regulatory policies”, as well as “continue efforts to cut red tape and make better use of regulatory impact assessments”.
Sector exemptions should be removed and a modern competition policy framework applied as widely as possible. Mergers that might reduce competition should be systematically reviewed and only allowed on clear public interest grounds.
Looking at ways enhanced skills can support growth, the OECD said more focus should be given to training programmes that get workers into the primary labour market, lifelong learning should be promoted and vocational training programmes should be more integrated into secondary vocational schools.
It recommended increasing funding and expanding means-tested support for disadvantaged students as well as providing incentives to tertiary institutions to better respond to labour market needs.
In an inventory of actions Hungary had taken paired with relevant recommendations, the OECD acknowledged relief for borrowers with foreign-currency mortgages and the conversion of foreign-exchange retail loans to forints, a decline in state debt and a reduction in the bank levy, among other measures.