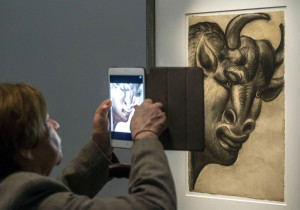 You can read the huge poster at Buda Castle from far off: Pablo Picasso is in Budapest (1895-1972)! Well, at least his works are. The Spanish painter, graphic artist and sculptor was one of the most celebrated artists
of the 20th century: eccentric, controversial and famous in his long lifetime. What made him immortal was especially his diversity, from his Blue Period to Cubism to Surrealism. You can marvel at the drawings, paintings and sculptures from all his periods, in the Hungarian National Gallery until July 31.

Seeing a real Picasso from up close – this should be on the “list of things that I ought to do at least once in my life” for all educated people. However, we rarely get the chance in Hungary to be able to see so many Spanish works of art collected in one place as at “Picasso – Transfigurations, 1895-1972”, the largest Picasso exhibition seen in Hungary.
Picasso once said, “Give me a museum and I will fill it up”. He left behind some 50,000 works when he died in 1973. The curators, Emilie Bouvard from the Paris Picasso Museum and Ferenc Tóth from the Hungarian National Gallery, picked 100 for the exhibition.
Seventy-four are from the French museum, which entered a one-of-a-kind collaboration with the Hungarian National Gallery to organise this showing.

The main focus is primarily Picasso’s presentation of the human body and how this changed over the course of his life (1881-1973). Seven rooms grouped chronologically and thematically present the different periods of his work – from early on to his dip into Cubism, his rediscovery of the “classical line” and his confrontation with Surrealism, up to his depictions of war.
The rooms are enriched with much background information about each phase. This explains in Hungarian and English the events that deeply influenced Picasso, especially his fellow artists and the various women who were his muses. The detailed exhibition is completed by a video installation about him and a photo series showing his numerous workshops.
Sometimes the flood of information can become overpowering, and perhaps this world-class display is best seen in two visits.