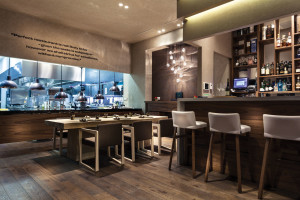 Do you think that rock’n’roll and fine-dining don’t make a good match? Budapest businessman Károly Gerendai proves the opposite. The old rocker and founder of the legendary Sziget Festival won a Michelin star this March with his second fine-dining restaurant, Costes Downtown. The Budapest Times tested the spring menu of the high-class but indigenous restaurant.

Although he swapped the hoodies and band T-shirts for branded shirts a long time ago, Gerendai could not say goodbye to his rocker mane, which he wears in a ponytail. When he organised the first Sziget Festival in 1993, he “just wanted to organise a large party for all of my friends”, he says.
Over the years this got a little bigger, namely to the largest open-air festival in Eastern Europe. Back then he never thought that he would come to own not one but two restaurants with Michelin stars. 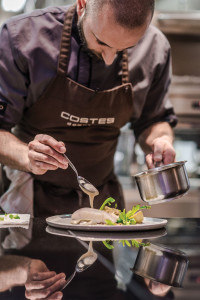 “As you can see, I like eating,” Gerendai concedes, stroking his tummy. During his many business travels over the years he learned to value international fine-dining restaurants, and he wanted to establish a place in Budapest that could reproduce this global quality.
“Ten years ago there was no such high-quality kitchen in Hungary,” he says. In 2008 he opened Costes with his business partners in the Budapest restaurant street Ráday utca, which was the first Hungarian restaurant awarded with a Michelin star in 2010.
Five years later he opened Costes Downtown in the heart of the city, which this year became the fifth Hungarian restaurant awarded with a star.
Costes and Costes Downtown are connected by their motto “Quality without compromise”. This guarantees that both have personnel with the best possible training, use high-value ingredients and are each supervised by Portuguese star chef Miguel Rocha Vieira, who created their menus. The daily business in Costes Downtown is conducted by the sous chefs Tiago Sabarigo and Petra Tischler. 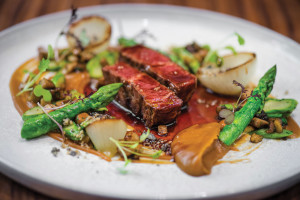 In comparison with its big brother, Costes Downtown offers an essentially more relaxed atmosphere, void of all formal expectations. The star restaurant does not require wearing a tie, and casual clothing is more suitable. “People should be able to feel good and relax here,” Gerendai says.
There is no trace of uptight behaviour and old-fashioned rules here. The interior design communicates this relaxedness: brown tones, a lot of wood and brickwork, modern straight-lined furniture that unites form and function, green plants everywhere and heavy ceramics: quirkiness encounters fine-dining.
Since it’s located in the Prestige Hotel, Costes Downtown starts its daily operation by offering a breakfast menu, which is primarily eaten by hotel guests but also a few external clients. However, the really busy hours are lunchtime and dinnertime, both awaiting customers with their own tailored menus. 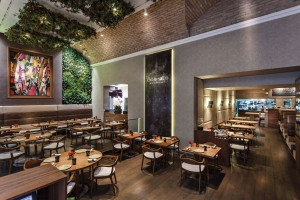 In general Costes Downtown offers international classics presented in a contemporary way, for example the always recommendable duck breast with corn mash and a decorative red-cabbage leaf, which reminds us of the traditional way of preparation, or the loin of veal served on a bed of sugar peas and bread sauce is also a good choice.
You won’t be making a mistake either should you choose one of the numerous fish dishes offered at Costes Downtown. The chef often uses ingredients from the so-called “superfood” group, which is becoming more and more popular. This is food that is supposed to be especially healthy. Classical garnishes such as potatoes or rice are substituted by healthier grains, such as quinoa, barley or millet.
On prior request the restaurant will fulfil requests for special nutritional needs, such as a gluten-free, sugar-free or even paleo diet, as András Lexa, the manager of Costes and Costes Downtown, explains. 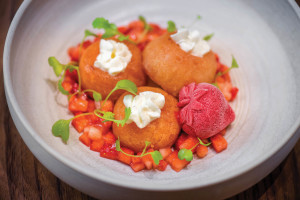 Join the chef at the kitchen table

Costes Downtown has a special offer for gastro fanatics: a place at the “chef’s table” with a direct view of the work going on in the open kitchen. Originally the concept of the “chef’s table” includes placing improvised seating in the middle of the kitchen, where diners may nibble on samples picked out directly from the simmering pots.
At Costes Downtown you get a little more comfort, sitting at a large wooden table in front of the kitchen, where you can watch the preparation of your meal from up close, which is a surprise menu put together personally by the chef. Since such an event requires planning, the “chef’s table” must be pre-booked.
All in all, Costes Downtown offers a relaxed and much more open atmosphere than most of the star restaurants with this level of quality. You will be at the right place here if you enjoy the bistro-style represented by the restaurant and if you would like to take advantage of the relatively more moderate prices. Costes Downtown is also the right choice for groups due to its large capacity.