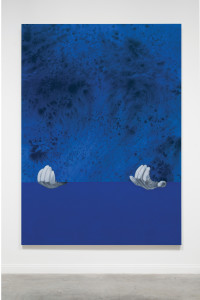 Budapest Art Factory (BAF), the artist-run initiative managing an international artist residency program,has reopened the doors of its lofty studio complex for the 2016 season. During the May-October period the organisation invites acclaimed artists from around the globe for a months-long stay in Hungary. The mission of BAF is to cultivate and preserve a multicultural environment in which the visual arts thrive.

Upon entering the repurposed former turbine factory in District XIII’s Angyalföld (Land of Angels), one might be surprised to discover that the archaic, downtrodden building is in fact an incubator for art, where artworks are both created and exhibited. The 800-square-metre hall consists of multiple studios, and houses the three contemporary Hungarian artists – Márta Kucsora, Dóra Juhász and Sándor Szász – who founded the organisation.
In addition to working towards developing their own individual careers they engage with the larger cultural zeitgeist by co-ordinating an artist-in-residence program. Since 2013, internationally recognised artists have been invited to Budapest to work towards an exhibition that corresponds to the guests’ own idiosyncratic artistic practice.
Due to the founders’ commitment to the arts, the constant infrastructural developments and practical support offered to its residents, the BAF residency is increasingly becoming an internationally recognised and sought-after program. This year the BAF has attracted participants from the US, Russia, Latvia and France.
The first guest artist of the 2016 season, Sayre Gomez, an American painter, sculptor and installation artist, began his residence at the beginning of May. Being the artist’s first experience of the sort, he accepted the invitation in hopes of investigating new resources and working methodologies that may not have been accessible or apparent to him if he were working routinely within the comforts of his studio in Los Angeles. 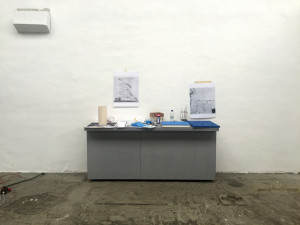 During his time in the Hungarian capital he plans to absorb as much as he can from the unchartered environment while trying to remain productive. “Budapest is a stimulating city,” he explains, adding that as an artist from the US it is especially intriguing to investigate the history, heritage and current social climate of a former Soviet state.
By listening to the narratives of those who experienced the regime and its fall first-hand, he is further immersed in the contrasts of economic and political ideologies, and the dilemma of how the West currently interprets former Soviet countries. Although he is young (born in 1982), he is already represented by a number of galleries internationally, from Los Angeles and Miami to Germany and Belgium. Each gallery operates in a different contemporary art centre, and all help to foster his career by providing a comprehensive platform for promoting and exhibiting his work.
Gomez makes works in a variety of mediums that strive to operate in opposition to the familiar conventions of an artist who creates and builds their career centered around a singular “signature” style. The most important aspect of his work is his paintings that are represented through a number of different series.
His most well-known works are his “Untitled Painting” series and his “Thief Painting” series. The former uses highly viscous paint to create large black and white stains that are then sprayed with pigmented varnishes to create vibrant colour fields. The latter is a series of airbrush-rendered pictures of a white-gloved pair of “thief” hands opening a window, set atop a stark black background.
The two while visually quite different both fit within a conceptual framework that challenges the ideas of authorship, ownership, appropriation and seriality.
The artist also ruminates on diverse methods for exploiting the exhibition space when presenting his work, and the effects that the installation may have on the perception of his works. He mentions posthumous Los Angeles artist Jack Goldstein as an exemplary figure who utilised the space in unorthodox ways when modes of installation were considered.
This play with exhibition design is also apparent in the exhibitions he organises, a goal of which is to create a dialogue between artists acknowledged by professional art circles and those who work outside the remit of the erudite cultural scene.
For example, one group show he helped to organise, “CULM” at Night Gallery in Los Angeles, included both the work of Viennese painter and installation artist Heimo Zobernig as well as the work of H.R. Giger, the father of the Alien that has been popularised by the Hollywood film franchise.
His work to be conceived at BAF will be a series of paintings that explore the use of trompe-l’œil, an art-historical technique that creates realistic, illusions on the picture plane. His new series of paintings will be introduced on May 30 from 6-9pm at the Budapest Art Factory project space with a vernissage open to the public.