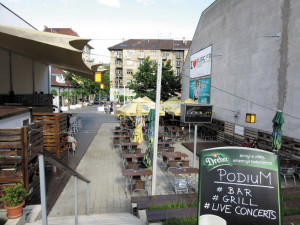 Budapest is blossoming. Local neighbourhoods are being revamped. Buildings are getting facelifts. Previously drab and uninspiring places are now teeming with life and energy. And in times when many find it hard to think of anything positive to say about this country, it’s nice to see something good happening.

I  freelance. My time is my own. When there’s work, I work. And while I’ve never been a slave to routine, I occasionally fall foul of habit.
For years I’ve been taking the No. 9 bus from Harminckettesek tere to Kolosy tér once a month or so. Yes, there are quicker ways to get from one to the other but the No. 9 is direct, no changes. It’s familiar territory.
Last week, himself had an appointment in Óbuda and I went with him. He likes his apps and had figured out the quickest, if not the most direct route to take. Some battles aren’t worth fighting. His plan involved the 4/6 tram to Margit híd and then changing to the No. 17 tram. Same direction, same part of town but a slightly different route.
The 17 tram runs up Bécsi út cutting right through Kolosy tér, parallel to the No. 9 which takes Lajos utca. It had been a few years since I’d actually been in Kolosy tér itself and I was surprised.
Its namesake, György Kolosy, was alive and well and practising law when during the revolution of 1848 he got himself into a spot of bother and fled to Transylvania. Like Jókai, he, too, escaped dressed as a woman. He hid out for a couple of years before surrendering to the Austrians and being executed. Some 50 years later, Kolosy tér took his name.
At this end of the square, too, at the intersection of Lajos utca and Nagyszombat utca, you can find the ruins of a Roman amphitheatre. Back in the day, its arena was bigger than the one in the Colosseum in Rome. The things you learn, eh?
There’s a sculpture of Ferenc Puskás kicking a ball around with some kids across from the aptly named Puskás Pancho Sports Pub, which is just up the street from the old stalwart, Symbol. There’s also quite a strange sculpture that looks for all the world like a bunch of very, very large boobs. Am not quite sure what to make of it.
From high-end boutiques to the Bookr bookstore, from fine china to quality leather goods, there’s plenty to spend your money on. And if you’d rather eat, you’ll be spoiled for choice. The neighbourhood has it all, including three sushi restaurants.
Some of the ones I used to frequent have closed down, their spaces taken by newer, shinier models. The Taste of India is the dreamchild of Kunal Verma who hails from Delhi. He’s doing his bit to bring the real taste of India to Budapest rather than the westernised fare we have become used to. And he’s doing it very well indeed. It’s worth going out of your way to see for yourself.
Pódium is at the heart of Kolosy tér. This garden bar is bike friendly, dog friendly and people friendly. It has a great range of drinks, good barbeque and live music. In short, everything a garden bar needs.
Closer to Szépvölgyi út, there’s the Buda Gourmet bistro and market. This stylish restaurant, next door to an upmarket Prima, is set to offer strong competition for the downtown Sunday buffet lunches featured at the likes of the Kempinksi and the Gellért.
I hear tell that Saturday and Sunday brunch at the Buda Gourmet has featured crocodile and rib eye. And that’s a rumour I intend investigating in person. Soon.

Mary Murphy is a freelance writer and public speaker who occasionally takes a different route. Read more at www.stolenchild66.wordpress.com