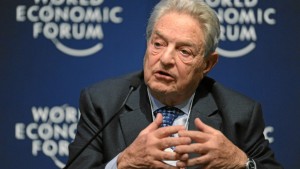 Hungarians and Poles rightfully deserve more respect from the current and former leaders of the United States, Prime Minister Viktor Orbán has said in an interview with public radio. He approved of the reaction to former US president Bill Clinton’s comments by Polish PiS party leader Jaroslaw Kaczynski, who urged Clinton to consult a doctor.

Orbán and Minister Overseeing the Prime Minister’s Office János Lázár said George Soros, a Hungarian-born US financier, is behind the recent negative remarks.
Lázár said at a regular press briefing that Soros’ flagship idea is one advocated by US President Barack Obama, namely that migrants should be moved to Europe. The minister said the Hungarian government believes that Soros is an influential supporter of the US Democratic Party and the Clintons, and he will “make room” for his views at any cost.
Lázár added that Soros is likely to take action soon against the Orbán government, “which is considered one of his most dangerous political enemies in Europe”. Soros “can always be detected in the background,” Lázár insisted. Hungary is against migration, a position that conflicts with that of “several European powers and the United States”, he said.
Asked by US news agency AP, White House spokesman Josh Earnest said he was unaware of Lázár’s remarks, before adding that “I’m not sure they’re worthy of a response”.
At a campaign event for his wife Hillary at the College of New Jersey, Clinton had referred to Hungary and Poland as “two countries that would not be free but for the United States and the long Cold War”. He said now Hungarians had decided democracy was “too much trouble” and wanted a Putin-style leadership.

Issues of disagreement with US

Concerning ties with the US, Lázár said the Hungarian government is interested in strong bilateral relations, and while “Hungary is a reliable partner in such areas as defence or business, there are some issues on which there is no agreement”. He said “some US circles” think Europe needs immigrants. “We don’t see eye-to-eye with those Americans,” Lázár said. He would not identify those interest groups connected with the US administration.
Referring to the current situation in Hungary, Lázár said that since the beginning of the year 11,800 illegal migrants have entered the country, and 2472 of them are staying at the moment. This year, 221 migrants in Hungary had been granted international protection.
Soros pulling strings: Orbán
In a radio interview with public broadcaster Kossuth last Friday, Orbán said Poland and Hungary, as well as the rest of central Europe, had received negative comments ever since the migrant crisis began, and this was no accident. “Namely, we have to see behind the Democratic Party … George Soros,” he said.
Orbán insisted that Soros had urged Europe to take in at least one million Moslems, while Hungary had blocked this US plan hatched by Soros.
Commenting on Bill Clinton, Orbán said: “The mouth is Clinton’s, the voice is George Soros’.” He said the power of the Hungarian opposition is well below the political influence of organisations financed by Soros.
Orbán reiterated the position that Brussels treated Poles in an undeserved fashion and insulted them. “No matter how much they think they are the big boys in Brussels, this battle against the Poles will never be won by Brussels,” he said.
Commenting on the upcoming Hungarian quota referendum, he said a referendum is the only thing that Brussels cannot shake off. If the referendum were successful, Brussels would back off.
“The Hungarian government wants a democratic European Union whose internal relations, rules for everyday living, ethnic composition and culture are determined by Europeans, and not an elite of bureaucrats in Brussels who are acting in contrast to the wish of the European peoples,” Orbán said. He insisted that uncontrolled immigration is not a human rights issue but a security issue.
“Nobody wants to hand over the keys of his home to strangers,” he said. If Hungary allowed forced settlements, Budapest and other Hungarian cities would be impossible to recognise within 20 or 30 years.
Orbán said the state of affairs is slowly emerging that Germany and central Europe together can be called the core of the EU, since without the region the EU’s economy would not be growing from year to year but rather the opposite.
Discussing the continent’s demographic situation, Orbán said the question arises as to whether Europe wants to take part in the demographic contest or not. “Why should we grow our population at the same pace as other countries in the world?” He said Europe with its current population, or indeed a smaller one, is viable and sustainable.
It would be better were there more young people but this could only be achieved with family-oriented policies. “If we find economic tools [in Hungary] to ensure that families feel they can thrive with two, three, four or five children, then I think this can be undertaken,” Orbán said. “But don’t ask me to produce this result within a few years. For this we need a couple of parliamentary cycles.”

Orbán has much to thank Soros: DK

Opposition party Democratic Coalition (DK) said Orbán has “once again attacked his former benefactor”, Soros, to whom he and Hungary have a lot to be thankful.
DK said Orbán can thank Soros for his “scholarship in England” and it was also thanks to Soros’ money that other Fidesz officials, József Szájer and Zsolt Németh and government spokesman Zoltán Kovács, had completed their studies.
“Hungary, as it goes through its post-communist transformation, also has a lot to thank Soros for, so Orbán and Fidesz are not only ingrates but their actions are harmful to Hungarian-US relations, which are outstandingly important,” DK said. Orbán was perhaps driven by Russian interests when he knowingly damaged transatlantic relations, putting Hungary’s security at risk.
The ruling Fidesz party said DK leader Ferenc Gyurcsány was “always the first” to bolster the forces of immigration, “namely George Soros and Brussels”. Fidesz said DK attacks the anti-immigration Hungarian government and its prime minister.
The party added that Gyurcsány, a former prime minister, had planned to force into Hungary one million migrants. “In contrast to the party of immigration, DK, the Hungarian government is doing everything to stop Brussels.”