Hungarian actress Erika Marozsán, of the 1999 film “Gloomy Sunday” and others, now lives in New York with her husband and seven-year-old daughter but came back to Budapest to rehearse for a film of the play “The Parasites” by German dramatist Marius von Mayenburg.

The weather is almost like summer when we meet the petite actress at a café in District II. She looks tired but not dissatisfied at all: “Right now this is a very intensive period. I am only here for a week and we rehearse each day.”
Director Attila Kavisinszki is working to adapt “The Parasites” to cinema. “You can clearly see that Attila is coming from the world of theatre, since normally movies are not rehearsed so intensively,” Marozsán explains, stirring her cappuccino.
The filming should begin soon but the financing is not that simple: “In Hungary you need to collect the financial resources from 50 different places. Once all that is arranged, we can start shooting the movie.”

“Our rehearsals are going very well”

The play itself is very exciting for the actress: “The story happens in an apartment with a sea view. As Attila presented his concept to us so far, this play, that takes place within the room, will be opened up for the cinema version.” She is particularly looking forward to seeing how the difference between the confinement of the apartment and the view on the broad sea will be resolved.
The play itself is not new to her. She read it at drama school and “I think I have even seen an adaptation of the play here in Budapest once”.
Marozsán is playing the wife of the main character, who is stuck in a wheelchair. “Attila was relatively sure right from the start that he specifically wants me for this role. I believe that during the rehearsals he just became surer and surer that he made the right decision. Attila must have had another alternative in store but I think that our rehearsals are going very well.”
This is exactly why the passionate theatre actress enjoys rehearsing together. However, ”The Parasites” is also very demanding. “The play is very tricky, each scene has a thousand different meanings. Although the scenes look simple and uncomplicated at first, you can immerse yourself so deeply in them, you can go in so many directions with each sentence, which is rarely achieved by dialogues.”
Each word is reflected in the movements of her fine hands, and you could surely listen to her for hours while she speaks so passionately about her work. At the same time she is humble towards her craft: “The play is unbelievably rich. Just like good craftsmen, we are just trying to unpack the whole story and get to know it.”
Maroszán enjoys this period, since during the rehearsals it is not yet expected that everything works out perfectly. “We can allow our imagination to run free and try ourselves in many different situations.” 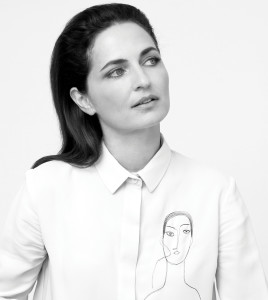 The week in Budapest is a return, as she now lives in New York. “I also used to work a lot in Germany: Hamburg, Berlin, Cologne – I have shot a lot of movies there but I have never lived there. Germany is a little bit like my second home country.”
She is especially comfortable with the German temperament, and she immediately felt at home in the new culture. “People are much more clear and unambiguous there.” Much to her regret, she has never played on the German stage. “Although I got many offers from theatres, at that time I used to work on movies too intensively and there was no time left for the theatre.”
It would have been a challenge, since “playing in a German movie or acting in a theatre in German are two very different things. I trust that I would be able to play in German theatre; if I knew my lines very well it should be all right. However, it would be strange, since if you have difficulties with your lines, solving the situation is incomparably more difficult than in your mother tongue.” Still, she would have been happy to try, she admits with a smile.

The centre of her life: New York

“Six or seven years after ‘Gloomy Sunday’ premiered in Germany it was also presented in America. After that an agency called me and they invited me overseas.” While she was looking for her chance in Los Angeles, her husband followed. “Finally we moved to New York. My husband was able to establish himself as a photographer there and I could travel to LA from there. Even Hungary and Germany are closer to New York.”
Although they spend the major part of the year there, the family moves back to Budapest each summer. This depends primarily on her because most of filming happens in the summer in the US. “We live in both cities. Our daughter begins the school year here and once I am done with the filming she changes to a school in New York.”
Commuting is stressful but it’s also extremely rewarding, Maroszán thinks. “Changing from one culture to the other is by no means easy. You always have to get used to a different background. The traffic is different and so are all the work days.”
However, somehow it suits her, since the actress is used to being emerged in strange roles: “When I am shooting abroad I always feel self-confident, since the foreign language lets me slip into a foreign role. The fact that the language used is not my mother tongue makes it easier to imagine myself in another person’s skin.” Thanks to the foreign language she can be much more open towards the role of another woman: “I am much more patient with her.”

The development of a role

She says the biggest difference between film and theatre is that in theatre it always comes down to the fact that “you live and die on stage”. And a play gradually changes with time, whereas in films the greatest challenge is to capture the whole depth of a role right away and transport it into the movie.
“The scenes are not shot in chronological order, so you can’t work up yourself to the emotional top of the film, as you do in a theatre. This is exactly what makes it even more exciting.” Both forms of acting have their values and difficulties but “both are exciting and unpredictable.”
Marozsán has been working in the business long enough to know that she should not take critics too seriously. There are productions with which she feels dissatisfied, and “I am not a masochist, so in such cases I do not read the critics at all”. However, if she is satisfied with a performance it is difficult to accept negative criticism.
So Maroszán reads critics only rarely. This does not mean that she is so self-confident she does not care about anyone else’s opinion, rather “I just reached a point in my life where I can simply let my roles go”.
She does her best at a shoot, then, once it’s done, lets the work run its own course. “Films are always the creation of the moment, I do not look back at these moments, I don’t try to go back and analyse them, I just let them fly. They don’t belong to me any more.”