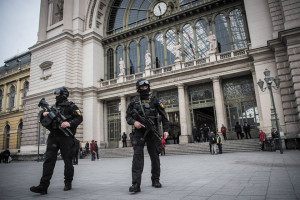 Parliament on Tuesday approved changes to the Constitution, paving the way for new regulations designed to handle the threat of a terrorist attack.

The sixth change to the fundamental law since its inception in 2012 passed by 153-13 votes with one abstention. The motion was sponsored by the ruling Fidesz-Christian Democrats alliance. Radical nationalist Jobbik MPs voted in favour, green opposition LMP and independent MPs voted against, and one independent abstained. The Socialists refused to participate.
In the event of a terrorist threat or attack a “state of terrorist threat” can be declared if two-thirds of MPs approve. Accordingly, certain laws can be bypassed and exceptional measures implemented.
The government is obliged to give constant briefings to the President of the Republic and the relevant parliamentary committees of measures enacted. The period in which such measures can be put into practice can last for a maximum of 15 days. The army can be mobilised if police or national security service resources are not sufficient.
Related to the constitutional amendment, Parliament amended several laws, and this package was approved by 152-42 votes with one abstention. The “act of terrorist threat” category now applies to the laws on police, national security and defence. The latter has been amended in a way that the army is authorised to use weapons if required.
Parliament also approved the Ministry of the Interior’s counter-terrorism package, which involves the setting up of the Counter-terrorism Information and Criminal Analysis Centre (TIBEK) as a national security service replacing the Coordination Centre Against Organised Crime.
TIBEK will operate under the ministry and its main task will be to develop a comprehensive assessment of the risk of terrorism or other threats affecting the country, based on the analysis of data affecting national security, public security and other basic security. TIBEK will operate an information supply system and prepare assessments for the government.
In line with an amendment to the original proposal on setting up TIBEK, services overseen by various other ministries will not automatically supply data to TIBEK. The rules of data handling by TIBEK will not be the same as in the case of other national security services, for instance it will not be authorised to secretly collect data.
The proposal regulates phone services and obliges service providers to release data to the authorities. The service providers must sign contracts with the national security services governing the conditions of secret data gathering. 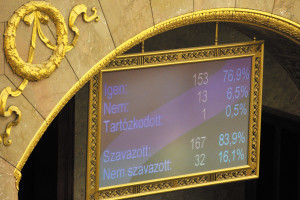 Under the new law, the counter-terrorism centre (TEK) will be authorised to protect not only specific individuals but also designated institutions. Under a proposal submitted by the opposition Socialists, the law on police will introduce the “heightened security” category applicable at the time of terrorist acts or during the preparation of such acts.
Accordingly, in addition to personal checks of identification documents, clothing and vehicles, and the seizing of hazardous materials, police will be authorised to stop events and restrict public transport or road transport.
Police will be authorised to introduce the heightened security measures for up to 72 hours, extendable by another 72. The national police chief can decide to extend heightened security for an even longer period if substantive and corroborated information so justifies.
Under a change in the criminal code, minors aged 12 to 14 years will be punishable for acts of terrorism. Anyone leaving or travelling through Hungary to join terrorist groups and those who incite or promote terrorism before the wider public will be punishable. The majority of measures will become applicable on the 15th day following the law’s proclamation.

The European Court of Human Rights in Strasbourg has turned down an appeal by the Hungarian government and upheld an earlier decision condemning Hungary for its law allowing secret surveillance and data collection by national security services without court consent.
In January the court ruled in favour of two employees of the Károly Eötvös Institute and ordered compensation of EUR 4000 to be paid to the plaintiffs. With the Hungarian appeal rejected, that ruling has now taken effect.
The ruling stated that the court found the Hungarian law problematic on one point in which it breached the Human Rights Charter’s provisions on the right to privacy. The authorities in a democracy can only ignore this right in cases where national security or public safety is at stake, or when a crime must be prevented or public morals or others’ freedoms must be safeguarded, the ruling said.

The opposition Socialist and LMP parties have submitted a proposed amendment to the Constitution so that “the armed forces can really be deployed within Hungary” in a state of terrorist threat, as against Tuesday’s constitutional amendment that primarily serves the government’s ambitions for power, the two group leaders told a joint press conference.
Socialist party and group leader József Tóbiás said the government had been given extensive powers as part of Tuesday’s counter-terrorism package. However, there was no need for introducing the legal category of “state of terrorist threat” by way of the constitutional amendment approved earlier on Tuesday.
Tóbiás said the approved amendment authorises the government to take the internet and postal services under control, evacuate people from certain areas, ban public events and impose curfews. What the government really wanted was to have this special legal category approved, and the Socialists did not support it because it only served the government’s ambitions for power.
Former LMP co-leader András Schiffer said the proposal submitted by the Socialists and LMP would enable the use of the armed forces for an even wider scope of purposes than what is included in the constitutional amendment. He said the amendment is only “tangentially” about the deployment of the army.