Many opportunities exist for further investments by Indian companies in Hungary as well as Hungarian companies in India, the fourth session of the India-Hungary Joint Commission on Economic Cooperation heard in Budapest on June 2 and 3. 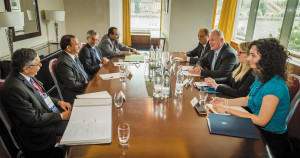 The Indian side was led by Shri Ramesh Abhishek, Secretary at India’s Department of Industrial Policy and Promotion, Ministry of Commerce and Industry, and the Hungarian side was headed by László Szabó, Minister of State for Foreign Affairs and Trade.
The Joint Commission noted that there are complementary factors between the two economies and these need to be encouraged. It was decided to explore possibilities of further co-operation in sectors such as water management, space sciences, energy transmission systems, science and technology, transport, education and culture, traditional medicines, biotechnology and the pharmaceutical industry, IT/ICT, shared service centres, automotive, logistics, renewable energy industry, tourism and the food industry.
The Hungarian side announced the creation of the post of Science and Technology Attache at its embassy in New Delhi, given the importance of co-operation between the two countries in this sector. The commission also decided to further strengthen co-operation in education by signing agreements and memorandums of understandings for mutual recognition of degrees and skill qualifications, and to facilitate tie-ups between Hungarian and Indian vocational training centres.
A meeting of the Joint Business Forum was held on the sidelines of the Joint Commission meeting, at which a 17-member delegation from India participated and held business-to-business meetings with Hungarian companies. 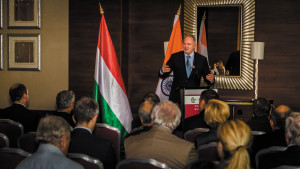 Abhishek in his address to the forum highlighted various sectors under Make in India and other flagship initiatives of the Indian Government, which present many opportunities for Hungarian companies.
Szabó welcomed the fact that Indian investments in Hungary are of the order of USD2 billion and Indian companies employ around 10,000 people in Hungary.  India was the largest investor in Hungary in 2014 and third-largest in 2015. A memorandum of understanding on co-operation between the Federation of Indian Chambers of Commerce and Industry and the Hungarian National Trading House was signed.