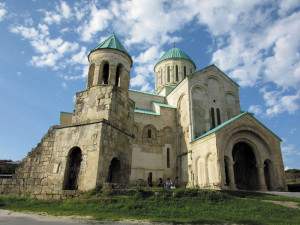 When I said we were going to Georgia for a long weekend, people assumed we were heading to the capital, Tbilisi. I told them that we were going to the second city but couldn’t for the life of me remember (or pronounce) its name. I knew next to nothing about Kutaisi other than that Wizz Air had an offer a few months back for a return flight in the region of EUR 80. I bit. I bought. And we marked our calendar. Some months later, we caught the midnight plane to Georgia (which actually leaves Budapest at 23.55 on a Friday night). 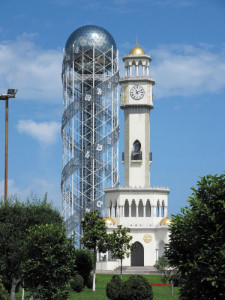 I didn’t do much by way of research. I wanted cheap, clean, basic accommodation with free airport pick-up and return. Considering that this combination can’t be found in Budapest, Dublin, London, Paris or any other first city, I was surprised to find it at the Hostel Luxe (as recounted in What Lies Beneath – page 29). And so, at 5.30am on Saturday, our Georgian experience began.
We slept for a few hours before taking the 30-minute walk downtown, a walk that gave an interesting insight into Georgian living: lots of little bakeries and pastry shops selling the ubiquitous cheesebread, khachapuri; a plethora of pharmacies that don’t seem to be suffering from the competition; and discount stores that focus on household cleaning supplies. 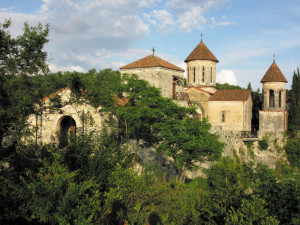 Everything looked quite basic. Wealth, if there was any, was well hidden. We quickly learned that speaking English was the prerogative of young women.  The locals were friendly, curious and willing to engage. Any notion that Georgia might be a dangerous place quickly vanished.
As we approached the Rioni River, which flows from the snow-capped Caucasus, visible in the distance, to the Black Sea, some 180 kilometres away, we happened upon the 19th-century White Stone Café. It was here from 1915 to 1930 that the Tsisperkantselebi met.
A group of symbolist poets, their aim was to bridge traditional Georgian culture with modernity. This was the first inkling we had of the depths of Georgian culture and a perfect spot from which to people-watch. Platform sandals are in fashion and black is the colour of choice for both the young, trendy scions and the more mature head-scarved women whose lined faces spoke volumes.
Georgia is said to be home to the first Europeans of 1.8 million years ago. The first country in the world to have vineyards and wineries, it is considered the birthplace of winemaking.  Lying as it does between the Black Sea and the Caspian Sea, it saw many traders travel the Silk Road connecting Asia and Europe, including the Greek Argonauts who allegedly came to Kutaisi to seize the Golden Fleece. 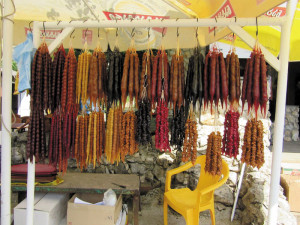 The country had its cultural heyday in the 12th century. The Russians paid a visit in 1801 and thereafter, despite a brief period of independence in 1918 that would last three years, Georgia wouldn’t become truly independent until 1991. The Rose Revolution of 2003 paved the road to economic development and the rebirth of tourism.
The country has very different regions, each offering its own particular delights: Javakheti with its healing waters; Svaneti with its medieval towers; and Racha-Lechkhumi, the mountainous region that produces Khvanchkara, the rich red wine favoured by Stalin. We were in Kutaisi, in the region of Imereti, famous for its historical monuments … and its cheese.
We paid a quick visit to the tourist office where the very helpful and knowledgeable Giorgi Gulua imparted his enthusiasm for his city and his country, an enthusiasm we would find again and again. Armed with tips, maps and brochures (some of the best I’ve come across, ever) and a burning desire already to come back for longer and explore further, we set out to discover the city.
Bagrati Cathedral is Kutaisi’s main attraction. We took the cable car from Anjaparidze Square over the river to the Gabashvili Culture and Rest Park, with its merry-go-rounds and amusement rides, and then walked through the local neighbourhood to the cathedral.
It was a strange blend of weariness and hope. The older houses with their faded metalwork and electricity meters that looked like a throwback from early last century stood in resignation next to new villas, as if aware of the gentrification to come. 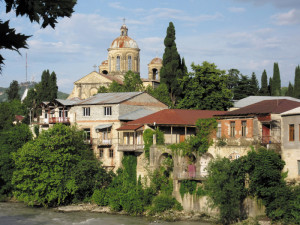 Built in the 10th century by Bagratt III, the cathedral was blown up by Ottoman invaders seven centuries later. Reconstruction took more than 50 years and finished in 2012. Towering above the city, the views from the grounds are breathtaking. There’s a bucolic laziness to it all with the bells still rung by hand and the local cows dining in its fields. Wending our way back to the centre via a narrow, steep path, we happened across the magnificent Chain Bridge and thought briefly of Budapest.
The opera house, the Royal district, the Golden Marquee all are worth visiting. The Colchis Fountain in the central square in front of the theatre is a sight to behold. But for me, the pick of all that has to be seen in the city is the Green Market.
It is here that tradition keeps its foothold. There’s the usual discounted tat common to markets everywhere. But at its heart is the food hall with mounds of sulguni, a smoked cheese; racks of hanging churchkhela, a sausage-shaped sweet delicacy made from walnuts and grape must that I mistook for candles;  and bottles of home-made wines and chacha, the local grape vodka.
We chatted with some of the women, sampled their wares and delighted in the fact that the only words we had in common were didi madloba (thank you very much) and yet we managed.
But the Kutaisi experience goes beyond the city. On Sunday, we went further afield, to Sataplia. It was here in 1933 that Petre Chabukiani discovered some 200 dinosaur footprints, all preserved and on display in what many call the original Jurassic Park.
It was a strange experience, walking through the forest and happening upon life-sized replicas of the beasts that had made those footprints, accompanied by the sound of buzzing bees. (Sataplia translates into Land of Honey.)
We toured the 350-metre-long cave with its kaleidoscopic array of natural colour and hiked up to the glass viewing platform that offers a panoramic view of the city lying seven kilometres in the distance and the entire Imereti region.
From there we went to the Prometheus Cave, 20 kilometres outside the city. The entire cave complex is over 25 kilometres long but not all is open to the public. The bit that is involves over 800 steps and a 1.5-kilometre pathway that takes you through a series of halls lit by coloured lights.
Here, instead of the accompanying sound of buzzing bees, we walked to the strains of classical music. When we got to the Prometheus Hall, we were treated to a light show synchronised with the haunting Georgian classic “Yellow Leaves”, composed by Gia Kancheli. It was quite the experience.
Above ground, it was time to see some of the monasteries Georgia is famous for.  Gelati Monastery, which sits 11 kilometres to the northeast of the city, was built at the beginning of the 12th century. With three churches and an academy, it was variously referred to as the “new Athens” and the “second Jerusalem”. Its academy was home to some of the most celebrated Georgian scientists, theologians and philosophers of the time.
Stepping inside is like going back in time. It takes a minute to realise that the murals on the walls, in all their faded glory, are untouched originals. Spectacular.
Motsameta Monastery is five kilometres from Gelati and dates back to the same time. Unlike Gelati, it’s not accessible by public transport but taxis are plentiful and inexpensive.  It sits on top of a cliff overlooking the Tskhaltsitela River and is even more magnificent in its remoteness.
It is here that two martyrs, brothers David and Konstantine Mkheidze, are entombed. It is said that if you crawl three times under their tomb, your prayer will be granted. Only time will tell.
Had we had more time, we’d have gone to Okatse Canyon with its famous one-kilometre hanging walkway or to the spa town of Tskaltubo, but we had food to eat and wine to drink and more of the city to see.
On Monday, our third and final day, we caught a marshrutka to Bat’umi. These minivans provide local transport between towns and cities. Although we drove alongside a railway track for most of the 180 or so kilometres, we never saw a train. Bat’umi is being billed as the new Dubai. The seaside resort echoes strains of Baku. All the major hotel chains have a presence on the promenade that stretches six kilometres along the edge of the Black Sea. Another city that warrants a return journey.
Tourism is in its infancy in Georgia. The country has little in the way of natural resources but is doing its best to develop what it has. The combination of great food, excellent wine and spectacular scenery with a cultural heritage that has survived the test of time is a winning one.
The selfish part of me wants to keep Kutaisi a secret, to save it from the tourist traffic that has besieged major European cities. But its pristine glory has a restorative effective that might just work some magic on other tired, beleaguered souls in search of simplicity.
1 GEL = 130 HUF
Accommodation starts from 10 GEL
at the Hostel Luxe
Taxi to town costs 3 GEL.
Marshrutka to Galati is 1 GEL.
Standard taxi to both monasteries 25 GEL.
Meals ran from 35 to 55 GEL
for two people with wine.
Marshrutka to Bat’umi 10 GEL one-way

Mary Murphy is a freelance writer limited by space. Read more on Georgia at www.stolenchild66.wordpress.com