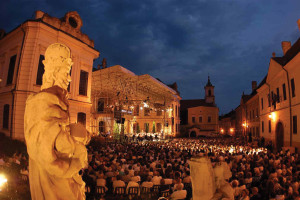 What would summer be without music festivals under a blue sky? They are as inseparable from the season as ice-cream and sun lotion. In our series we are taking a look at the most important Hungarian summer festivals. For people who love sophisticated music and would like classy entertainment against a historic backdrop of woodlands and meadows, we suggest opting for the VeszprémFest.

The small town of Veszprém is holding its cultural festival for the 13th time this year, from July 13 to 17. With a population of about 50,000, it lies about one and a half hours drive west from Budapest where the Bakony forest, the highlands around Lake Balaton and the Great Hungarian Plain meet.
Veszprém is known as the “city of queens”, a nickname that refers to a Bavarian princess from Passau more than 1000 years ago – Gizella, the wife of István, Hungary’s first Christian king. She founded the Veszprém diocese and decided that all future queens would be crowned there.
Due to its rich history and its beautiful baroque old town, Veszprém is a popular tourist destination. And the VeszprémFest attracts thousands more guests from all around Hungary to the university town each year.
Stronghold of world-class music
The festival is traditionally organised in front of the historical backdrop of the Archbishop’s Palace, one of the most beautiful baroque buildings in the city. Here, at Szentháromság Square in the heart of Veszprém Castle, each year they build a stage and a sound system that boasts the latest technology.
Festival director Zoltán Mészáros says no cost is too high when it comes to providing the necessary technical background to first-class performances. “The VeszprémFest shall be a stronghold of world-class music,” he says.
The musical offering contains artists from the genres world music, pop and jazz this year. There will be both Hungarian and international stars, some of them making their first appearance in this country. These include Cuban musicians Omara Portuondo and Diego El Cigala, Grammy-awarded jazz singer Gregory Porter, “British Queen of White Soul” Lisa Stansfield, British jazz pianist Jamie Cullum and US-American Nu-Jazz group Thievery Corporation.
A tip for wine-lovers
Besides the main program the “Rosé, Riesling and Jazz Days” are part of the attractions. This event, as should be obvious from its name, is a special for wine lovers and has been part of VeszprémFest since 2011.
Thirty vineyards from the wine regions Balaton, Somló and Pannonhalma present themselves at the “Rosé, Riesling and Jazz Days”.
This is complemented with a colourful range of gastronomic offers, and the wine tasting and feasting is accompanied by an additional 30 music acts, the majority from the Hungarian jazz scene. As opposed to the program on the main stage, the entry to this part of the program is free.

Where:
Veszprém, in the historic castle district