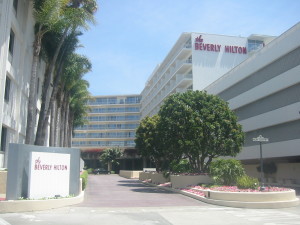 Hilton Budapest is a city landmark with its uninterrupted and up-close Danube River views, but in the bigger picture it is just one of Hilton Hotels & Resorts’ more than 550 establishments in nearly 80 countries across six continents.

Still, of those 550-plus there is a solid chance that Hilton Budapest is the only one situated in the remains of a 13th-century Dominican church with the Baroque façade of a 16th-century Jesuit College. And for good measure the hotel is in the heart of the Castle District, a UNESCO World Heritage Site.
Hilton Hotels & Resorts, whose headquarters are in Tysons Corner, Virginia, United States, is an international chain of full-service establishments and the flagship brand of its parent company, Hilton Worldwide. The latter, based in McLean, Virginia, US, is one of the world’s largest and fastest growing hospitality companies, with more than 4660 hotels, resorts and timeshare properties comprising more than 765,000 rooms in 102 countries and territories.
Apart from the flagship there are another 12 distinct brands in the portfolio, namely Waldorf Astoria, Conrad, Canopy, Curio, DoubleTree, Embassy Suites, Hilton Garden Inn, Hampton, Tru, Homewood Suites, Home2 Suites and Hilton Grand Vacations.
In other words, a property for all budgets and occasions, and there is continual growth. Just this month Hilton at Resorts World Bimini, in the Bahamas, completed its second-phase opening, after first opening last year, and a completely new opening was the 600-room Hilton Cleveland Downtown in the US state of Ohio.
It all began in 1919 when Conrad Hilton bought his first property, the 40-room Mobley Hotel, in Cisco, Texas. The first hotel to bear the Hilton name was the Dallas Hilton, a high-rise that opened in the Texan city in 1925. Conrad Hilton’s aim was to operate the best hotel in the Lone Star state. 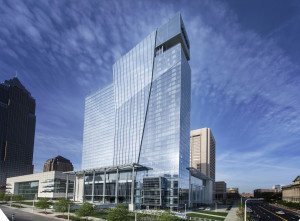 The Hilton
in downtown
Cleveland

There have been many milestones over the years. In 1949 at the Caribe Hilton Hotel’s Beachcomber Bar in San Juan, Puerto Rico, Ramon “Monchito” Marrero created the Piña Colada. In 1954 Hilton hotels bought the Statler Hotel chain, making it the largest hospitality company in the world. The company also closed a deal with oilman Glenn H. McCarthy whereby his Shamrock Hotel property (renamed the Shamrock Hilton a year later) and business interests became part of the Hilton chain.
Hilton Istanbul Bosphorus (1955) was built as the first Hilton hotel in Europe and is the longest-serving Hilton outside the US. It appeared in the James Bond film “From Russia with Love” (1963).
The Conrad Hilton Hotel in Chicago figured prominently in the 1968 Democratic Convention riots that occurred across the street in Grant Park. The hotel’s doors were locked for the first time in its history. The hotel suffered minor damage as the street-level windows gave way under the weight of hundreds of protesters during the ensuing riot.
John Lennon and Yoko Ono held their first Bed-In for Peace, in Room 902 at the Amsterdam Hilton from March 25 to 31, 1969. This room has become a popular tourist destination. In two other incidents at this hotel, in 1991 Dutch drug kingpin Klaas Bruinsma was assassinated in front of the building, and in 2001 Dutch artist Herman Brood committed suicide by jumping from the roof.
On April 3, 1973 Martin Cooper made the world’s first handheld cellular phone call in public when he called Joel S. Engel at the New York Hilton with a Motorola DynaTAC phone weighing almost a kilogramme.
With construction on the Beirut Hilton finished, the hotel was scheduled to open on April 14, 1975 but the Lebanese Civil War erupted exactly one day before the April 13 Grand Opening date. The hotel never opened and was severely damaged during the war. The building was demolished in the late 1990s. However, a different hotel was established later nearby under the name Hilton Beirut Grand Habtoor. 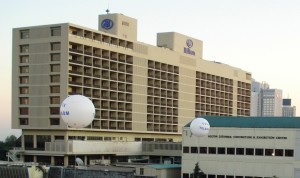 On February 13, 1978 the Sydney Hilton Hotel was the site of one of the few terrorist incidents on Australian soil, when a bomb blast killed two council workers and a policeman.
The Hilton Nicosia in Nicosia, Cyprus, was the scene of the assassination of Youssef Sebai, an Egyptian newspaper editor and friend of Egyptian President Anwar El Sadat, on February 19, 1978.
In 2009 the company opened Canada’s tallest hotel – at 58 stories – in Niagara Falls, Ontario. In July 2012 tightrope walker Jay Cochrane walked from the Skylon Tower to the top of this Hilton.
In 2010 Hilton Worldwide announced a name change of the Hilton Hotels brand to Hilton Hotels & Resorts.
On February 11, 2012, multi-Grammy Award-winning singer Whitney Houston drowned in the bathtub of Room 434 at the Beverly Hilton. In March 2013 Hilton announced that it would enter Burma with the construction of a 300-room hotel in the capital, Yangon.
Early 2016 saw the launching of Tru by Hilton, to fill a void in the mid-scale category in the US and Canada.
Hilton HHonors is a guest loyalty program with more than 52 million members worldwide. HHonors has partnerships with airlines, credit cards and retailers, offering multiple ways to earn reward points on everyday purchases. Gold and diamond members get complimentary room upgrades. A combination of points and money can be used to book rooms.