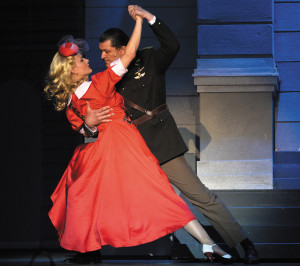 “Evita” opens at the end of the first lady’s life, with a candlelit religious procession and choral music as the people of Argentina drape themselves over her coffin in sorrow. “Requiem for Evita” sees the masses grieving for their “Santa Evita” as though she is a goddess, a saintly figure plucked from the heavens for her short time on Earth.

The musical moves full circle as the drama takes place in a series of flashbacks with Ché, the narrator casting a more than cynical eye over events. Even her funeral is described as “Oh, what a circus” as mass hysteria takes a stranglehold of Argentina.
Péter Sándor’s Ché is abrasive and angry, darting around the stage with wild intensity. He represents the dark side. In many accounts Evita is portrayed as a power-hungry social climber who stops at nothing to get to the top. In others she is a saint. This multi-faceted nature of her character gives real depth to the production.
Eva Perón is performed by Csilla Radnay, who is at her best in her intense solo roles in this production. The classic “Don’t Cry for Me, Argentina” is the ongoing refrain throughout the musical, like an operatic leitmotif, forever memorable and haunting whether sung in a blaze of glory by Evita from the balcony or softly in her weakest dying days.
Evita isn’t just a sweet giving heroine, at times we see the anti-heroine, the fame-hungry girl she started out as in small-town Argentina burning for the big lights of Buenos Aires. She is a complex mix and Radnay performs with true grace and dynamism, at times portraying Evita as a petulant diva, others a gentle and selfless woman who fights for the rights of ordinary people.
With the original music by Andrew Lloyd Webber and lyrics by Tim Rice, “Evita” was hugely successful in the West End and became a film with Madonna and Antonio Banderas in 1996. 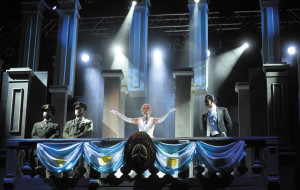 This version in the Open-Air Theatre is directed by Tamás Juronics, with Ferenc Koczka leading the orchestra through the ebbing and flowing river of musical styles. The score often reflects Latin America, interspersed with gentle choral interludes and strong ballads and crashingly loud rock; as varied and diverse as Evita herself.
The Open-Air Stage is designed for a musical of this capacity; it would be a pity if a spectacle as epic as this one were confined to a theatre. The staging, the inventive use of the scenery and the sheer volume does this echoing stage justice.
One of the most iconic scenes in the musical is after Perón is elected as president in 1946 and he addresses the crowd from the balcony of the Casa Rosada, and Evita captivates the masses herself with her own heartfelt polemic.
This is portrayed in the musical with a beautiful rendition of “Don’t Cry for Me, Argentina”,  where Evita speaks of finding her path in life; she initially wanted fame and glory as an actress in Buenos Aires but now she has discovered her real place, which is to be true to the people of her beloved country.
Yet there are darker undertones running throughout, suggested in Ché’s songs about money laundering mixed in with Evita’s charity work. As a political figure towards the end of her life she was particularly controversial, whether driven by the pain she was suffering as cancer cruelly gripped her body or by mere voracious ambition. By the early 1950s, huge faultlines began to appear in the Perónist government, not aided by Evita’s incendiary speeches.
Ché’s songs are all delivered in a loud angry rock style, blasting above the orchestra and chorus. At times the chorus, sound and orchestra are all too loud combined, leaving the three leading performers with a lot of shouting to do.
Ché as a character underlines the fact that Evita was not seen favourably by all; she was from impoverished provincial Argentina and scorned by the upper classes. The Argentinian army refused to take her seriously as a political figure, and her “Rainbow Tour” of Europe provoked mixed reactions, with Italy comparing Juan Perón to Mussolini. 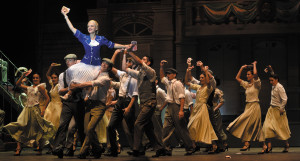 Juan Perón is performed with admirable style by Géza Egyházi, all control and fierce loyalty to his Evita. Again, his character is complex. There are accounts of his medical treatment of Evita in her dying years, which are omitted from Lloyd Webber’s musical.
Daniel Nijensohn, a neurosurgeon at Yale University Medical School, believes after accounts detailed by Evita’s surgeon that she was given a pre-frontal lobotomy in 1952. Whether these allegations are true or fabrication, it adds a darker twist to the many mysteries surrounding Evita, and the more intrigue created, the more fascinating and colourful her story becomes.
“Evita” as a musical has truly stood the test of time since its early life in 1978 in London’s West End, maybe because the storyline has such substance. Here was a critical time in Argentina’s history with a glamorous female character at its epicentre; so much stronger than a musical that is all glitz and glamour but based on very little such as “Cats” or “Starlight Express”, and best not to even think about Joseph and his multicoloured coat.
The lyrics of Tim Rice run deep throughout “Evita” like passionate poetry, and although this version is performed in the Hungarian language, it still manages to retain much of the original meaning. Some critics have likened Lloyd Webber’s music to Puccini, which is an excessively bold statement to make, but there is no doubt he has a gift for taking a political subject and turning it into a work of enduring magnificence.
As the sky darkens over the Open-Air Theatre, so the second act becomes much more meaningful and sad. Evita is rapidly dying of cancer aged only 33, an explosive life brutally cut short. As her achievements float with a dreamlike quality before her, the dying Evita in “Lament” asks for forgiveness, as though she is paying the price for choosing fame instead of a long life.
She dies young and beautiful as though a heroine at the hands of a great writer; it would be no good if she lived a long, happy life so she is killed off for dramatic intensity. As in the operatic world, Evita’s stage death is a melting away as graceful as could be, her intense vitality and beauty finally extinguished.