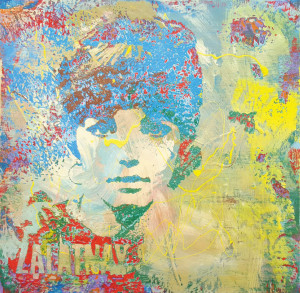 Vladimir Potapov’s newly created body of work is an outcome of research into Hungary’s cultural history, putting forth a range of well-known figures from the Hungarian pop music industry of the past.

Culture as an area of political manipulation during the Cold War acquired a special significance. Cultural workers – in particular representatives of pop music – became instruments of ideological propaganda. Their songs were broadcast on radios, promising people “a better life”. In 1969 Larisa Mondrus, a Soviet soprano singer, refused to implement ideologically sustained civil subjects imposed by the Ministry of Culture. In 1973 she emigrated to West Germany.
The clutch of the ruling political party was also apparent in the field of literature. “Doctor Zhivago”, written by Boris Pasternak, was published with the financial support of the US Central Intelligence Agency as a part of the propaganda war. The novel earned him the Nobel Prize for Literature, for which he was persecuted and harassed by the Soviet government.
The most famous Hungarian spy, István Belovai, admitted that during his work at the KGB some artists of the Hungarian pop industry actively co-operated with both the CIA and the KGB. Cultural figures often found themselves facing a difficult choice: with whom to collaborate? It was a decision having direct effect on their future careers and security.
The key question of Vladimir Potapov’s exhibition is: who of the presented artists worked with the CIA and who with the KGB? The show presents 10 works that take the visual layout and decoration of Hungarian pop vinyl records as a base. Potapov scratches off layers of paint to reveal the once iconic Hungarian singers and bands from the palimpsest.
As he puts it: “When you scratch the paint, it’s like a trip back in time – it leads you to the actualisation of the deep layers of paint which are integrated into the main surface. For me, this process of immersion is in our shared memory.”