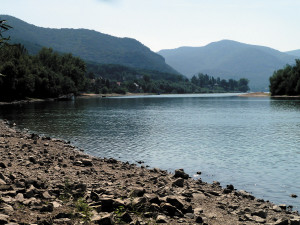 There are many ways to achieve seeing the Danube, and not necessarily by boat. Alex Stemp often chooses to do so by bicycle.

The Danube, as it is known in English, or Duna, as it is known in Hungarian, needs no real introduction as this celebrated river ventures 2860 kilometres from Germany’s Black Forest to the Black Sea – with Budapest somewhere in between and one of the river’s most prominent features. The Hungarian capital and the river appear so often together in postcards, tourist glossies, general media coverage, and past and present documentaries.
Exploring the Danube at any time of year is a pleasure, as each season brings its own unique atmosphere, whether it be spring when the riverside landscape blooms, summer when it is time for the great outdoors, leading to the contrasting scenery of autumn, or even winter, when the crowds are few, the leaves are down and the views are even more spectacular. 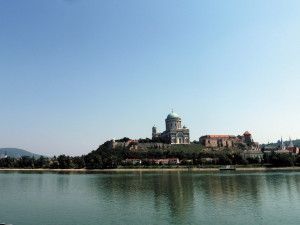 The Basilica in Esztergom

Many times have I ventured by bike from Budapest to the famous Duna Bend (Dunakanyar) and then the border at Esztergom where Stúrovo lies across the Mária Veléria Bridge in Slovakia (or Párkány, as Stúrovo is known by Hungarians).
For those new to Budapest and not yet familiar, proceed anywhere towards the city centre. From there it is easy to orientate yourself around the River Danube area with the bridges and walkways either side. For immediate and spectacular views, make your way to the hillier Buda-side Castle District.
In particular there is the exquisite Halászbástya (Fisherman’s Bastion) lookout tower that hosts splendid scenery over the Danube to the spectacular and architecturally famed Országház/House of Parliament on the opposite, and more commercial, Pest side.
In between Buda and Pest is Margaret Island, a sanctuary of calm where one can sit, or cycle, and watch the various boats and ships cruise past.
As for the bridges, they are all architecturally grand, as well as uniquely different from one another. The grandiose Széchenyi Lánchid, the Chain Bridge, perched with ornamental lions on either end, is as much a wonder as the romantic atmosphere of Margaret Bridge. If time is short, it is sufficient to walk the circle around these two bridges via both the Buda and Pest sides, thus capturing the remarkable atmosphere of the Danube as well as central Budapest. About an hour’s walking time is required, and much less by bike, of course.
For those with more time, our cycling sortie takes us 20 kilometres upstream along the north Buda riverside to the quaint Szentendre, or Saint Andrew. This enchanting small town has a calm provincial atmosphere and is a mecca for artists. Should camping be your style, there is the wonderful Pap-Sziget campsite a little further upstream. 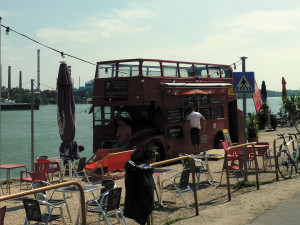 The double-decker buffet
in south Budapest

Proceeding further on this popular riverside route, we come to the medieval castle town of Visegrád, with Nagymaros directly opposite. These are the two main towns of the Duna Bend and they are connected by an all-year-round ferry.
Visegrád castle requires climbing a fairly steep and demanding hill but this is well rewarded by the splendid view. All of which has inspired many artists and composers alike, as well as outdoor enthusiasts such as myself.
Beyond Visegrád is the less touristy route, and a notable difference in the riverside landscape as it becomes more rugged and I pause to take in the splendour of the Dömös rocky peaks with my daughter Judy.
Finally, after topping 65 kilometres along the easy-going riverside bicycle lane, I arrive at the royal town of Esztergom with the highly symbolic Basilica, usually visible way before arriving. Esztergom is truly a Danubian place and really has a spiritual presence. Pope John Paul II visited in 1990. From the Basilica, a fine panorama of the Danube with Slovakia on the other side awaits; one can see into Stúrovo/Párkány and vast open spaces beyond.
To find the border crossing, head towards the Mária Valéria Friendship Bridge, by any means of transport, and simply walk across this fine, elegant bridge to Slovakia. It is worth noting that to get the best views of the Basilica with an outstanding river setting, take a walk along the Slovak shore-line.
From this most southern point of Slovakia one can continue 150 kilometres westwards along the Duna cycle lane to Bratislava. Or if returning to Budapest on the Hungarian side of the Danube, do as I did and return 10 kilometres to the tiny Pilismarót harbour, from where it is a 10-minute ferry crossing to the far lesser known Szob town and shoreline.
As the tugboat saunters either way in its westerly and easterly directions, it defines a virtual border line: directly north is Slovakia and south is Hungary. The vessel is smaller and lighter than most others used on the river, as there are far fewer tourists and traffic. Mainly locals use this service, to and from the remote border town and riverside area.
Lesser known Szob has a very sleepy atmosphere. The unruffled Duna scenery, without the crowds, along the number 12 road and cycle lane is at its wildest and scenic best. I then resume my incredibly quiet cycling with the downstream towards the more built-up but lovely Nagymaros with, once again, Visegrád castle, now on the other side, in plain view.
Continuing 15 kilometres southwards from Nagymaros is the riverside town of Vác, and like Esztergom there is a basilica: Vác has a scenic setting and is very much worth a visit before taking the ferry to Saint Andrew Island and contining southwards to Horány, another harbour that faces Dunakeszi on the mainland.
Once again, this immediate area with its wondrous riverside scenery is a paradise for swimmers, walkers and cyclists alike, and very much worth visiting as this shoreline is not so far away from Budapest.
Finally I return to the capital along the Pest riverside cycle lane to the city centre, with the many outdoor and riverside bars and restaurants that are always in full flow in summer. 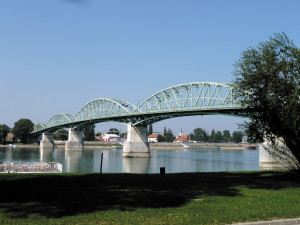 To round this off, I wish to take you, Dear Reader, somewhere unexpected but very special. Well… special to me because I am English and this came to me as much of a surprise!
To achieve this, we must return to the Buda side and cycle 12 kilometres south to the lesser known riverside town of Budafok. Facing opposite the industrial atmosphere of northern Csepel Island with the tall, imposing chimneys of the Csepel Művek works, this is all very much off the tourist trail.
However, continuing along this cycle lane, with chimneys still in view, comes the unexpected as on this particular shoreline two original English red double-decker buses suddenly appear. Here are a buffet, a welcome rest and some funky tunes for the astonished cyclist. I park my bike and make my way to the friendly staff, who immediately pick up on my Englishness as I deliver my order in distorted Hungarian. Still, they then proceed to serve me pancakes and ginger beer.
At the buses I end this tour, knowing I will return to recapture the mystery and magic of the wondrous Duna/Danube as it continues its timeless flow.