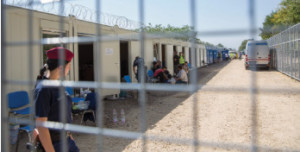 Hungary’s authorities “summarily force” migrants back to Serbia at the southern border, “in some cases with cruel and violent treatment”, without considering their claims for protection, the international Human Rights Watch says in a report. The governing party called the report questionable and said the organisation is biased due to its clear ties to US businessman George Soros.

According to the report, the authorities “apply a legal fiction” to people in the transit zones along the border, and claim that “persons in the zone have not yet ‘entered’ Hungary”. Human Rights Watch established that while people belonging to some vulnerable groups are transferred to open facilities, most asylum applications submitted by single men have been promptly rejected since May this year.
“People who cross into Hungary without permission, including women and children, have been viciously beaten and forced back across the border,” said Lydia Gall, the organisation’s regional expert.
Transit zones had a restricted capacity, which meant that “hundreds of migrants and asylum seekers, including women and children, are stuck in no-man’s land in very poor conditions waiting to enter” those facilities. Migrants attempting to cross the border bypassing the transit zones are “forced back” to Serbia, “often violently, without any consideration of their protection needs”, the report said.
Migrants interviewed by Human Rights Watch reported that the authorities had treated them brutally including beating, using gas spray and setting dogs on them, or “forcing them through small openings in the razor wire fence, causing further injuries”.
Authors of the report urged the Hungarian state to investigate the incidents and identify perpetrators, whether they are police or soldiers, or members of paramilitary organisations.
Lajos Kósa, head of the ruling Fidesz party’s parliamentary group, said the report’s reliability is “completely questionable”, as there is a “clear financial connection between the HRW and George Soros”. He said Human Rights Watch is “completely pro-immigration and an extremely biased organisation”.
The Ministry for the Interior said that HRW’s interpretation of asylum rules is mistaken. The ministry said it is shocked to see that “HRW expects the authorities to ignore laws passed by Hungarian Parliament that were enacted in line with European norms”. The Hungarian authorities ensure legal entry into Hungary and a legitimate submission of asylum applications, the ministry insisted.
Its statement said that while the police have handled nearly 18,000 illegal entrants this year, only eight of them have filed “complaints suggesting police violence”, adding that police investigations found all eight complaints unfounded. Migrants are not harassed at Hungary’s borders and those in need are ensured a humanitarian treatment, but they are also expected to observe the laws of Hungary and the European Union, the ministry said.
The Hungarian Helsinki Committee has also criticised the treatment refugees receive in Hungary. The organisation urged the Hungarian state to “do its duty” and investigate who is behind the attacks targeting migrants, “whether they are police, soldiers, or paramilitary vigilantes in gangs”.

Founded in 1978, Human Rights Watch (HRW) is an international non-governmental organisation that conducts research and advocacy on human rights. HRW headquarters are in New York City with offices in several cities of the world. Financier and philanthropist George Soros of the Open Society Foundation announced in 2010 his intention to grant USD 100 million to HRW over 10 years to help expand its efforts internationally. The donation increased Human Rights Watch’s operating staff of 300 by 120 people. The donation was the largest in the organisation’s history