After taking the lead in the first corner Mercedes’ Lewis Hamilton stayed ahead of the pack throughout the race and eventually claimed victory in the 31st Formula One Hungarian Grand Prix at Hungaroring on Sunday. Nico Rosberg of the same team came second and Red Bull’s Daniel Ricciardo was third. With his fifth win in Hungary, Hamilton passed the record of Michael Schumacher and has become the king of the Hungaroring. Minister of Foreign Affairs and Trade Péter Szijjártó said it is in Hungary’s national economic interest that F1 should be brought to the Hungaroring every year, and the government is setting aside HUF 5 billion in the 2017 budget to revamp the circuit. “The asphalt has already been changed and new curbs and drainage have been added,” he said. “Next year we want to renovate the main building or build a new one as well as renovating the grandstands on the main straight and next to the track.” In this respect the circuit lags behind others, he said. 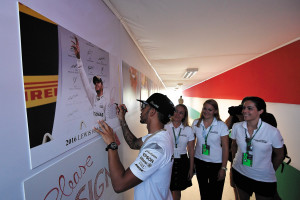 Hungarian authorities have assessed security in light of the Nice terrorist attack and Munich shootings and concluded that there are no direct threats to internal security, government security advisor György Bakondi said on Sunday, adding that there is no need to raise the terror alert level. At the same time, the authorities are “working intensively with international organisations”, he said. Migration pressure on the Hungary-Serbia border is “intense”, Bakondi said on public radio, and although the so-called Balkan route has been shut down, people smugglers are looking for new routes from two directions, from Turkey and Bulgaria, and from Macedonia. 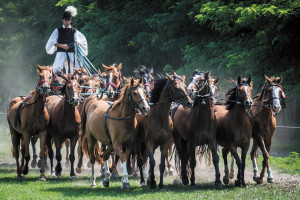 Bavarian police have told Hungary’s chief consulate in Munich that one of the victims in a shooting rampage near and inside a shopping centre in the city last Friday was a 15-year-old male with Hungarian citizenship. Eight other people were killed and more than 20 injured by a German-Iranian 18-year-old before he shot himself dead. Hungarian President János Áder and Minister of Foreign Affairs and Trade Peter Szijjártó sent their condolences, saying Hungary stands by Germany in these difficult hours. “This atrocious attack has confirmed that we must take more seriously than ever efforts to protect the safety of European citizens,” Szijjártó said. 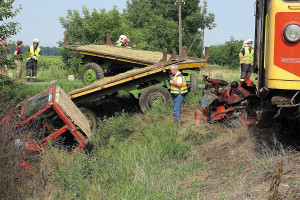 Tractor collides with train in Csongrád County. One fatality

Workforce shortages have created serious problems at the fresh goods distribution centre of Tesco’s Hungarian operations, daily Magyar Idők said on Saturday. The paper said Tesco has daily problems with deliveries of products to its stores, resulting in inventory shortfalls of staple goods lasting for several days and erratic service in Budapest and other cities. Several employees have reportedly resigned recently at the central distribution warehouse, just outside the capital, complaining about work overload and low pay. The manager of a large Tesco hypermarket in Budapest, who did not wish to be named, told the paper the company could decide at the end of summer to cut opening hours at certain stores or withdraw some products from sale. When contacted by Magyar Idok, Tesco Global Áruházak attributed the problems to a temporary seasonal inventory shortfall, adding that they are working on the problem. 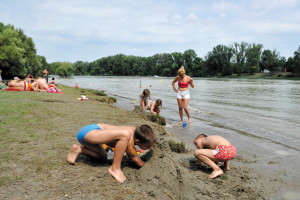 New beach opens on the Danube in Szentendre

Hungarian car-sharing company BeeRides has won the Ford Mobility Tour startup contest in Budapest. BeeRides competed against other startups from the Visegrád Group of Hungary, the Czech Republic, Poland and Slovakia. BeeRides will participate at the 24-hour AppLink Developer Challenge in Berlin in September. The company lets car owners earn money when they leave their vehicle at the airport while travelling. 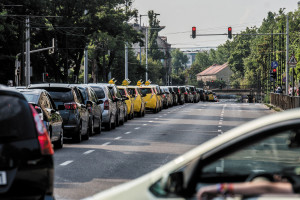 Uber demonstrates in Budapest one day before shutting down service

Hungary has sent a new police unit of 25 to help patrol the Macedonian-Greek border. They will serve at the post for a month, the head of Hungary’s national police, Károly Papp, said on Monday. This is the sixth contingent from Hungary to go to Macedonia, following 78 police in the previous five missions. Over the past 12 months about 270 Hungarian police have served on foreign missions in 10 countries including Slovenia, Serbia, Greece and Macedonia, Papp said. 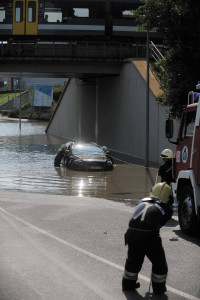 The Visegrád Group must expand to include other countries in the region as well as countries from northern Europe if it is to gain real influence within the European Union, a former Hungarian foreign minister says. Géza Jeszenszky, who served in the government of József Antal between 1990 and 1994, told public television news channel M1 that the grouping of the Czech Republic, Poland, Hungary and Slovakia could be enhanced by countries such as Croatia, Slovenia, Romania, Bulgaria and northern European nations that are “struggling with similar problems”. In this way, the Visegrád Group would become a force to be reckoned with, he said, commenting on the recent V4 summit in Warsaw. At the same time, he gave warning that some countries could create a new kind of eastern bloc within the EU.

National population decline slowed in January-May to 2.7 percent compared with the same period last year, the Central Statistical Office (KSH) has reported. The figures show there were 36,100 births in the first five months of 2016. According to leap day-adjusted data, the number of births was down 2.4 percent against January-May 2015. The number of deaths was 53,054, down 6967, or 12 percent, according to leap day-adjusted data, KSH said.