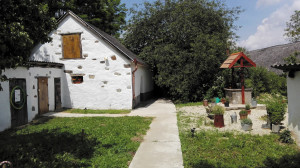 Back in the early 1900s, a Swiss baker and confectioner by the name of Frederick Belmont emigrated to England. He opened his first tea rooms in Harrogate, Yorkshire, in 1919. He called it Betty’s. No one knows who Betty was, but today the name Betty’s Tea Rooms is synonymous with craft baking and the quintessential English Afternoon Tea. It’s famous all over the world, with a mail order business that has customers as far away as Tokyo.

Afternoon tea was the furthest thing on my mind on a sunny August Balaton Sunday, and when my friends suggested we go visit their local tea rooms, I was a tad sceptical. The last thing I’d expect to find in the bucolic Hungarian village of Zalaszántó, or indeed anywhere in the Hungarian countryside, is an English tea room. While the topography might have a few Yorkshire nuances, I simply couldn’t imagine sipping Earl Grey from a china cup while eating homemade scones topped with strawberry jam and fresh cream. But an hour later, that’s exactly what I was doing.
Back in 2007, Brighton-born Neil Stevens and Mancunian Ken Jones crossed the Austrian border to teach English in the Hungarian town of Mosonmagyaróvár. Stevens had worked as a speech therapist and Jones as a printer. But they reinvented themselves and went in search of an alternative life.
In 2011, they ventured deeper into the country and ended up in Zalaszántó, determined to live a sustainable, self-sufficient lifestyle, growing their own vegetables, raising their various animals and living off the land. This mastered, they looked for a new challenge.
Neil’s grandmother, Dora, was a housekeeper. When she passed away, he inherited her collection of recipes. Ken’s grandmother, Florrie, used to work at Betty’s Tea Rooms in Harrogate. He, too, inherited her recipes. Both men like to bake, make their own jams and mix their own teas. Both like to chat, to meet new people, to live a stress-free life. So, they thought, why not open an English tea room and call it Florridora’s Pantry.
They poured their first cuppa in December 2015. A write-up in the popular Hungarian magazine Meglepetés got the word out and now they open 11am-5pm five days a week (closed Mondays and Tuesdays) in summer and every weekend, year-round, with a largely Hungarian clientele.
Their little tea museum is educational. The old-fashioned English games set up in the garden, such as hoops and hopscotch, give the kids something to do. And the 16-seat tea room with its backdrop of  Gatsby-era music is delighful. 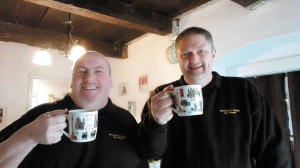 They’re reluctant to expand, although the demand is there; the small numbers make for a convivial atmosphere and give them time to enjoy chatting with their guests. They really have this alternative lifestyle thing nailed.
The tea menu is extensive and includes such gems as hölgyek teája (ladies tea), a cup of which will soothe those hot flushes; emésztést segítő keveréke (digestive blend), which will sort your indigestion; and csípõs fájdalomcsillapító (spicy pain relief), which will cure those aches and pains.
The cake selection changes regularly (I can highly recommend the Rocky Road). Everything is made fresh on the day from their own produce and it’s all very reasonably priced.
This year, the lads are moving into the Christmas market with aplomb. If you’re quick, you can order their homemade Christmas cakes (from one-portion cakes to 22-centimetre family numbers) and Christmas puddings. They’re slow-cooked over a wood stove and so need weeks of preparation. I’m sure if you ask nicely, they might even mail it to you. But then you’d miss out on the experience. Better to go pick it up yourself and sample the delights of this unlikely, but lovely, feature of the Hungarian countryside.

Mary Murphy is a freelance writer and public speaker who has rediscovered the joys of afternoon tea. Read more at www.stolenchild66.wordpress.com