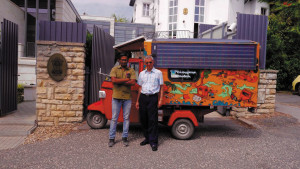 Ambassador Rahul Chhabra (right) outside the Indian Embassy in Budapest with Naveen Rabelli, the inventor, builder and driver of his electric tuk-tuk

“You would not be aiming to break any speed record with this?” I ask the man putting his rucksack into his rickshaw. “Speed record I would not break, yet I might make history,” he answers with a smile.

In the past few years we have gotten used to seeing some of the three-wheeler bicycle taxis and auto rickshaws in the centre of Budapest that remind one of the rickshaws in India and Thailand. Yet the car, or rather the creation, I am looking at is something so special that one has to examine it in detail.
We are standing in the carpark outside the Indian Embassy’s Budapest compound. If one inspects the car, it looks like an elongated rickshaw with a caravan built on top. The sides are hand-painted, underlining the vital message: “India to UK in solar Tuk-Tuk, 0 emission, 1 Solar Tuk-Tuk, 10 countries, 10.000 km.”
The smiling man is the young Indian innovator and adventurer Naveen Rabelli. He spent a few days in Budapest recently with his solar-driven tuk-tuk on his journey from India to London. I asked Rabelli about his project.

Was the tuk-tuk your idea, and if so, when did it come about?

The idea is from 2012. At that time I worked in Australia as an automotive engineer. In 2011, for holidays, I was visiting my hometown Bangalore in India. After living and working in Australia it no longer seemed to be so obvious and so natural that India is polluting the air so heavily by its rickshaws, or as most people abroad call them by the name tuk-tuks. It gave an extra angle to the question that since I was working in the car industry, I was part of the business that is so profoundly polluting the air. I became more and more obsessed with the idea that somebody has to take a step and stand up against global pollution. Somebody should bring a message to the world that society should be self-sustainable and based on renewable energy. I started asking myself why this somebody should not be me? I also felt that it should be an aim to inspire the young generation of the world to realise their dreams, that nothing is impossible. 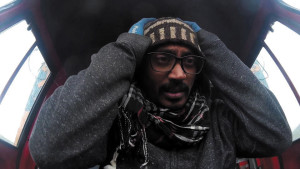 During the trip sometimes it is cold, sometimes hot, most of the time it is lonely. But the voyage far over-compensates all ills

From the original idea, how long did it take you to take off with your car?

After my holiday in India I quit my job in Australia. I took off driving through Australia, New Zealand and South-East Asia. I bought and hired cars on the way. During my journey I was more and more unhappy about the pollution I caused with the cars I was driving. When I arrived in India I got a job with the Indian electric car maker company Mahindra Reva. The corporation was producing 4000 cars a year. At that time they were one of the biggest electric car makers in the world. Ever since my childhood it was one of my dreams to go to London. As I was working in the factory I was thinking more and more about the journey to London and about going with an electric car that I would build myself. Meanwhile a friend from Argentina was visiting me in Bangalore. I talked to him about the trip I was dreaming about. He asked me: If you are going to build your own car, why don’t you make a tuk-tuk? That was what gave me the final idea about the shape of the car I wanted to travel thousands of kilometres in without using petrol. From the outset in 2012 it took me three years to build the vehicle called Tejas, which could be translated as solar “radiance”.  The venture features a zero emission three-wheeler auto rickshaw running on solar power and battery. I thought that the idea to house my solar car in the body of a rickshaw – that is so well known for its high pollution – is good because my aim is to draw attention to the renewable clean energy and self-sustainable society.

When did you take off from India? 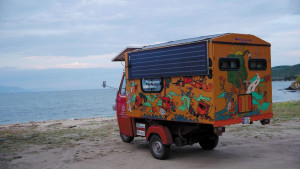 Step outside: the bathroom in front is large and very attractive

I have been on the road for six months now, as I took off from Hyderabad, India, on February 8. So far I have already driven for more than 11,000 kilometres through Dubai, Iran, Turkey, Greece, Bulgaria and Serbia before reaching Hungary. Here in Budapest I visited the Embassy of India and met His Excellency the Ambassador Rahul Chhabra.

Has your tuk-tuk had any major breakdowns so far?

I had two setbacks but since I was the one who built the car and I know electric cars, I could fix the problems.

For decades, people in the West have been reading about Iran only as a terrorist fortress. What were your impressions of the Iranian people?

All countries were different and all challenging, Iran in particular. The Iranians are extremely friendly and very helpful people. It was interesting that later in Europe, as I met refugees I met some who came from countries where there are no wars. They were not political, not even economic refugees; in fact it was obvious that they had money. So I asked them: yours is a beautiful country not at war, why did you leave your homeland? They said: everybody is going somewhere. According to the news that reaches us, there is more money in the West, so we would like to go to Germany. They also said: since we cannot get across the borders legally we would keep trying illegally until we would get where we wanted to go.

What other experiences did you have with the migrants as you were travelling on some of the roads they are using?

Seeing some real refugees, I felt ashamed of driving in my little car that seemed such an incredible luxury compared to their standards. In Serbia I picked up some hitch-hikers who turned out to be migrants. They said they were from Syria but most of them – including people obviously from Africa – also stated that they were Syrians. It is difficult to say why but I felt very uncomfortable when these people were in the car. Somehow I did not feel safe. As we were coming to a slope, the car slowed down so much that it almost stopped. The three of us were too heavy for it so I had to ask them to get out. As I continued my journey the Serbian police stopped me. They took me to the police station. They interrogated me for quite a while, asking where I left the people I picked up earlier. They were convinced that I was a smuggler. This was the part of the journey that I did not like; I felt that I was in danger.

What other unexpected events have happened?

In Greece I had an accident and I broke my arm. 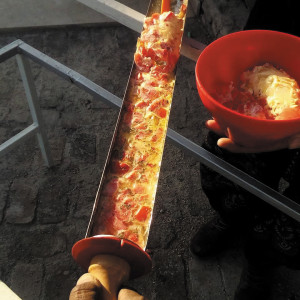 What do you eat? Do you cook for yourself?

I eat what people give me or if they invite me but I also cook for myself. What is more, in Belgrade I even cooked Indian food for quite a lot of people. It was such a success that people even offered me money for it.

You travel and stay in your tuk-tuk but where do you wash?

When I pass a river, a pond, a lake or the sea, then it is easy. If I am invited to somebody’s home, then I can have a shower or a bath if people tell me I am smelly. Part of the journey is networking. When I arrive somewhere I am working on building contacts for my next stop or destination. This is particularly important when I go to big towns, so that I can park in somebody’s garden or courtyard so the car does not get broken into or stolen.

How many solar panels/batteries do you have?

I have six solar panels, three lithium batteries and two with acid.

How far can you go with one battery?

One battery would take me 26 kilometres. My top speed is 60km. The average speed is 45km. Usually I do 80 kilometres a day. The most I have done in a day was 180 kilometres.

What happens if the sun is not shining for a week?

I get 30% of my power from solar energy and 70% from electricity, so I can charge up my batteries.

How long did it take you to plan your itinerary?

Four months, partly because of the visas and special permits, the insurance and the registrations. But my date of departure was delayed because in India a tuk-tuk hit me.

Did you work out how much time you would be spending in each country?

I worked out the number of days for each country and for the whole trip all together. But the schedule gets upset if something unexpected is happening or not happening, like if there is no sunshine and it rains for days.

How can you finance such a long trip?

Obviously it does help that I do not have to spend money on petrol. But I still need sponsors like Telangana Tourism. And as I have already indicated, networking, meeting good-hearted people helps a lot, as I can stay and eat with friends.

Are you planning to go back the same way you came?

It is too early to say because I still have a long way ahead of me. If I were to go back and take the tuk-tuk by boat that would cost me USD 3000 and that is too much. It is also possible that I might stay in Europe if I got a job.

You have spent a few days in Hungary. How do you see us and our country?

I found Hungary an amazing country and I am not saying that because I am talking to a Hungarian. The architecture is so very different from the one I saw in Serbia. It is so nice to see so many people on bicycles. I have not even left Hungary but the people were so kind and helpful to me that I am missing Hungary already. Perhaps one day I will come back and visit the people whom I met and they became my friends. It also amazes me how much the people I met in Hungary know about India and how much interest and love they feel towards my home country.

You are testing not only the strength of solar energy but the power of goodwill and your own endurance. When we Christians are on a long journey we pray to Saint Christopher. You are a Hindu; who is your god to look after you on a journey?

My god is the goodness in people.